The Powerful Image Of Jeffrey Earnhardt On TV 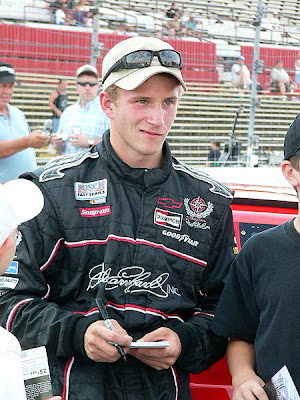 The spectacle of NASCAR racing is a mix of images and sound. Some of the images are majestic and some are powerful because of their simplicity. Tuesday, the folks at NASCAR Now delivered an image that jumped off the TV screen.

Kerry Earnhardt drove in several NASCAR series with mixed success. Ultimately a journeyman driver, Kerry was sometimes called the forgotten Earnhardt with the success of his half-brother Dale Jr. in the Sprint Cup Series.

Now 39 years old, Kerry is the oldest child of Dale Earnhardt Sr. and his first wife. The couple divorced when Kerry was only one. Kerry had very little contact with Dale Sr. until he was in his mid-teens. Now semi-retired, Kerry was on NASCAR Now speaking with host Mike Massaro about a new project he has been working on for a while now.

The project that Kerry was discussing was standing just to his right. The first images of Kerry's son Jeffrey were startling.

Not yet 20, this young man is about to embark on a limited Nationwide Series schedule this season after working up from the sportsman ranks and through the Camping World East Series. To say he is the spitting image of a young Dale Earnhardt Sr. is perhaps an understatement.

"It's a little bit eerie to see him and listen to him talk," said ESPN.com's Terry Blount. He pointed out that Jeffrey is fortunate to have his father Kerry to guide his career. Kerry has seen both the good and bad sides of racing and can provide the kind of firm foundation that neither Dale Sr. or Junior were able to experience.

"We raced together in that Camping World deal," said Jeffrey about Austin Dillon. "We never had any problems and he is a pretty good kid." Dillon is the grandson of Richard Childress and will be going head-to-head with Jeffrey for the Nationwide Series Rookie of the Year title in 2010. Dillon will be driving the black #3 car for Childress. The irony was not lost on Earnhardt.

With a dry smile on his face, Jeffrey added "I hopefully look forward to beating him." It was a smile that brought back memories.

The tone of voice, the mannerisms and the facial features made this interview perhaps a preview of the new face of NASCAR. At a time when the sport needs some additional momentum, especially to help with the crowds at the tracks, having another Earnhardt will only be a plus.

"Is it in the genes?" asked Blount. "We will find out." Jeffrey will debut in Dover at the Monster Mile and run a total of seven Nationwide races in 2009. This will keep his rookie status intact and allow him to run the full 2010 schedule for the rookie title.

TDP encourages comments from readers. Just click on the comments button below and follow the easy instructions. The rules for posting are located on the right side of the main page. This is a family-friendly website, please keep that in mind when posting.

Thanks for taking the time to stop by The Daly Planet.
Posted by Daly Planet Editor at 11:00 PM 34 comments: