Email and comments are continuing to come in about the Chicagoland NEXTEL Cup event on TNT Sports. They are not about the announcing, or the competition, but rather about a "shift in time" that seemed to occur for some fans during the race.

In today's world, so many of us are comfortable with a wide array of media devices in our home. NASCAR fans love everything technical, and are almost always doing "something else" while the main TV coverage is on. These days, the options are almost endless.

Fans have DirectTV's Hot Pass, the pay-per-view in-car channels on cable TV, many options on the NASCAR.com website, and a tremendous amount of audio-only options available on satellite, Internet, and even telephone services.

One of the chief complaints of the past was that the NASCAR.com Internet video and audio services lagged behind the actual race because of technology issues. It was basically a difference in the pathways that signals took to get to the "home user" that caused this delay.

Last week in Chicago, TNT went to commercial with all of the broadcasting elements in sync, but it is being suggested they did not emerge that way. Daly Planet emailers are saying that out of the TV commercial, the TNT broadcast suddenly lagged behind the Internet services provided by the NASCAR.com website.

The TrackPass Pit Command, Scanner, and Race View services were now ahead of the actual race. Some emailers indicated it was as much as thirty seconds ahead, and it had been slightly behind during the entire event up to that point.

For the remainder of the event, folks are saying that the NASCAR.com site was consistently ahead of the TNT race broadcast. This seems a little hard to digest, as there are also DirecTV and PPV in-car feeds going on simultaneously.

The key part of this "time delay conspiracy theory" is that when the race was over, and Tony Stewart was done climbing the fence, TNT went to commercial. When the break was done, Tony was already in Victory Lane ready to hop-out of his car.

What they are saying is now that the race was over, TNT cut-out the delay and went back "live" because it no longer mattered if NASCAR.com's services were lagging. The race itself was over.

As these things go, there is always one little item to make even the biggest skeptic think a bit about both sides. This time, its simple. The biggest objection to the TrackPass services on NASCAR.com is their delay compared to the TV coverage.

Chicagoland was the last race for Turner Network Television of their short summer package. As viewers know, the network had never been shy on doing whatever it wanted to promote things in any way during the races. Remember Wally's World?

So, here is the head-scratcher. The NASCAR.com website is not owned by NASCAR. It is owned by a company that pays NASCAR a fee to be its online provider of content. The NASCAR.com staff is not located in the sport's "hometown" areas of Charlotte or Mooresville, North Carolina.

One emailer who "says" he was present on pit road said the crews were complaining that the TV coverage on their satellite dishes was suddenly behind the race itself. I am not one to buy into "conspiracy theories," but if anyone has some additional information about this issue, or thinks this is just nuts, please let us know.

Unfortunately, I am one of the people who actually....just watched the race on TV.

The Daly Planet welcomes comments from readers. Simply click on the COMMENTS page or email editor@thedalyplanet.tv if you wish not to be published. Thanks again for stopping by.
Posted by Daly Planet Editor at 11:26 PM 9 comments:

Brent Musburger Will Host "The Brickyard 400" On ESPN 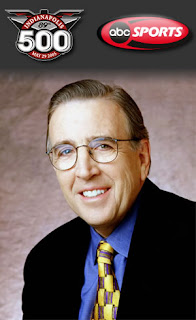 The production executives in Bristol, CT made it official today with the announcement of the on-air line-up for ESPN's coverage of the Brickyard 400 weekend. The cable sports network is returning to NASCAR's top series for the first time since 2000.

In a role that he made very memorable for NASCAR fans at Daytona in February, Brent Musburger returns as the "telecast host." It is the same role he plays for the Indy 500, which puts him alone in a designated "host" position to provide transitions between telecast elements. Basically, it allows him to "oversee" both the infield and announce booth teams.

ESPN's Busch Series team graduates to the big time in less than two weeks as Dr. Jerry Punch, Rusty Wallace, and Andy Petree will call the race from the booth. This is no surprise, as ESPN has been fine-tuning this group since February on the Busch circuit. As a total newcomer, Andy Petree has been the stand-out in this crowd.

Patrolling pit road will be a rather unique mix of talent. NASCAR favorites and grizzled veterans Mike Massaro and Allen Bestwick bring to the table a ton of credibility and racing knowledge for the network. Newcomer Jamie Little has been polished and professional, but has had a bit of a tough time with follow-up questions in live interviews. Finally, the eclectic Dave Burns has earned himself a spot in the big leagues again with his ability to poke fun at himself while still giving fans the information they desire.

When push came to shove, ESPN hung tough and kept their earlier word that Suzy Kolber and Brad Daugherty will man the Infield Studio for the weekend. In Chicago, the professional Kolber found Daugherty to be not exactly the "expert" at answering her many questions. For the Brickyard, look for ESPN to move either Wallace or Petree down to the Infield Studio to provide that extra punch for NASCAR Countdown.

Finally, former crew chief Tim Brewer made the cut and is going to be the king of the cut-a-way car and "tech center" for the network. Brewer is a work in progress, and fans either love or hate his unique style. He is plain spoken, and seems to be a bit trapped in the tightly structured world of ESPN. Maybe, dealing with NEXTEL Cup issues at last will allow him to break through and become the "Jeff Hammond" of ESPN.

The network has moved qualifying and happy hour coverage to ESPN2, which seems to defeat somewhat the importance of their return to NASCAR. ESPN has the final seventeen NEXTEL Cup races, with the entire "Chase" being telecast on the ABC broadcast network by ESPN's production team.

ESPN2 will also carry the Busch Series race from O'Reilly Raceway Park on Saturday night. Marty Reid and Randy LaJoie will be in the booth, with Vince Welch, Shannon Spake, and Jack Arute on pit road. This is a tough weekend, with two racetracks in the same town, and practice and qualifying both affected by weather, as we have seen in the past.

As the clock continues to tick, ESPN has officially put out their starting line-ups and set their telecast times. All that is left to do is enjoy the NEXTEL Cup off-week, and hope that ESPN's return to NASCAR's biggest series will invoke memories of the network's past glories, and not continue memories of the last six races on TNT.

The Daly Planet welcomes comments from readers. Simply click on the COMMENTS button below, or email editor@thedalyplanet.tv if you wish not to be published. Thanks again for stopping by.
Posted by Daly Planet Editor at 8:30 PM 9 comments: