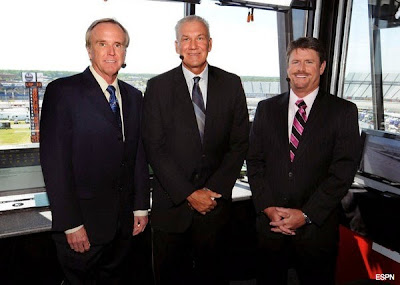 College football is underway and originally the Nationwide Series race was protected by more than thirty minutes of "safe time" between programs. Since then, the college football game live on ESPN2 went into a lightning delay.

Now, with less than thirty minutes left to the NASCAR pre-race show, the decision is what do to at the top of the hour. If football is still in a delay, it will probably be NASCAR. If football has the players back on the field, expect NASCAR to wait it out.

Nicole Briscoe is hosting the pre-race show with Rusty Wallace and Brad Daugherty. She has been in these kinds of situations before and has proven to be a cool customer on the air. It looks like this might be another test for the pre-race crew.

This is a high-speed track where action happens fast but passing happens slow. That should make sense once the coverage begins. Two distinct grooves high and low are being used in the turns, but the frontstretch with the dogleg again is the challenge for the drivers. Yes, there is still grass in the infield.

The race is once again going to feature some Sprint Cup Series cross-over drivers. We need to pay attention to how the coverage balance the overall race with the "regulars" going for the driver's championship this season.

This post will serve to host your comments on the ESPN2 coverage of the Nationwide Series from Atlanta. To add your TV-related comments, just click on the comments button below. This should be interesting.