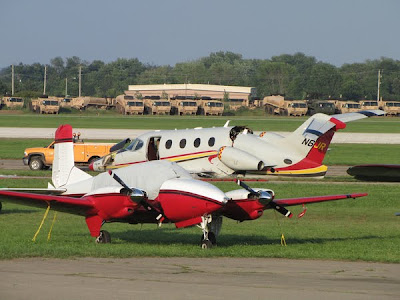 First of all, best wishes for a speedy recovery to veteran NASCAR owner Jack Roush. He was involved in an accident while landing his private jet at the airport in Oshkosh, WI.

Arriving for a major airshow, Roush experienced a hard landing and his airplane broke apart. He experienced some cuts and bruises, but walked out of the plane under his own power. He and his female passenger were transported to the hospital and reported in stable condition. The photo is from AVWeb via reporter Bob Margolis.

Sports Media Watch updates the TV ratings for the Brickyard 400 on ESPN:

SPEED's Race Hub continues to develop the new one-hour weekday shows. Wednesday, Marcos Ambrose comes to the studio to talk about his impending departure from JRG/Daugherty Motorsports. Reporter Danielle Trotta is at RCR to speak with Clint Bowyer and Ray Dunlap will update the truck series before the first race at Pocono.

While the Sprint Cup and truck series are in Pocono, the Nationwide Series is at Iowa Speedway and live on ESPN2 Saturday night. This stand-alone race lets ESPN put together an interesting announce team in the booth.

It will be Ray Evernham and Ricky Craven teamed as the analysts with Vince Welch calling the play-by-play. We have consistently urged the network to use a different team of announcers on Nationwide Series races once Dale Jarrett and Andy Petree move over to the ESPN Sprint Cup Series coverage. This Iowa trio should be fun to watch.

Opening a relationship with VERSUS is a positive step. This Comcast-owned network is growing quickly and stands to become a sports TV powerhouse when Comcast's acquisition of NBC becomes final. We will pass along more information about announcers and air dates when they become available.

There is no NASCAR Now program on Thursday as ESPN2 has live golf coverage. This also played a role in the fact that SPEED will originate the practice and qualifying coverage from Pocono this weekend for the Sprint Cup Series.

The good news is that another extended post-race show will air on ESPN after the Pocono race on Sunday. ESPN's first effort last week at Indy was outstanding. This is exactly what fans have been requesting. ESPN has blocked out 5:30 to 7PM on Sunday for a combination of post-race coverage and SportsCenter highlights.

We welcome your comments on these topics. To add your opinion, just click on the comments button below. You can email with comments or suggestions on other topics at editor@thedalyplanet.tv anytime. Thanks for taking the time to stop by.
Posted by Daly Planet Editor at 12:02 AM 19 comments: