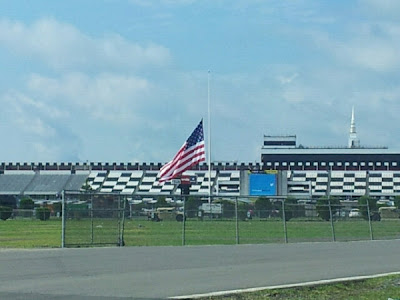 Here is the complete Pocono Speedway release on the incidents involving NASCAR fans, weather alerts and the aftermath:

As reported yesterday, a long time member of our Pocono Raceway family, a spectator has passed away following a lightning strike. According to Monroe County Coroner Robert Allen the name of the deceased is 41 year old Moosic, Pennsylvania resident Brian Zimmerman Additionally; nine other individuals were transferred to local hospitals as a result of two separate lightning strikes.

On behalf of the entire staff here at Pocono Raceway, we are deeply saddened by yesterday’s tragic events. As mentioned, our fans are like family to us and we express our deepest condolences to the individuals and families involved, especially Mr. Zimmerman’s.

We work in conjunction with NASCAR regarding safety of fans, teams and other attendees throughout the course of our race weekends. Additionally, we are in constant communication with local and national agencies regarding weather conditions and emergency services.

At approximately 5:01 p.m. Eastern Time, the first lightning strike occurred on property inside our Grandstand Parking area, located near Gate 5A. A Pocono Raceway Grandstand Fire unit was stationed in the vicinity and witnessed the actual strike. The response was immediate as the unit reported the incident to our control tower and advised spectators were injured. CPR was started immediately to Mr. Zimmerman by a friend on the scene.

Within a matter of 3 minutes, medical personnel and additional emergency services reported on the scene and took control of treatment to individuals. EMT responders were approached by additional individuals who reported symptoms related to the lightning strike. Those affected were taken to the Raceway Medical Centers, where they were examined and transported to local area hospitals for treatment and further evaluation. A total of nine individuals were treated as a result of the initial lightning strike.

At approximately 6:35 p.m. Eastern Time, the control tower was notified of a second possible lightning strike in the vicinity near Gate 3. The individual was immediately transported to Pocono Raceway’s Infield Medical Center where they were initially treated for minor injuries before being transported to Pocono Medical Center in Stroudsburg, Pennsylvania for further evaluation.

As stated last night at 7:40 p.m. Eastern Time, Mr. Zimmerman was confirmed as deceased. Additional information regarding the other nine individuals involved was not yet available.

At this point in time, the one individual that was in critical condition has now been upgraded to stable. Some have been treated and released. Others involved are pending release as early as today and all are in good spirits.

The safety of all guests to Pocono Raceway is of the utmost importance to our entire staff. This tragic event is at the forefront of all of our thoughts and prayers. We will learn from the incident and continue to implement strategies to help ensure the safety of fans and all attendees at future events at Pocono Raceway.

We are in the process up establishing a Memorial Fund is for victims of this incident. More information will be released a soon as possible.

There are many story links to this tragedy online. The picture above is from Twitter via Charlotte Observer reporter Jim Utter. Comments may be added below.
Posted by Daly Planet Editor at 2:11 PM 28 comments: 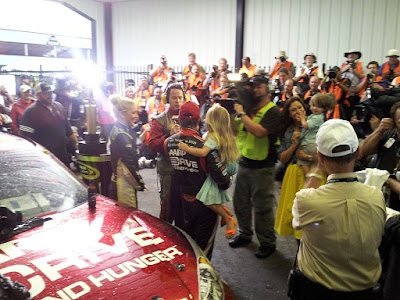 Well, it's over and Jeff Gordon won. The race was delayed by rain, which put the ESPN Infield Pit Studio team on overtime. Nicole Briscoe and Ray Evernham were featured in this portion of the program. Evernham's analysis and opinions of current issues in the sport is a welcome addition to the studio team.

Junior fans were upset that ESPN was in commercial twice when he took the lead, but once again we have all seen the same commercial rotation from the three Sprint Cup TV partners for six years now. ESPN will begin the ESPN Non-Stop split-screen format for the second half of each Chase race.

Early storylines were out the window and prior to the final rain delay it was a battle of pit and fuel strategies. Pocono has again proved to be a track that has racing for a few laps after restarts and then settles into strategy. Mother Nature is the only thing that can change it, apparently.

Funny moments included the pit studio leaking from the rain and Marty Smith just getting soaked on pit road while standing in the downpour. During the post-race, the Pocono site went off the air due to lightning, but returned after a commercial break. Bestwick and Briscoe cannot be rattled and both dealt with a wide variety of situations in this telecast.

Post-race update: Here is the story from Brian De Los Santos of CBSSports.com on the lightning stike.

A lightning strike in the parking lot at Pocono Raceway after a NASCAR race Sunday killed one person and injured nine others, racetrack officials said. It wasn't immediately clear if all 10 people were actually struck by lightning in the parking lot behind the grandstand, nor was it known whether one or multiple strikes occurred.

Two people were taken to the hospital in critical condition after the strike, racetrack officials said. President Brandon Igdalsky said one of them later died at Pocono Medical Center, but he provided no further details.

"Unfortunately, a member of our raceway family here, a fan, has passed away," he said. One person remained hospitalized in critical condition at Lehigh Valley Hospital Center, said Bob Pleban, a track spokesman. The other five people were taken to various hospitals with minor to moderate injuries, he said.

The race was called because of rain, with 98 of the 160 scheduled laps completed. The track posted warnings on its Twitter page near the end of the race encouraging fans to "seek shelter as severe lightning and heavy winds are in our area."

Thanks to ESPN the Magazine's Ryan McGeee for the above photo via Twitter. We invite your opinion on the telecast. Comments may be moderated prior to posting.
Posted by Daly Planet Editor at 1:00 PM 28 comments: