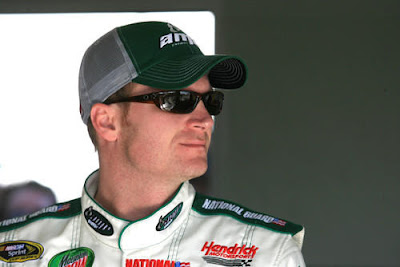 The nice long day of NASCAR programming on Friday will conclude with Dale Earnhardt Jr. making an appearance at the SPEED Stage on "Trackside." The Darlington crowd outside the track should contain some rather enthusiastic fans.

Coverage begins at Noon Eastern Time on SPEED with the first Sprint Cup practice session for ninety minutes. The NASCAR on Fox team of Mike Joy, Larry McReynolds and Darrell Waltrip will be calling the action. On pit road will be Matt Yocum and Dr. Dick Berggren.

In between sessions, John Roberts will host a thirty minute edition of NASCAR Live from the SPEED Stage at 1:30PM. Bob Dillner will be joining Roberts to report from the garage area.

Fox will break-out all the big guns for the final Sprint Cup practice session at 2PM. Joy, Waltrip and McReynolds will be joined by Chris Myers and Jeff Hammond in the Hollywood Hotel. Krista Voda will join Berggren and Yocum on pit road.

The qualifying for the Nationwide Series is up next at 3PM. Mike Joy will return, and this time he will have Hermie Sadler and Jeff Hammond in the booth as analysts. Krista Voda and Matt Yocum will cover the pit road area.

The Go or Go Home show is up next at about 4:30PM and this show has really regained its focus on the teams outside of the Top 35. It will be Steve Byrnes hosting, and he will be joined by Bob Dillner from the garage area.

At 5PM the "big three" are back as Joy, Waltrip and McReynolds call the Sprint Cup Series qualifying. Dick Berggren and Krista Voda will handle the interviews from pit road. This should be a very interesting qualifying session on the newly-paved track. Both time and speed records will be smashed, it will only be a question of by how much.

NASCAR fans will be switching to ESPN2 for NASCAR Countdown hosted by Allen Bestwick at 7PM. The pre-race show this week will feature Rusty Wallace and Brad Daugherty joining Bestwick in the Infield Pit Studio. With Wallace's son Steven on-a-roll in this series, it could lead to some interesting conversations between Brad and Rusty.

Wallace will then move upstairs and join Dr. Jerry Punch to call the Nationwide Series action along with Andy Petree. These three will be supported from pit road by Shannon Spake, Jamie Little, Dave Burns and Mike Massaro. Tim Brewer will be in the Tech Center and Matt Kenseth will be the in-race reporter. This telecast is scheduled until 10PM.

It should be no surprise that SPEED will present Trackside at 10PM following the race. This one hour show is hosted by Steve Byrnes and features Darrell Waltrip, Larry McReynolds and Jeff Hammond on the panel. Rookie driver Michael McDowell is going to be the warm-up act for Dale Earnhardt Jr. who will be the second guest.

This should be a great opportunity for this crew to follow up with Junior at a time when he is certainly writing a new script for his life. ESPN the Magazine features Junior on the cover this week in an article written by ESPN's Marty Smith. In it, Junior reveals a lot of the confusion and pain he has dealt with since his father's passing years ago. Combined with his on-track activity and love for Darlington, this could be a very memorable TV show for Junior fans.

NASCAR TV is on-the-air non-stop from Noon through 11PM Eastern Time. The variety of racing series, the different TV networks and the diversity of the programming should make for a fun day.

This post will serve to host your comments on the Noon through 7PM programming on SPEED. There will be a new post up at 6:30PM for NASCAR Countdown and the Nationwide Series race. Later, there will be a column reviewing Trackside.

To add your opinion, simply click on the COMMENTS button below and follow the easy instructions. The rules for posting are on the right side of the main page. Thank you for taking the time to stop by The Daly Planet.
Posted by Daly Planet Editor at 10:05 PM 16 comments: