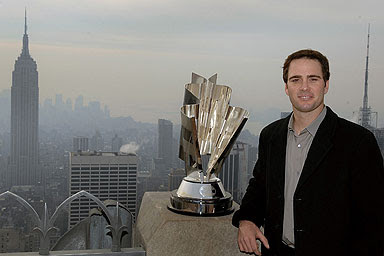 Tonight we will be watching with you the post-season banquet for the Sprint Cup Series on the ESPN Classic Network at 9PM Eastern Time.

The program is going to be originated live and will be hosted by ESPN's Dr. Jerry Punch. The musical guest is Matchbox Twenty and the comedian is John Pinette.

Believe it or not, NASCAR has a deal in the works with Kevin Costner and tonight he will be providing a historical feature in the banquet telecast. Click here to read the story about his bigger involvement in other NASCAR projects.

Tonight is going to be unlike any NASCAR banquet I have ever seen. The major US automakers spent the day asking the Federal Government for financial help in order to survive the next few months.

The news of the demise of Petty Enterprises as an entire organization still has many in shock and there may well be more news of that kind even before the telecast. This is a very tricky road to walk where a live TV show is concerned.

Pay too much attention to the economic topics and the wind goes out of the sails where the racing and the top ten drivers are concerned. Meanwhile, trying to pretend that everything is just fine gives the illusion of millionaire drivers who could care less about the struggles of everyday Americans.

One positive note is that Punch is a veteran host and is outstanding in these types of situations. He is well-spoken on a big stage and was a good host of this event in the past. Hopefully, the participants from the teams and the sanctioning body who also speak will reflect the reality of the evening in terms of striking a good balance in their comments.

ESPN Classic has been the home to this event since the new TV contract began in 2007. The show will re-air on ESPN2 on Dec. 8th from 2 to 4PM Eastern Time.

We welcome your comments before, during and after this telecast. Before you submit your opinion, please check the rules on the right side of the main page. Comments will appear shortly after they are submitted. Thanks for taking the time to stop by on what should be a very interesting night for NASCAR.
Posted by Daly Planet Editor at 6:59 PM 397 comments: