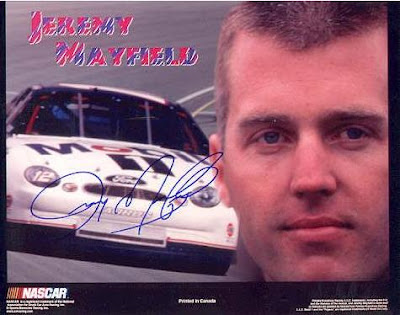 Update: Mayfield's appearance on SPEED's Race Hub show is now done. Leaving this post up for one more day to continue comments. Questions are do you think he made any sense, did you learn anything new and was it appropriate of SPEED to invite Mayfield on national TV?

The Tuesday version of SPEED's 7PM Race Hub show is going to feature a familiar face. Jeremy Mayfield will be in the studio talking with host Steve Byrnes about his life since his NASCAR career ended with a bang.

Mayfield's twisted saga began back in May of 2009 with a failed random drug test administered under NASCAR's new drug policy. The sport's drug czar first said it was a drug of concern. Then, the late Jim Hunter ruled out alcohol in a statement to the media. Eventually, the legal process revealed that Mayfield tested positive for the amount of methamphetamine consistent with someone who is addicted to the drug.

Mayfield's inconsistent statements and behavior early on led to a logical conclusion that NASCAR was right. Mayfield told ESPN's Marty Smith that he had never been informed of what drug had caused him to fail the test. That was not true. Mayfield famously got lost on the way to another random test at a lab after taking and failing one administered at his home.

Unfortunately, in the middle of the chaos NASCAR made a very bad decision. Some officials involved in the sport back in 2009 chose to climb right down in the gutter beside Mayfield. Statements obtained by NASCAR from Lisa Mayfield, Jeremy's stepmother, were presented to back-up the drug claims. The statements were completely outrageous.

In August of 2009, Lisa Mayfield was arrested by police for public intoxication and being what one police officer called "very high" at the time. She had been found banging on the door of Jeremy Mayfield's home by a neighbor. When Mayfield and his wife arrived back at the house, his stepmom threatened to kill them in the presence of police.

This was the woman NASCAR put forward as the "person of character" who provided a sworn affidavit that Mayfield had used meth at least 30 times in her presence and that she had seen him cooking the drug. Suddenly, because of this one poor choice NASCAR faced an issue that has still never been resolved. Just what exactly were they defending?

As adults, many of us have dealt with random drug testing in the workplace. It's a common way to make sure that safety comes first and also to catch and then help fellow employees who may be trapped in the cycle of addiction. The policies are made clear when someone signs on the line for a new job.

From the start, Mayfield insisted that NASCAR paid his stepmom and tried to solicit damaging statements from other family members in return for cash. In the media, former Mayfield co-workers from Ray Evernham to then crew chief Tony Furr painted a picture of a hardcore racer who did not drink alcohol and had never smoked a cigarette.

If NASCAR had just held the line professionally, Mayfield would not have a story to tell. A failed drug test led to a failed retest and then the end of his participation in racing. What makes Mayfield a great guest for Race Hub is that his allegations against NASCAR are of a personal nature. Like a good used car salesman, Mayfield exploits the fan distrust of NASCAR Chairman Brian France in every interview.

Race Hub host Steve Byrnes is good natured, but he simply does not allow guests to throw stones at the sport. Since being named the solo host, Byrnes has presided over the growth of a very important media property for SPEED. The dynamic of a TV series produced in the backyards of the NASCAR shops and just down the street from the Charlotte Motor Speedway is pretty powerful.

No one knows exactly what Mayfield will say on Tuesday. Others nabbed by NASCAR's random drug testing like Randy LaJoie have already completed mandatory treatment programs and been reinstated. It's doubtful that Mayfield, who has never admitted any drug problem or sought treatment for one, will back down an inch.

Hopefully, this is only the beginning for Race Hub where welcoming in controversial guests is concerned. SPEED needs to reinforce that this program is not another cookie-cutter show from the NASCAR Media Group, but rather an independent news and interview show that can make a name for itself. Mayfield should start that ball rolling quite well.