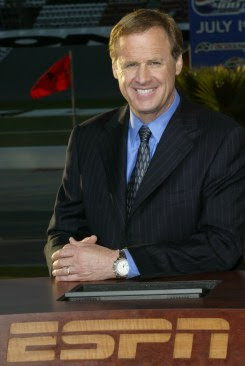 "I hope to God you didn't do what they said you did," remarked ESPN Nationwide Series analyst Rusty Wallace. He wasn't in a TV production meeting yelling at a pit reporter or at the shop discussing the on-track antics of his racing son, Steven.

Wallace was standing toe-to-toe with his own employee, Bryan Berry. On Thursday, Berry was suspended indefinitely from NASCAR for using a racial slur against the only African-American driver in the Nashville Nationwide field named Marc Davis.

During the Nashville race, TV cameras showed Davis turning left into the garage area without signaling out the window. The move caught officials, teams and one driver in particular off-guard. That driver was Brendan Gaughan. He drives for Rusty Wallace. Gaughan's crew chief is Bryan Berry. Gaughan T-boned Davis live on national TV right on pit road.

Although able to limp back out onto the track, it was clear that Gaughan's race was done. Later, he was heard yelling on the radio to keep Davis in the garage area until the race was over so the two could have a conversation. On most nights, cooler heads would prevail and discussions would take place once everyone had calmed down.

Unfortunately, Berry and a group of his crew members stormed over to Davis immediately after the race. Although he was not yet out of his car, Berry allegedly yelled at Davis through the driver safety net on the window and let his feelings on the incident be known. Apparently, he stepped over the line.

Meanwhile, Georgetown University graduate Gaughan was on the air with ESPN claiming the Davis move was an example of a Howard University education. That school is a sponsor of Davis and his Nationwide efforts. Howard is an HBCU, one of the Historically Black College and Universities.

Luckily for Gaughan, his Georgetown days were spent rooming with NBA star Allen Iverson while both played basketball for the university. Well, playing may not be the exact word that Gaughan uses to describe his college basketball career, but he was a team member. Although sounding like an idiot on TV, NASCAR is allowing Gaughan to drive another day.

Not so fortunate was Berry, who added a little something into his rant at Davis that set off alarm bells at NASCAR HQ. Wallace called it an "alleged racial slur." NASCAR spokesman Ramsey Poston called it "an inappropriate comment that won't be tolerated." That seems to be a polite way of saying Berry dropped the N-bomb.

So, this leaves team owner Rusty Wallace front-and-center after a week that the Nationwide Series would probably like to forget. First, Gaughan throws barbs at the educational level of a university that produced Ed Bradley of 60 Minutes and legendary Supreme Court Justice Thurgood Marshall.

Meanwhile, Berry is allegedly dropping the N-bomb on Davis through his window net in the garage while sponsors and others watch and listen. As if that were not enough, a skinny white kid is bashing the heck out of a hand-painted guitar that symbolizes Music City USA and the entire Nashville area in front of stunned fans in the stands.

The only thing worse than dealing with these events once is having to deal with them all over again. That is exactly what Wallace will be doing in Kentucky this weekend as he works for ESPN.

Not only will Wallace be reviewing the Gaughan and Berry incidents on the pre-race show with Allen Bestwick, but when Wallace looks to his left in the Infield Pit Studio he will see all seven feet of Brad Daugherty looking back at him.

The ESPN team will start the weekend with practice coverage Friday night at 6:30PM ET on ESPN2. They will return on Saturday at 5PM for qualifying and 8PM for the pre-race show.

On most nights, Wallace would then turn things over to Dale Jarrett at 8:30PM to call the race. That would give Wallace a break and let the telecast shift gears. But, not this Saturday. Jarrett has the weekend off.

It will be Wallace who will climb up into the booth and call the entire race with Jerry Punch and Andy Petree. On the Kentucky track will be Gaughan with a new crew chief. Also on the track will be the WHUR Radio sponsored Toyota of Marc Davis. Amid last week's commotion, it was Davis who quietly left Nashville without calling attention to himself and declined to comment about the incident.

Finally, Kyle Busch will be flying-in from Michigan to once again try and dominate this second-tier series and then leave town in a hurry. After Nashville, the stories unfolding in this Kentucky event will present the first big challenge to the NASCAR on ESPN team as they gear-up for Sprint Cup coverage in a little over a month.

TDP welcomes comments from readers. Just click on the comments button below to add your opinion on this topic. This is a family-friendly website, please keep that in mind when posting. Thanks for taking the time to stop by.

There will be a new post up later for your comments on the Friday TV coverage. The full weekend TV schedule including announcers and show guests is posted on the right side of the TDP main page.
Posted by Daly Planet Editor at 10:30 PM 60 comments: