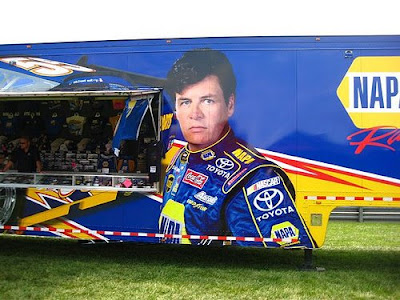 It certainly is a common saying that racing mixes the highs and the lows on a very regular basis. Michael Waltrip has seen both over the last several seasons. After driving his ailing car quietly into the garage early in the race at Pocono, it was clear that this season was not going to be a high point for Waltrip.

Monday was going to bring a new series of challenges, but none perhaps would be more public than Waltrip driving to The NASCAR Media Group studios in Charlotte to tape another edition of This Week In NASCAR.

Host Steve Byrnes would be talking with Waltrip and fellow panelist Chad Knaus. Byrnes has quietly exerted his influence over this program and shaped a brand new Monday night show for SPEED. This week, he put his enthusiasm in high gear to help Waltrip get out of his funk and have some fun with Knaus.

Sure enough, Waltrip said right-up-front that he was having a tough day. After the customary opening chat, Byrnes teased Waltrip about being late for the show and then confirmed for both Waltrip and viewers that it would be the Pocono highlights first on the agenda. Finally, it looks like TWIN has put the horse before the cart at last.

The interaction between Knaus and Waltrip was once again outstanding. Knaus helped the viewers at home to understand many of the technical aspects of the Pocono race, including the calls he made to bring Jimmie Johnson home with a good finish. Meanwhile, Waltrip returned to adding to the Knaus comments and then harassing Knaus about talking too much. Things were back to normal.

Waltrip got into full fun mode when talking about the Nationwide Series race in Montreal. Once again professing to be one-eighth Canadian, Waltrip was pumped about the first time for NASCAR on rain tires in a points race. Knaus was confused about the number of cars that seemed unprepared for the rain. Little did he know there were many teams that were unprepared for a lot more than that.

Once again this week, the transition from the race review to the race preview seemed natural and well-timed. Soundbites from many drivers about Watkins Glen set the table for Waltrip's great memory of being shown the classic road course by veteran racer Willy T. Ribbs.

The video features used in this show really helped to put both Pocono and Watkins Glen in great perspective. During all the transitions this show has undergone in 2008, the one constant has been the outstanding editing of features like Scanner Chatter and the race previews.

Byrnes has always been good at holding the company line and he delivers all the promos that SPEED mandates must appear inside this program. One missing element this week was the email questions from viewers appearing in the middle of the show. Byrnes held them until the end, which eliminated the Sprint Cup questions being raised during the Cup section of the show.

One surprising moment was the outstanding extra feature on the resurgence of the #18 team with Kyle Busch. This was perhaps the best feature this program has aired all season long. More content like this will go a long way in keeping this TV series on a roll.

Credit goes to Michael Waltrip for putting his weekend issues aside and making this episode of TWIN another interesting TV adventure. Chad Knaus and Steve Byrnes have combined to become an effective team in making Monday nights on SPEED fun again.

The Daly Planet welcomes comments from readers. Simply click on the COMMENTS button below and follow the easy instructions. The rules for posting are located on the right side of the main page. Thank you for taking the time to stop by.
Posted by Daly Planet Editor at 8:06 PM 53 comments: 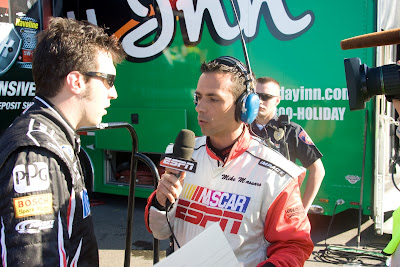 This week Allen Bestwick hosted an "all ESPN" edition of the Monday version of NASCAR Now. This one hour roundtable is a group discussion that has a different cast every week. Sometimes, the show has a theme. On this Monday, Bestwick welcomed all four of the NASCAR on ESPN pit reporters to the show.

Bestwick took the lead in the highlights and directed the conversation to the pit reporters that covered specific drivers. This put a very different perspective on the program and allowed first-hand information to flow freely.

While ESPN viewers are used to Mike Massaro on this program, Jamie Little was the surprise of the panel. Moving over to NASCAR from the IRL, Little was able to express herself in a much more dynamic manner in this studio setting. Viewers were finally able to get a good feeling for her personality and sense of humor over the course of this hour.

Dave Burns began his pit reporting life as the class clown and has now migrated into a potential studio host himself. His TV resume is substantial, but he has always operated under-the-radar where his NASCAR appearances have been concerned. ESPN has given Burns several opportunities to expand his pit reporting and serve as host for the pre-race show on the Nationwide Series.

Shannon Spake is the newest member of the group and she held her own in this free-for-all format. Spake has struggled in some aspects of her ESPN TV life, but has been coming along now that she has been made a permanent member of the pit reporting crew.

Bestwick led his panelists through the race recap team-by-team. It was this point in the show that viewers began to understand how much information flows to the pit reporters when they are covering multiple teams. All four gave outstanding answers to Bestwick's questions and painted a great picture of what happened at Pocono.

Massaro was best when he spoke about the Montreal experience. Using his normally good humor, Massaro reminded viewers that the Canadian crowd stayed during the rain until the end. He took the high road and left out the negative issues that affected the event.

Bestwick took the time to review some questions about how TV pit reporters operate. The answers included the fact that pit reporters are assigned by driver, that the winning driver takes his pit reporter along to Victory Lane and that all the reporters make their own notes.

Winding-up the show was the Watkins Glen preview where the panelists did a solid job of recapping the race last season and picking their favorites for next weekend. Massaro suggested that perhaps Marcos Ambrose has something to prove after losing in Montreal. Hopefully, the TV crew will follow-up on that issue on Sunday.

This was another successful theme show for this Monday franchise. Next week, after a road course race, the panel will consist of Boris Said, Ray Evernham and Randy LaJoie.

The Daly Planet welcomes comments from readers. Simply click on the COMMENTS button below and follow the easy directions. The rules for posting are located on the right side of the main page. Thanks for taking the time to stop by.
Posted by Daly Planet Editor at 6:01 PM 26 comments: