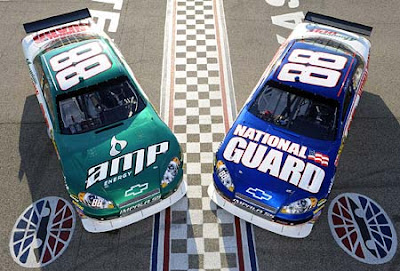 Sometimes this season, it has been a bit tough to fill the thirty minutes of Wednesday's NASCAR Now on ESPN2. Not this Wednesday.

The series scored a bulls-eye with the delivery of Dale Earnhardt Jr. and Rick Hendrick into the NASCAR Now line-up, and then directly into fan's homes nationwide. There was no other game in town.

Host Erik Kuselias was well-informed about the issues at hand, and the show used the talents of Terry Blount and Tim Cowlishaw in the manner that let them both shine. Everyone knew that for this Wednesday, there was really no other story to be told.

After a recap of the news conference, Terry Blount appeared to set-the-table for fans. Blount has become an outstanding TV presence this year, and continues to be a well-spoken and concise "Insider" on this series.

Blount is good when he mixes history and current events, as he was able to do with this big story. He put in perspective the business and family issues that moved Junior in this direction. He consistently keeps things in more of a factual than emotional perspective. In this way, he can deliver any type of story without getting caught-up in the drama.

Kuselias then welcomed Junior on-camera from Dallas. Despite the long day, Earnhardt was in good spirits and responded with an overall theme of optimism mixed with relief. He clearly looked like the world had been lifted off his shoulders.

The questions asked by Kuselias hit all the key points of both the car number and sponsor issues. Then, he added a couple of questions about next season and the expectations of perhaps the largest NASCAR fan base in the sport. In responding, Junior looked a lot older than his thirty-two years. It was clear that this ordeal had been taking a personal as well as professional toll on him.

Tim Cowlishaw was in attendance at the press conference, and spoke with Kuselias about the dynamics and atmosphere at the event. While it was clear that no one was going to be surprised by the facts, Cowlishaw made the point that it was the reality that got people's attention. These are Junior's cars for next season, the Red Army is done, and the Bud Man has walked away into the sunset.

Rick Hendrick is always a calming presence, and his interview with Kuselias helped to spell out the dynamics of both the sponsors and the number issue. Hendrick already had relationships with both Pepsi and The National Guard, so combining them on Junior's car was almost a natural. Hendrick was excellent in speaking about Junior's historical perspective on NASCAR, and what the 88 would mean to him personally for next season. Its clear to see why Hendrick is so successful in this sport.

When NASCAR Now has a story and uses the technology of ESPN and the existing resources in reporters and analysts available to the series, they are tough to beat. Both the Hendrick and Junior appearances were outstanding, and are sure to be on ESPN.com and Jayski.com for some time to come.

When given a story to report and then analyze, Tim Cowlishaw becomes a whole different person than the one we see on Around The Horn. He and Terry Blount worked well in tandem to set-up and then offer reaction to this historic day. If you have a chance to put Wednesday's re-air of NASCAR Now on your DVR...do it.

The Daly Planet welcomes comments from readers. Simply click on the COMMENTS button below, or email editor@thedalyplanet.tv if you do not wish to be published. Thanks again for taking the time to stop-by and leave your opinion.
Posted by Daly Planet Editor at 6:25 PM 12 comments:

The NASCAR.com website was live on-the-air with its Internet TV application at 1:15PM Eastern Time. They were in their own TV studio talking about the Dale Junior issues and even had a free chat room open for the fans. The live media coverage of Junior's announcements had officially begun.

ESPN News was live at 1:30PM with a news anchor, but no NASCAR Now reporter on-camera. The anchor "threw" directly to the feed of the press conference, missing the opening remarks and joining it in progress.

SPEED's Steve Byrnes appeared on-camera in the SPEED studios at 1:30PM, and then transitioned directly to the press conference. He also joined the festivities in-progress, and no SPEED reporter appeared on-camera at the location prior to the beginning of the announcement.

ESPN News carried ten minutes live, and then departed at 1:40PM Eastern Time after learning Junior's car number and sponsors. The network brought in Darren Rovell, the Business Reporter from CNBC, and Brad Daugherty, ESPN's NASCAR "voice of the fans." They both spoke to the branding and marketing elements of the two sponsors, and Rovell addressed Junior's choice of car numbers.

Even as Hendrick and Earnhardt explained their choices and how this transition began, Daugherty was on-the-air on ESPN News speaking about the demographics of Junior's new sponsors. Sensing a conflict, the ESPN News anchor directed the coverage back to the live press conference in the midst of Mr. Hendrick's continuing remarks.

SPEED worked hard to add graphics in support of the comments being made at the announcement, and they worked very well on-screen. ESPN News used B-roll footage, but unfortunately it was the old red number eight car with Budweiser on the side. Ultimately, they did show some footage of the new cars shot earlier at TMS.

While SPEEDtv.com has its message boards, and ESPN.com has its forum, NASCAR.com had set-up a dedicated live "no membership" chat room for this announcement. It was so full, I could not find how many were inside, but it was clear there were hundreds.

ESPN News chose to leave again immediately when the question and answer period began at the live press conference about ten minutes later. They returned to Daugherty and Rovell who further addressed the same issues. Rovell was even asked to address the Dale Earnhardt Sr. merchandising issues and his continued popularity. The conclusion of Rovell was that Junior was getting more money and a new marketing freedom.

Daugherty addressed Junior issues on ESPN News even as Junior himself continued to answer questions from the media live in Dallas. While Claire B. Lang and other NASCAR veteran reporters developed the stories and asked about the issues, ESPN News continued to expound on the generalities surrounding the marketing and financial issues.

At 1:56PM, ESPN was done. Daugherty and Novell signed-off, and left on-the-air live were SPEED and NASCAR.com on the iTV side. Both ESPN and ESPN2 stayed with their normal program schedules.

SPEED and NASCAR.com got some more details on the number selections, the new marketing programs, and the details on how these sponsor agreements took place. There were some good questions from the press, and Winston Kelly did an outstanding job keeping the press conference orderly and a bit informal.

Thirty minutes in, Junior touched on the details of his upcoming season, his feelings about the numbers, and finally gave fans a good view of his thoughtful and sensitive side. Some good conversation followed, and then things went a little bit wrong.

At about 2:15PM, the satellite feed from Dallas ended in mid-sentence with the press questions still in-progress. Both SPEED and NASCAR.com immediately went back into their studios and explained this was a problem originating from Dallas.

Steve Byrnes quickly recapped the Kasey Kahne announcement, and then signed-off this special report and the network returned to regular programming. NASCAR.com immediately had a phoned-in report from Larry McReynolds putting his feelings about the 88 car in perspective. Since McReynolds had a history with Robert Yates Racing, this was a well-placed report.

The Dale Earnhardt Jr. press conference was an interesting media event that showed both the strengths and weaknesses of cable TV networks and the Internet. Credit goes to ESPN for making the effort to carry a portion of this press conference live. SPEED has made this a practice for a while now, and always does a very straightforward job of presenting just the facts.

One hour after the press conference began, only NASCAR.com was still live with their Internet TV application. As the principals of the press conference gathered around two shrouded cars, it was apparent that Hendrick Racing has made one very tactical error. Both SPEED and ESPN left the air before Junior's two new cars were unveiled, and it was clearly not their fault.

Perhaps, in the future, the public relations organizations that host these press conferences will put the TV needs before the needs of the print media. The classic press conference format did not work for ESPN or SPEED, that was very clear.

Simply by announcing the sponsors, unveiling the car, and then bringing on the people involved in the announcements, Hendrick Motorsports would have presented a neat and organized TV media event. Instead, the classic "press conference" format forced both TV networks to leave before either car was unveiled live. That is kind of a big detail.

Finally, as in all big marketing efforts these days, the new "Green Machine" of Junior showed up on-line at NASCAR.com in full color. The Amp hype had begun, and even Dale Junior Amp merchandise could suddenly be ordered at NASCAR.com, although without an image attached quite yet.

For those of us on the electronic and digital media side of the business, this was an interesting day. Two cable networks carried this event live, and approached it quite differently. One major Internet site dedicated several hours to it with both video and chat room applications that involved many reporters and a full TV style studio. For my money, NASCAR.com did the best job today, and showed that it is slowly pulling out of the funk it had been in over the last several years.

Consider this, if the NASCAR.com media viewer had been able to go full-screen, they would have actually offered a TV-style product superior to both ESPN News and SPEED. As technology marches on, one thing is certain. The consumer has more NASCAR TV options than ever before.

The Daly Planet welcomes comments from readers. Simply click on the COMMENTS button below, or email editor@thedalyplanet.tv if you wish not to be published. Thanks again for taking the time to stop-by and leave your opinion.
Posted by Daly Planet Editor at 1:22 PM 22 comments: