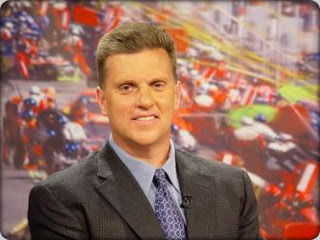 Early Thursday evening, the NEXTEL Cup gang took to the track at Daytona for their final practice. As with every lap on the track for this series, live TV followed along. This practice was shown on SPEED Channel. During the season, TV viewers will see many different faces on these telecasts. Mostly, it is a combination of SPEED announcers with several of the announcers from the network telecasting the actual race.

This day, SPEED showcased one of the best combinations of booth and pit announcers that can be seen on NASCAR TV anywhere. Hosting the telecast was Steve Byrnes, who has emerged as one of the best on-air hosts for both live events and talk shows. He brings to the table an enthusiasm and professionalism sorely lacking in many other NASCAR announcers. This guy certainly is the real deal.

Alongside of Byrnes were his good friends Jeff Hammond and Larry McReynolds. This trio in the booth is magic, and the casual attitude of practice really allows them all to show their knowledge. This group is clearly on their game, and nothing escapes them as the practice grind goes forward. Viewers can learn so much from just sitting back and listening to these "voices of experience."

On pit road for this telecast was Matt Yocum and newcomer Lindsay Czarniak. Yocum is coming off his very successful hosting of Tony Stewart's "Prelude to the Dream" pay-per-view race special, and is the ultimate insider. Yocum also produces Stewart's Sirius Satellite Radio program, which is tremendously popular with fans. Matt just seems to always kind of "be there" at the right time.

Czarniak has been a welcome addition to NASCAR, and has proven to be a hard-working rookie who can take her lumps and hang-in there with the big boys. She has a great ability to put people at ease with her casual style, and the NASCAR gang clearly responds. Face it, we like her.

SPEED's great pictures during practice allow the Director to use lots of in-car camera shots and hang with them for multiple laps. When the action gets thick, its almost as exciting as the race. Everyone knows the guys are trying to find the elusive speed at Daytona, and no one is better at telling viewers about the tiny details of fine-tuning than McReynolds. His unbridled honesty is just so refreshing, and he really brings fans the feel of being at the track with your own crew chief.

One of the best parts of Steve Byrnes in the host position is the fact that he freely asks the questions that viewers and fans want to know. He consistently put both McReynolds and Hammond on-the-spot about NASCAR topics, and they responded. The banter between the announcers and reporters on pit road was often times much better than the commentary heard by fans during the actual race.

All of us who have watched NASCAR for years know that live televised practice sessions can be like watching paint dry. This one on SPEED, however, was just flat out entertaining and very exciting. It was a good TV moment when everything just "came together." The pictures and sound were great, the pit reporters had all the drivers talking, and the booth announcers really gave super information about what was going on, and why.

After watching TNT for several weeks, this SPEED telecast also contained another crucial element missing from the Turner package. These announcers respected each other, and had fun while they were working. The jokes were made at no one's expense, and were in good humor. Even the drivers were smiling while being interviewed at practice, and that was because they could feel the good vibe of the show.

Over the past several months, The Daly Planet has considered various columns about the NEXTEL Cup practice sessions, but they just did not live up to anything exciting. The best part of the last several weeks may have been the horrible green-ish "puffy shirts" that TNT makes Weber and Dallenbach wear when they are doing a broadcast on SPEED. Those should go immediately to the Sports Broadcasting Hall of Fame when the TNT part of the NASCAR package is over. A Seinfeld moment if we ever saw one.

So, hats off to SPEED for hosting a killer practice session at high-speed on the high banks. They had a rock solid line-up of talent who made something normally boring into something very interesting and fun. Kudos to Steve Byrnes for keeping this gang working at a high level by challenging them and then rewarding them for their information. This was a key test session for both the Pepsi 400 and qualifying. Now, if only the race can live up to the practice. We shall see on Saturday night.

The Daly Planet welcomes comments from readers. Simply click on the COMMENTS button below, or email editor@thedalyplanet.tv if you wish not to be published. All email is held in confidence. Thanks again for stopping by.
Posted by Daly Planet Editor at 7:21 PM 5 comments: