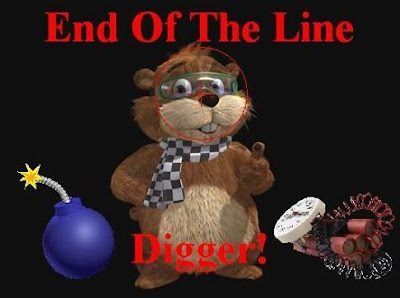 Just when you thought it was over, Digger is in the national news again. Now that the endless animation, the pre-race cartoon and the endless shilling by Darrell Waltrip has faded from your psyche, Digger makes USA Today.

Michael Hiestand is the TV sports writer for the newspaper and he took the time to throw a little zinger in recently to stir things up. Here it is:

Race Buddy, the animated mascot of TNT's NASCAR coverage, last week appeared in an online video sealing a manhole cover on the trackside hole of Digger, the animated mascot of Fox's NASCAR coverage. On one level, that might just seem like some fluff to remind viewers NASCAR coverage has moved from Fox to TNT. But, as Fox Sports Chairman David Hill suggests, corporate calculations shouldn't ignore sensitivities: "Digger won't call or take my calls. He's upset that he's being attacked and mocked. He's terribly upset." Hill's staffers at Fox know not to disturb him when he's trying to contact Digger.

For those of you who have not seen it, click here for the SportsBusinessDaily story by Michael Smith that offers a link to the video. TNT was smart and only emailed this to fans, making it rather hard to find online.

The statement being made by Turner is very clear. The nonsense and hype of Fox is being replaced by the technology and race-focused coverage. Regardless of your opinion of TNT, they certainly took the time to make a statement on perhaps the most controversial part of the NASCAR on Fox coverage.

TDP welcomes your comments on this topic. To add your opinion, just click on the comments button below. This is a family-friendly website, please keep that in mind when posting. Thanks for taking the time to stop by The Daly Planet.
Posted by Daly Planet Editor at 7:00 AM 50 comments: