The Need For SPEED 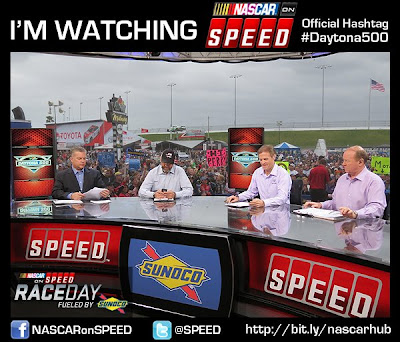 A recent story in Sports Business Daily reported that FOX Sports was involved in negotiations with NASCAR about a new TV contract. The current one expires at the end of 2014. A tweet from a FOX announcer then suggested the new deal may include even more Sprint Cup Series races than the current agreement. That started the ball rolling on a discussion about another key NASCAR TV partner.

SPEED is the cable TV network that facilitates the vast majority of the NASCAR TV programming throughout the season. The network is a staple at the track on Friday, Saturday and Sunday. The coverage includes practice, qualifying and NASCAR news shows. SPEED is owned and operated by the FOX Sports Media Group.

The secret to the shows from the tracks is that these programs are not actually produced by SPEED, but are handled by NASCAR's own in-house TV team. That division used to be called the NASCAR Media Group but was recently downsized and renamed NASCAR Productions. Neither FOX or SPEED have an ownership stake in NASCAR Productions.

Over the past six years, we have repeatedly wondered what the heck was going on at SPEED. Various management teams made decisions that virtually eliminated all traces of NASCAR programming on Monday through Thursday in primetime. "Automotive lifestyle" programming was the order of the day. No other network has aired and then cancelled more of these low-brow reality-style shows than SPEED.

Meanwhile, back at the ranch, other broadcast networks have quietly gone about the business of building or buying a cable TV network for sports. CBS and NBC now have national cable sports networks that allow them to partner on programming just like ABC and ESPN. The odd man out at the table is FOX.

Click here for the story from the Sports Business Journal about the Fox Sports 1 cable network. Never heard of it? You may be hearing that name once the current NASCAR TV contract expires. In theory, it would replace SPEED on the cable dial and shutter the motorsports-themed network.

Closing SPEED and turning it into a national cable sports network run from Los Angeles would put FOX on an even keel with NBC, CBS and ABC. Any TV contract done for the FOX broadcast network could now facilitate what is called "shoulder programming" on cable. For instance, the Preakness might be shown on NBC but all the preliminary races and coverage of the entire day would be on NBC Sports Network on cable.

The sad part of this arrangement would be the end of SPEED as we know it. The network was originally launched as SpeedVision and featured programming split between cars, boats, airplanes and motorcycles. The subsequent purchase by FOX and move to Charlotte, NC was to turn the network into a dedicated NASCAR channel. Those plans never came to fruition.

It seems ironic that the network that hosted more "shoulder programming" for NASCAR over the past decade may be closed. That raises the issue of just what kind of an extension FOX is trying to negotiate for Sprint Cup Series races. The door is open for all kinds of speculation.

Keeping all that weekend NASCAR programming on the new mainstream Fox Sports 1 network would seemingly be impossible. The season runs for ten months and SPEED airs hundreds of hours of programming from the Sprint Cup Series tracks.

It would also seem that other motorsports series from Grand-Am to ARCA would be impacted. The list of programming currently on SPEED also includes Formula One, AMA Supercross and the Barrett-Jackson Auto Auctions.

One peek at the current SPEED on-air schedule should convince skeptics that the network has effectively shuttered the development of new series. From five year-old Pimp My Ride shows to endless Dumbest Stuff on Wheels re-airs, it is clear that something is going on and it is not good.

It is important to note that FOX has two additional cable networks, FUEL and FX, that could be used to distribute additional motorsports programming. FUEL is already undergoing a transition with UFC shows airing while FX has been used in the past for NASCAR programming.

While it may seem that 2014 is far away, in fact the negotiations for the new contract are far behind schedule. Since the incumbents get first shot, it is interesting to note that very little information exists about the future of TNT and ESPN in the sport. Turner just returned all the digital rights to NASCAR and effective January 1 will no longer operate the NASCAR.com website.

ESPN is loaded with college and NFL football content after September and has been struggling to give NASCAR a fair shake down the stretch. The final ten Sprint Cup Series Chase races are the prize to that network and that may be the only real item that is pursued.

Currently no comment from the FOX folks on the NASCAR or SPEED issue. Whatever happens, it is becoming clear that there will be substantive changes in the look of NASCAR TV after 2014.

We invite your opinion on this topic. Comments may be moderated prior to posting. Thank you for stopping by.
Posted by Daly Planet Editor at 5:30 AM 47 comments: