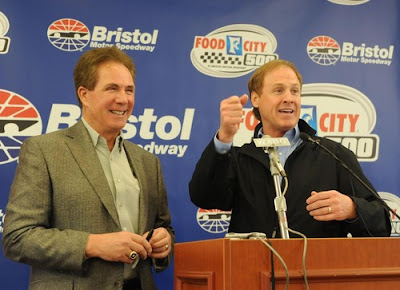 Last month NASCAR on FOX Lead Analyst Darrell Waltrip got on an airplane and flew to Bristol, TN with ESPN's Lead Infield Analyst Rusty Wallace. Waltrip later remarked that putting him on the same airplane with Wallace was like putting Jeff Burton in the same ambulance with Jeff Gordon last year in Texas.

These two very distinct personalities were in town to promote the fact that longtime Bristol race sponsor Food City was renaming the March Sprint Cup Series race the Jeff Byrd 500. In October of 2010, the former Bristol Motor Speedway General Manager lost his battle with cancer. It is a fitting tribute.

"In all my years of being around race tracks," said Waltrip. "I know of no one that was more loved and more respected than Jeff Byrd." The live press conference was streamed online as BMS continues to cement it's reputation as a group that understands the power of the Internet and the role of social media among race fans.

Waltrip will be in his normal role on Sunday for FOX. He will start in the infield on the pre-race show at 12:30PM ET and then move to the broadcast booth to call the race. Normally, he is then seen on-camera when the event is over offering his summary of the action. Clearly, Waltrip is the face of NASCAR on FOX.

This week Wallace will share that TV stage. Dale Jarrett has the weekend off, so Wallace will be in the ESPN TV booth alongside Marty Reid and Andy Petree in the Lead Analyst position for the Nationwide Series race. In support of his role, ESPN has worked hard to get Wallace as much exposure this week as possible.

On Monday, a feature story on Wallace appeared on scenedaily.com by reporter Erik Spanberg. Click here to read it. The story came on the heels of the news that Wallace had signed a contract extension with ESPN that would carry him through 2014. That is the final year of the current TV contract between ESPN and NASCAR. Clearly, Rusty was a top priority to ESPN.

Two of the quotes from the Spanberg story are very interesting in terms of NASCAR TV:

"Oh my God, I’ve learned so much in television, it’s unreal," said Wallace. "You can be the greatest driver in the world, but if you can’t explain it correctly, you’re no good."

"I really had a bad habit of trying to dominate the conversations (and) talk way too fast, that was a real big hit on me," Wallace explained. "I really had to go back and listen to some of my work. Unfortunately, I didn’t listen to it early enough. I think I could have been better quicker. Now when I listen to what I did back in ‘07 and ‘08 and I listen to what we’re doing now, I think it’s way different. I understand. The way you pause in between your sentences, the way you share the microphone. I’m constantly learning. I’m totally open to it."

There is perhaps no tougher stage for a NASCAR TV analyst than trying to tackle a live race at Bristol. Short laps, fast action and a hectic pace means that the play-by-play announcer and the pit reporters are moving a lot of information to the TV viewers. Trying to step-in with analysis without stepping on the call of the race is a delicate balance.

TDP readers may remember that in 2007 Wallace was the original analyst up in the TV booth and had Dr. Jerry Punch alongside calling the action. First Wallace and then Punch wound-up getting moved out of those high-profile positions. Wallace moved to the infield and made way for Dale Jarrett while Punch returned to pit road and Marty Reid took over the play-by-play role.

Since SPEED will be handling all the practice and qualifying coverage for the Nationwide Series at BMS, Wallace will not get any on-air practice before the race. There will simply be a one-hour pre-race show at 1PM ET and then the live race at 2PM on Saturday.

Just like Wallace, Waltrip's TV contract was recently extended until 2014 as well. FOX has been working hard on raising the visibility of Waltrip on sister network SPEED and continually puts him in high-profile roles on news programs and specials.

Waltrip has also been working the media hard, including a first-time appearance on the SpeedFreaks radio program. Click here to listen to the entire interview.

Some of Waltrip's TV and social media comments were interesting. Here are some excerpts:

"I've learned a lot in the last year and a half," said Waltrip. "I'm on Twitter. I'm on Facebook and I've just started recently on YouTube. I've learned so much from fans. In the TV booth, I keep my iPad on and follow Twitter during the race."

"We (FOX) are very unstructured and we never rehearse. We found out early on that rehearsing really screws us up. I watch the other group (ESPN) and they rehearse all the time. That's all they do. They rehearse three hours. I have enough knowledge and all of us (at FOX) have kind of been around enough that it's hard to stump us."

Waltrip's point is well-taken. Reid has been having trouble with his NASCAR knowledge and Jarrett's lack of emotion during a race continues to be puzzling. Only Petree has been the steady influence for ESPN since the network returned to the sport five seasons ago.

It should be very interesting to watch Wallace on Saturday and then Waltrip on Sunday. Two former drivers who were once bitter rivals working in the TV booth at the very track that helped propel them to stardom. Both men draw the same reactions from fans. There is no middle ground.

Love them or hate them, it will be Wallace and Waltrip as key players in NASCAR's return to national TV on this critical weekend of racing.