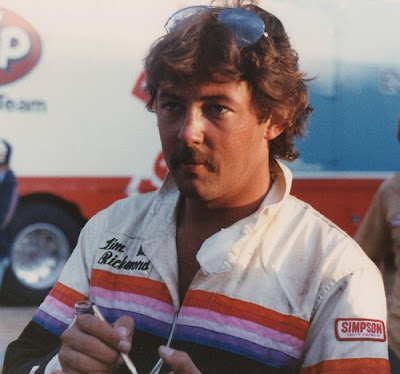 Update: Leaving this post as the top story so those looking for more info on Tim Richmond before the Tuesday night program can easily find it.

ESPN's 30 for 30 series on Tuesday nights has been a wonderful assortment of one-hour programs provided by a variety of sources. Show topics have been an eclectic group from Michael Jordan's baseball experience to the Baltimore Colts Marching Band losing their NFL team.

Into this highly acclaimed mix of documentaries steps producer Rory Karpf and the NASCAR Media Group. This time, there is no slickly packaged hype and not one mention of the Chase for the Championship. Instead, the sobering reality of the life and times of former driver Tim Richmond is placed front and center.

It's a bold topic to put in the mix of one of the highest-profile documentary series seen around the world. ESPN Films is the distributor. 30 for 30 was created in 2009 when ESPN signed Spike Lee and Barry Levinson among others to begin a sports-themed documentary project.

Some TV viewers may remember ESPN Original Entertainment and projects like Playmakers and The Junction Boys. There was also a Dale Earnhardt Sr. movie and shows like Stump the Schwab. That effort to create original programming and diversify the ESPN line-up ended in 2007 with a resounding thud.

This time around, ESPN Films is letting a wide variety of sports and non-sports production companies contribute. The results have been nothing short of spectacular.

Tim Richmond: To The Limit continues the 30 for 30 tradition of taking a single subject and examining it from all sides. Karpf and NMG never hide from the reality of Richmond's impact on the sport from both a positive and negative perspective.

As he has done before on other topics, Humpy Wheeler plays an integral role in setting the stage for how and why Richmond arrived behind the wheel of a stock car. Richmond's sister provides the family counterpoint to Wheeler's stories about the brash young man who looked just a bit different from the drivers of the time.

A reminder of Richmond's IndyCar past and footage of the accident that sent him to the safer confines of NASCAR serve to set an amazing table. Contributions from Deb Williams, Ed Hinton and Rick Hendrick help to put into perspective just how different Richmond was from the NASCAR stars like Richard Petty and Dale Earnhardt Sr.

Without a doubt, the key player in this project is Dr. Jerry Punch. Alone on a couch in casual clothes, Punch is free to speak about the swirl of controversy that surrounded Richmond for a variety of reasons. Only Punch could provide the ultimate credibility on both the NASCAR and healthcare issues.

AIDS was nothing more than a strange disease for gay men when Richmond was diagnosed. Fear, ignorance and homophobia fed the feelings that some in the NASCAR community had for Richmond once his health struggles were apparent.

A gripping soundbite from the late Bill France Jr. served to shine the light on the reasons for Richmond's final ban from competition. NMG's ability to use footage rarely seen or long since forgotten truly brings the reality of the this era to life.

Ultimately, it is Punch who ties the pieces together when he relates ESPN's on-air contribution to Richmond's final days. Punch is at his best when he is allowed to blend raw emotion with his personal love for the sport and its colorful characters.

It's been a while since NASCAR veered off the path of political correctness and opened the doors to the true reality of its history. The NASCAR Media Group is often tasked with churning-out the same old highlight shows. Well, not this time.

This project shows once again what can be done when creative people are turned loose on a sport rich with over half a century of history. It's well worth viewing a couple of times. Thanks to Andy Hall at ESPN for providing an advance copy.

Tim Richmond: To The Limit airs at 8PM ET on ESPN Tuesday night. It then re-airs on ESPN2 at 11PM and again on Wednesday at 7:30PM.

Always happy to have your comments. We will repost this after the original airing on Tuesday for additional opinions. In the meantime, please feel free to add your comment by clicking the comments button below. This is a family-friendly website, please keep that in mind when posting. Thanks for stopping by.
Posted by Daly Planet Editor at 8:00 PM 80 comments: