No Live TV For Hall Of Fame Induction 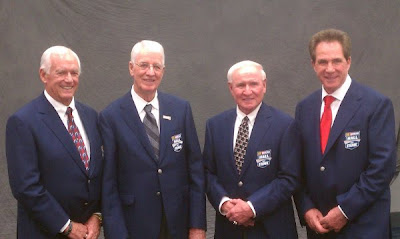 Friday night the five newest members of the NASCAR Hall of Fame were inducted in a ceremony in downtown Charlotte, NC. It was an important night for the sport in many ways.

On hand to document the events were the Motor Racing Network and the gang from SiriusXM NASCAR radio. The assembled media used social networking to pass along updates on what was said and post pictures as the evening went along.

NASCAR itself established a Twitter and Facebook presence to document every aspect of the induction ceremonies. A lot of good information was being sent to the fans in an almost real time stream.

Originally, there was no loud objection when it was announced that the television coverage of the induction was not going to be live. The reason given was that the event was not "Made for TV" and needed to be edited into a program that fit the commercial format and time restrictions that come with airing a program on SPEED.

As the Hall of Fame evening went along, a fan buzz began to build as more and more fans began passing along their objections to the fact that SPEED was selling used cars instead of honoring old DW and his friends. The Barrett-Jackson auto auction from Arizona was on the air and had been filling primetime on SPEED for days.

All of this was made even more ironic when NASCAR itself passed along a live online streaming video link. NASCAR invited fans to watch the remarks of the new inductees live as they spoke to the assembled media immediately after the ceremony.

In terms of scheduling, unofficial word passed along by fans was that SPEED had made the Barrett-Jackson auction deal before NASCAR changed the Hall of Fame induction date to late January. Basically, SPEED's position seems to be that its hands were tied and any scrutiny of the situation needs to be turned in NASCAR's direction.

That leads us to believe that perhaps the most logical option would have been to stream the live induction ceremonies online and then let SPEED air an edited version on Sunday. Hardcore fans would be able to see some significant history being made live and more casual fans would still be able to watch a finished TV program all about the event only days later.

Either way, it was a tough night in NASCAR land as information flowed from many sources about memorable moments, words and emotions that could not be seen by any fan. In this world of live coverage, instant news and portable video perhaps there needs to be a mandate in place that future Hall of Fame events be made available to the widest amount of fans live using whatever technology is needed to get the job done.

What is your opinion on this topic? To add your comment, just click the comments button below. Thank you as always for taking the time to stop by The Daly Planet.