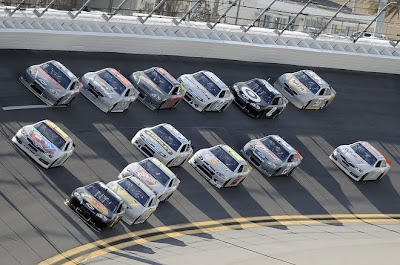 Here we go with the final day of Daytona testing for the Sprint Cup Series teams. This has been an interesting experience as a fan. The morning online sessions and the afternoon TV sessions have been two very different styles of programs.

John Roberts is hosting the coverage and channeling his inner-Musburger from the infield. No information on whether or not he is wearing his sneakers in full tribute.

Rick Allen and Jeff Hammond have been having a blast doing the morning online sessions. They have been working the social media angle hard as both are active Twitter users. Steve Byrnes, Darrell Waltrip and Larry McReynolds are calling the afternoon sessions.

The reporting from the track has been first class. Hermie Sadler has been outstanding and his absence from RaceDay will be missed this season. There has still been no information passed along to me about who will be replacing Sadler on that series.

Wendy Venturini, Bob Dillner and Randy Pemberton have been working the garage area from every angle and passing along a ton of information. The best thing about the SPEED reporters is that they are also active on social media and tweeting directly with fans as the sessions are in progress.

This has been the season of social media so far. Fans asking for interviews have seen the producer and reporters follow up quickly. SPEED has every member of the on-air team on Twitter as well as the show producer and other TV crew members.

It's been a kick to watch an interactive live NASCAR TV program in every sense of the word. SPEED and TNT were the first two NASCAR TV partners to understand the power of Twitter and Facebook in terms of opening up the "wall" between the sport and the fans.

While TNT has a very limited presence in the sport, SPEED is NASCAR's top TV partner due to the total amount of coverage throughout the year. It should be interesting to see how SPEED leverages this ability to communicate directly with fans during the season on other programming.

This post will serve to host your comments on the SPEED.com and SPEED coverage of the final day of Daytona testing. To add your opinion, just click on the comments button below. Thanks for stopping by!