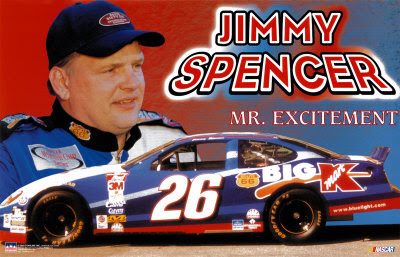 Jimmy Spencer could hardly contain himself. His grin spread from ear-to-ear in the fading Sonoma sunshine on SPEED's Victory Lane set. "What a great road racer he is..." said Spencer of his newest object of affection. This is clearly one of the strangest alliances in the history of NASCAR...Jimmy Spencer and Juan Pablo Montoya.

When I first saw Jimmy Spencer, he was in a fight at the old Riverside Speedway in Agawam, Massachusetts. It was after a race, and all hell was breaking loose. Needless to say, Spencer was right in the middle of it. His legendary tag as "Mr. Excitement" grew from his rough-and-tumble racing style in the Modified ranks throughout New England. He won more races then he made friends.

A second generation racer, Spencer is from the blue-collar town of Berwick, PA. Maybe best known for its Wise Potato Chips, this town of several thousand is about thirty minutes away from Wilkes-Barre. Spencer had a mixed career in NASCAR, and his two Winston Cup wins came while driving for Junior Johnson. He may be best remembered by fans for his off-track thumping of Kurt Busch, which ultimately led to his retirement.

Spencer is a constant on the Victory Lane program. Alongside host John Roberts, Spencer and sidekick Kenny Wallace tape a one hour show "as it happens" from the Victory Lane area at the NEXTEL Cup tracks. It has proven to be a hit with SPEED viewers, and this weekend it would be a saving grace for the TNT television network.

As everyone knows, TNT had a myriad of troubles and wound-up getting egg on their face because they lost control of the live television broadcast. No racing was shown late, Kyle Petty was put in a bad spot, Bill Weber got mad again, and they never even showed the finishing order of the race before they left the air.

It was up to Jimmy Spencer and the Victory Lane crew to sort this TNT mess out. Spencer fired the first volley at TNT by saying right away he watched the race on DirecTV's Hot Pass, and enjoyed it. Spencer listened to the radio chatter, and commended crew chief Donnie Wingo for leaving Montoya alone to drive.

Then, Spencer compared Montoya to Tiger Woods and Joe Montana in the same breath. In terms of great athletes, Spencer said Montoya is "one of those guys." The Victory Lane crew was clearly pumped about the upcoming opportunity to speak with Montoya.

Little did they know that most of North America had absolutely no clue to the circumstances surrounding this victory. TNT's Bill Weber had said over-and-over again Montoya would run out of gas, and Harvick was the only car that could make it.

Spencer and Wallace did a good job, in their own special way, of explaining the fuel mileage situations, and what cars ran out. Wallace alluded to a Formula-1 race, and the fuel games that are common in that series. Spencer actually "tipped his hat" to NASCAR for not throwing a "questionable debris" caution, and letting the race play out to the end. All great points from the panel.

"There is nobody that could have won that race today in that car except Juan Pablo" said Spencer. Old time NASCAR fans may have had to be helped up off the floor after that little bombshell. "Mr. Excitement" was publicly singing the praises of a rookie driver from Bogota. Not Bogota, New Jersey mind you, but the infamous Bogota, Colombia. My-oh-my how both NASCAR and Jimmy Spencer have changed.

Montoya looked like a million bucks when he was seated on the SPEED Channel set. Spencer loved talking with him racer-to-racer, and the responses to Spencer's questions were fascinating. Montoya said he wanted to race hard, pass people, and be aggressive. That's why he picked NASCAR. At Sonoma, he played the fuel card by shifting early and coasting through part of the course.

Spencer plied from Montoya that only a consistent race could have turned out with a win, because his car was poor on new tires. Montoya's entire interview was classy and clean, he looked fresher than both Wallace and Spencer, and they had only been watching the race.

Victory Lane did a good job of showing race highlights, the final race rundown, and explaining the circumstances that led to the finishing positions. This week, this program was crucial to viewers left hanging by the TNT troubles. Kudos to the SPEED crew for taking their time to pass along all the information they had about the race.

Chip Ganassi joined Victory Lane as the winning owner, and this interview provided some of the newest entries into the "Jimmy Spencer on TV" Hall of Fame. Spencer told Ganassi that he likes "a guy that's got spunk" like Montoya. Spencer then went on to deliver the classic line of the telecast. In summing up his feelings for Montoya, Spencer simply said..."he's got feist."

The Daly Planet welcomes comments from readers. Simply click on the COMMENTS button below, or email editor@thedalyplanet.tv if you wish not to be published. All email is held in confidence. Thanks again for taking the time to stop by.
Posted by Daly Planet Editor at 8:53 PM 7 comments: