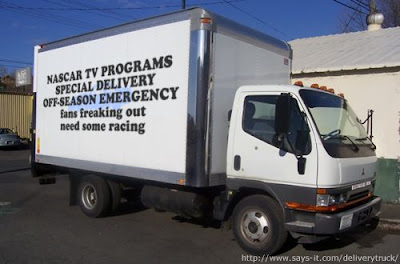 Like most major professional sports, NASCAR has an organization that catalogues all the race footage from the season. The NASCAR Media Group has lots of Emmy Awards and lots of toys to play with where TV is concerned.

This is the time of the year when the post-season TV landscape gets the once-over from TDP. Right now, the results look pretty bleak. There will be the mandatory season-in-review shows aired for each series in November. Last year these shows were buried in bad timeslots and never really got any attention. Then, once the three NASCAR banquets finish, things slow down to a crawl.

In terms of using TV series like NASCAR Confidential or Dale Junior's Shifting Gears to handle some post-season content, the answer is no. Best of RaceDay? No. Best of TWIN? No. Best of Krista Voda's hats? That one is in development and looking for a sponsor.

It appears that there is no post-season NASCAR anything scheduled on the ESPN networks right now. After a while, the racing footage reverts back to the NASCAR Media Group. It really comes down to this group and the NASCAR TV partners planning in advance for some off-season specials. Those could range from Humpy Wheeler interviews to edited race highlights with new reactions from the participants.

SPEED stepped-up to the plate and produced some testing coverage in January, but that is not the same as long-form edited or live programming that covers the sport in the way it used to be covered.

Apparently, there will be no end-of-season roundtables with NASCAR journalists, no final all-NASCAR Wind Tunnel special and no final grouping of the TV personalities who worked all season long to bring the fans NASCAR coverage.

This is where NASCAR really misses a TV network that they can control. The current NASCAR TV partners have different agendas that include multi-network sports distribution, lifestyle programming and even primetime TV dramas. Did you know that Kyra Sedgwick was The Closer? To these networks, NASCAR is just another programming series that comes and goes.

Meanwhile, the NFL network has a full slate of programming all summer long. The Golf Channel has a blast during the off-season and the Tennis Channel takes the time to review the year for several professional series. Now, both the NHL and Major League Baseball are about to join that list with top-flight television professionals in charge of HD Networks that are going to be exciting to watch.

NASCAR is over fifty years old. Its rich history sits in one geographic area of the country as does almost all the high-tech racing shops and equipment suppliers. The stories of the Lee Petty generation may be gone, but men like Harry Gant, Cale Yarborough and David Pearson are alive and well. They are just waiting to tell a new generation of fans about how it used to be when full-size cars without power steering were wrestled around legendary tracks by real men.

This is the second season of the new NASCAR TV contract and the second time for the fans to hear the off-season excuses of all four NASCAR TV partners. No room on ESPN or ABC, Fox is busy with the NFL and TNT just does not care.

SPEED is left holding the bag, as usual. That network only ordered six NASCAR Confidential episodes, never got the Humpy Show off the ground and has a major swing to lifestyle programming as its top agenda.

So, enjoy the next several weeks as The Chase nears the finish. TDP will keep updating the TV schedule for the three banquets and the year-in-review shows. It appears that once again this season when the checkered flag waves at Homestead, it also waves on almost all NASCAR TV programming until 2009.

The Daly Planet welcomes comments from readers. To add your opinion, just click on the COMMENTS button below and follow the easy instructions. The rules for posting are located on the right side of the main page. Thank you for taking the time to stop by.
Posted by Daly Planet Editor at 2:43 PM 52 comments: