Waltrip Back On TV Friday From MIS 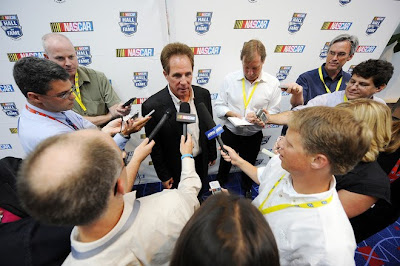 It's been a heck of a week for FOX and SPEED's Darrell Waltrip. At 11:30AM on Friday, SPEED announcer Rick Allen may well be the first to welcome now NASCAR Hall of Famer Waltrip back to the broadcast booth.

Waltrip begins his weekend of TV work with Nationwide Series practice at 11:30AM ET. Larry McReynolds will join Allen and Waltrip in the booth for that session.

SPEED actually kicks-off the day at 11AM with NASCAR Live. John Roberts and Jeff Hammond will set the scene at the track. Hermie Sadler and Randy Pemberton are the reporters. The full TV schedule for Friday is on the left side of this page.

Waltrip is now done with his FOX duties. The only reason he is still on TV is because he is filling in at SPEED for Kyle Petty during the six TNT races. This weekend finds Waltrip in the TV booth, on the Trackside panel and finally alongside of Kenny Wallace and Roberts on RaceDay.

Earlier this year we talked about the desire of senior FOX Sports executive David Hill to raise Waltrip's TV profile throughout the entire NASCAR season. In the past, Waltrip departed after the final FOX race. Elliott Sadler used to replace him on Trackside for the rest of the year. SPEED has no official update on what will happen with Trackside talent after the TNT races are over.

Waltrip has talked about wanting to be more involved in NASCAR TV coverage when the FOX races were done. He began appearing all over the SPEED coverage of the final weekend of racing in Homestead, FL. Things grew from there.

Now, he is with TV viewers all summer and by being around for Trackside and RaceDay he is also available to get into the TV booth for some practice and qualifying coverage. There seems to be a little trend developing here.

It should be interesting to see how Waltrip handles his new Hall of Fame status on the air. There is little doubt it will be a topic mentioned many times throughout the weekend. Life has truly changed for Waltrip and just like being a Daytona 500 winner or a Sprint Cup Series champ, things will never be the same again.

The twist in Friday NASCAR TV is the fact that SPEED is sneaking in live the ARCA race from MIS at 5PM ET. Rick Allen and Phil Parsons do a good job on this coverage.

This post will serve to host your comments about the Friday TV coverage from MIS by SPEED. To add your opinion, just click on the comments button below. Thank you for taking the time to stop by The Daly Planet.