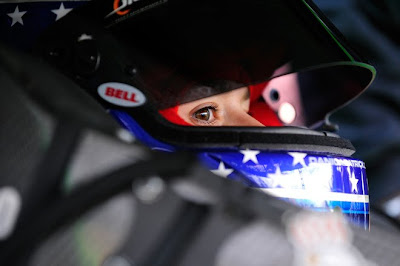 The situation could not be worse for ESPN in Phoenix. Sunshine today has made the newly-paved single groove Phoenix International Raceway into an ice rink.

The start of the race and double-file restarts are going to be almost impossible. No drivers were able to run two-wide in any of the practice sessions. Despite being on the track alone, Nationwide qualifying was determined by who stayed on the rubber in the groove and who went high.

Nicole Briscoe opens things up at 3PM with NASCAR Countdown. Rusty Wallace and Brad Daugherty are alongside Briscoe in the Infield Pit Studio. The track is the big issue but other stories include the championship, Danica Patrick racing today and no Kyle Busch in the field.

Marty Reid is limping his way though this season of disappointment. He was removed from the Sprint Cup Series telecasts and replace by the infield host just days before the ESPN coverage began. He has two Nationwide Series telecasts remaining and his assignment for next season has not yet been revealed. He should have his hands full today.

Dale Jarrett and Andy Petree are the color commentators. They are focused on the Sprint Cup Series, but ESPN refuses to bring in two other announcers for these final races. Petree continues his solid performance, while Jarrett waffles between outspoken and politically correct. It's been an interesting season for these two.

Jamie Little, Dr. Jerry Punch, Vince Welch and Dave Burns are on pit road. Tim Brewer is in the Tech Garage. Expect Brewer to be on the spot for the track conditions and tire issues. The pit reporters may be very busy if this race becomes a crash-fest.

ESPN is going to have a tough time staying "hyper-tight" with the track problems. Anytime two cars are double-wide the cameras need to move in that direction. There is simply no way they will make it through the corner. In qualifying, we saw that sometimes one car could not navigate the turns at speed.

PIR is one of the tracks where a red flag is thrown quickly. The track has speed, but there are many locations were a two or three car incident will immediately block the track. NASCAR race control's radio will be live on NASCAR.com today. Look for the Nationwide Series scanner link. You have to sign-in, but it's totally free.

This post will host your comments on the ESPN2 coverage of the Nationwide Series telecast from PIR today. To add your TV-related opinion, just click on the comments button below. Thank you for taking the time to stop by.