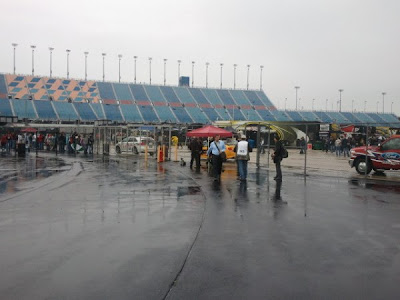 The switch in race dates for Chicagoland Speedway chased away the hot temps, but brought the cold and rain of mid-September. It has been raining at the track since the early morning and right now all activity is on hold.

If weather permits, NASCAR goes through the motions of the opening ceremonies without pushing the cars out of the garage and onto the grid. Once the flyover is done, NASCAR officially puts the race on hold if the track is still wet.

The big Chicagoland Speedway takes 90 minutes to dry if the sun is out and around 2 hours if the weather continues to be overcast and cold. Right now, reporters from the track are saying it will be a long weather hold.

ESPN has Nicole Briscoe anchoring from the Infield Pit Studio. The network pretty much used most of the edited features during the last rain delay in Atlanta. Briscoe has Rusty Wallace and Brad Daugherty alongside. It will be interesting to see if Wallace addresses the rumor that his current 5 Hour Energy sponsor is leaving for the Cup Series with Clint Bowyer and MWR.

Allen Bestwick is always optimistic and he has Dale Jarrett and Andy Petree alongside in the TV booth. During Saturday's Nationwide Series race, neither Petree or Jarrett lifted a finger to help announcer Marty Reid. Jarrett was dry as toast and Petree spoke in general terms, clearly focused on the Cup race.

It should be interesting to see if Jarrett and Petree rise to the occasion of this first Chase race and help Bestwick make it a memorable telecast. This is the first time for Bestwick in this position and it is very clear he wants to make his mark.

ESPN is clear on the schedule today until 8PM, when live Major League Baseball is scheduled. The NASCAR TV contract requires live TV coverage from the green to checkered flag, but not during rain delays. ESPN could be free to leave and then return if the action is delayed until the track lights go on.

We will continue to update the weather delays on this post and in the comments section. We invite your opinions on the TV coverage today, just click the comments button below. Thanks for taking the time to stop by.