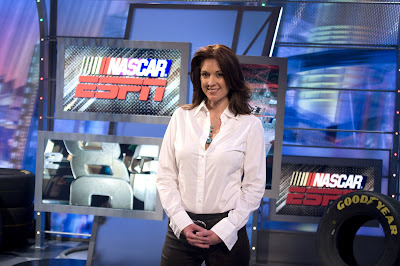 The starts of The Chase were right down the road from ESPN in New York City for NASCAR's media tour. Host Nicole Manske brought the first guest onto NASCAR Now for Wednesday and surprisingly it was Jeff Gordon.

Almost the forgotten man in The Chase, Gordon was polite but seemed to have a tough time with Manske's questions. She focused on the negative, but finally let him have a moment in the sun before moving him off for the next interview. Gordon was certainly an interesting first selection for The Chase media tour show.

It was Mike Massaro on-site in New York who interviewed Kyle Busch. Massaro tried, but Busch was not going to be rattled or give anything away. He appeared relaxed and never gave a hint that his incident with Dale Earnhardt Jr. was on his mind. With Toyota and Joe Gibbs Racing behind him, it was clear Busch was confident.

Various "soundbites" from drivers like Tony Stewart and Dale Earnhardt Jr. were their only participation in the show. Jeff Burton seemed thoughtful, but he was speaking to a group of reporters and what question he had been asked was not very clear. Manske also talked to Matt Kenseth, again an interesting choice. Kenseth was quiet and polite and said all the right things.

Massaro never appeared on the show live, instead it was Brad Daugherty who was clearly not in New York. Daugherty tried to put into perspective the mindset of the other teams still in the Cup Series but outside of The Chase. His focus was on staying or trying to get into the Top 35. "They will be racing their guts out," said Daugherty. He says that a lot.

Manske never played Letterman's Top Ten list read by the drivers. She never replayed any portions of the morning show appearances or let TV viewers see what went on behind the scenes. NASCAR Now was just in the media line like everyone else.

On Tuesday's show, Manske re-aired a long feature from the E:60 news magazine on Joey Logano. Later, she re-aired parts of a segment from the Monday version of NASCAR Now. It seems as if the program is suddenly having a tough time with content.

This season, NASCAR Now has been nothing short of fantastic. Every show has minor issues that need attention, but this TV series has been the one fans turn to for information on a regular basis.

Hopefully, now with the current on-air team heading into The Chase for the first time, the show will continue to work hard to go get the real news stories that live behind the PR fluff and the promotions. Manske will be back on Thursday at 5PM with another edition of NASCAR Now on ESPN2.

The Daly Planet welcomes comments from readers. Simply click on the COMMENTS button below and follow the easy instructions. The rules for posting are located on the right side of the main page. Thanks for taking the time to stop by.
Posted by Daly Planet Editor at 5:07 PM 10 comments: 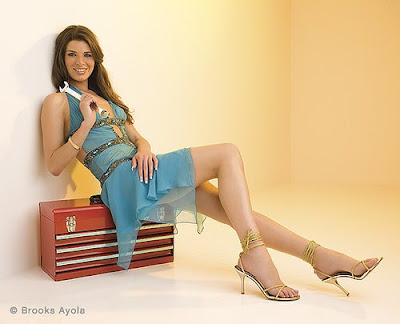 On the heels of Wrecked, the exciting saga of people towing things, SPEED has announced that the network has added another new and original TV series.

This one comes from the producers of Livin' the Low Life with Vida Guerra and Payback, two series destined to live on YouTube for a very long time.

The show is described by SPEED as "a never-ending party...built around the eclectic car customization craze and wrapped in an ear-thumping, designer-driven atmosphere."

The new series will be called Hot Import Nights and will debut in early November. The host will be fashion model and part-time actress Adrienne Janic, who is pictured above. SPEED viewers may remember her from the current SPEED series called Overhaulin'.

This program continues to expand the bi-polar nature of SPEED. It adds to the Monday through Thursday content of the network which now regularly features absolutely no sanctioned motorsports of any kind.

From February through November, SPEED changes into a motorsports channel each Friday through Sunday. While NASCAR dominates, SPEED continues to offer selected motorcycle and motorsports programming as well on those days.

Steve Craddock is the VP of Programming at SPEED and he had this to say about the new series and his pledge to expand the lifestyle programming category. "Hot Import Nights continues to honor that pledge with a nod to the youth movement and tuner culture that continues to gather strength across the country," he said.

Motorsports fans have been wondering if SPEED will expand this lifestyle "pledge" to programming that deals with actual racing. The Humpy Show was a one-time pilot that featured legendary track promoter Humpy Wheeler. Despite the positive fan reaction, there have been no other episodes produced.

Beyond the Wheel was an Emmy Award winning program that took viewers behind the scenes of NASCAR's Sprint Cup Series events. It was abruptly cancelled by SPEED several years ago without explanation.

NASCAR Confidential is a new series for 2008 that takes a look at various aspects of NASCAR from the viewpoint of those involved. From track photographers to an unprecedented look inside Race Control, this series has been a big hit with NASCAR fans.

There are thirty-eight weekends of Sprint Cup Series racing in 2008. Where NASCAR Confidential is concerned, SPEED ordered six episodes.

Veteran fans may have also noticed that The Chase Is On with Steve Byrnes and Carl Edwards is not on the SPEED TV schedule for this season. With no daily NASCAR TV program on SPEED or FoxSportsNet, this Thursday night show served to set-up each race in The Chase as the season headed for Homestead.

Next week, with the first race in The Chase done and the single digit countdown underway, SPEED will have one hour of This Week in NASCAR on Monday night and a replay of the Loudon race at Noon on Thursday. That is the weekday presence of NASCAR on SPEED at the height of the season.

Meanwhile, during the same time period of Monday night through Friday morning, a PINKS episode will air fifteen times and twelve episodes of Wrecked will be on-the-air. What's wrong with this picture?

The Daly Planet welcomes comments from readers. Simply click on the COMMENTS button below and follow the easy instructions. The rules for posting are located on the right side of the main page. Thanks for taking the time to stop by.
Posted by Daly Planet Editor at 10:09 AM 27 comments: