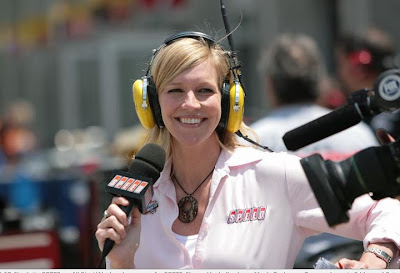 It's a tough time of the day with most of America at work. It's not available online from NASCAR or SPEED as a video stream. The rules are confusing and it's basically the NASCAR on FOX production team appearing on SPEED. Welcome to the Duels.

The twin qualifying races for the Daytona 500 are on SPEED. Krista Voda moves into the Hollywood Hotel in place of Chris Myers, as she has for several years. Myers is a FOX guy, not a SPEED guy. Other than that, it's Mike, DW, Larry and the FOX gang on TV.

RaceDay kicks off the coverage at 1PM with an hour special. John Roberts, Kyle Petty and Kenny Wallace will be on the SPEED Stage with Hermie Sadler and Wendy Venturini reporting. RaceDay is supposed to have a new look this season, we will see.

FOX had a rough season last year and these races should be a sneak peek of what the Daytona 500 coverage will have in store. New in-car driver angles, more technology and additional team scanner traffic are what FOX said they would be delivering this season. Be interesting to see if they keep if for the 500 or use that approach here.

An edition of Victory Lane follows the second race on SPEED and is scheduled for 5:30PM ET. Roberts, Petty and Wallace are on the show.

This post will serve to host your comments on the SPEED coverage of the Gatorade Duels. To add your TV-related comments, just click on the comments button below. This is a family-friendly website, please keep that in mind when posting. Thanks for stopping by. This is year five of TDP. 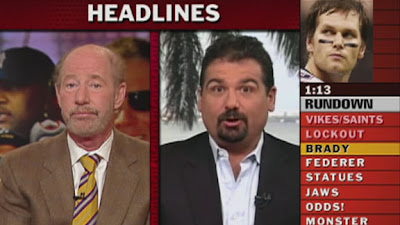 Update: This story was splashed all over the media on Wednesday morning. ESPN NASCAR announcers and executives were asked about it during their Daytona preseason press conference. PTI added Jimmie Johnson as a Wednesday guest and he asked Tony Kornheiser to attend a race as his guest so Kornheiser could begin to make "educated comments" about the sport.

The female reporter named by Kornheiser, Liz Clarke of the Washington Post, appeared on Sirius NASCAR channel 128 to clarify her comments. ESPN's top motorsports executive said Kornheiser's comments do not reflect the views of NASCAR by ESPN.

Add to that Dale Earnhardt Jr. who had a practice crash and will start at the rear of the field for the Daytona 500 after switching to a back-up car. So much for leading the field to green on national TV. This story will stay up until the live blog of the Duels Thursday afternoon.

There are two schools of thought at ESPN where NASCAR is concerned. One group of employees enjoys the sport as part of the motorsports landscape, while another group is firmly convinced that NASCAR is completely fixed from top to bottom. It was this way when I worked at ESPN back in the 1980's and it is that way now.

Stick and ball sports are played out in the open. You make the catch against the wall for the final out. You intercept the ball and run for a touchdown. You shoot the puck into the net, putt the golf ball into the hole and it all seems so simple.

The dark voodoo of NASCAR perplexes those not exposed to motorsports as just another form of real sport. The reason ESPN has Tim Brewer on telecasts telling us wheels are round and fuel makes cars go is because the network believes that viewers need that basic level of assistance. In other words, people who watch this stuff are idiots.

Over the past four seasons, there have been many hilarious moments when the need to discuss NASCAR-related content fell to ESPN on-air employees with no clue. SportsCenter announcers rush through brief highlights so they can return to real sports. ESPNEWS anchors have that deer in the headlights look when a NASCAR interview surfaces. Names are mangled, details are wrong and the sport suffers.

The most bizarre graveyard for NASCAR on ESPN has been the weekday show called Pardon the Interruption. Originating from Washington DC, the show features two hosts discussing sports stories of the day with a time limit on each discussion.

Tuesday, fulltime host Tony Kornheiser was paired with Dan LeBatard, a substitute host and writer for the Miami Herald newspaper. In the picture above Kornheiser is on the left and LeBatard on the right. The fourth topic on the show rundown was Dale Earnhardt Jr. and his Daytona 500 pole run.

Here is the conversation on the program that ran on ESPN, ESPN2 and ESPNEWS only days before ESPN will start NASCAR racing coverage and FOX will telecast the Daytona 500:

LeBatard: Since we are already questioning college football's integrity, why don't you start investigating NASCAR's too, Mr. Restrictor Plate.

This is the 10th anniversary of Dale Earnhardt's death, (TV) ratings are down since. Two hundred thousand fans will hold up three fingers in his honor at the Daytona 500 on Sunday. It just so happens that his son, Dale Earnhart Jr., has the pole position for that race. You believe the fix is in, don't you?

Kornheiser: Well, it's a great America moment isn't it when Dale Earnhardt Jr. at Daytona can have the pole position...a guy who has not won a race in his last 93 starts.

There are people in and around the NASCAR world, not just drivers but people who cover the sport as well, who are winking at this one. Who are wondering if this wasn't a set-up because it's the pole position, it's not winning the race.

It's just getting on the pole, having the lead and bringing the viewers in. Dale Earnhardt Jr. is the most popular driver for the last seven or eight years and he can't win a race. This is a good set-up moment, is it not?

LeBatard: But is it a great American moment or is it professional wrestling? If you're going to lob this accusation out there...and look, I've heard the comments where people say you let something go on the car and give a guy a certain advantage. I can't deny that Junior winning would be good for NASCAR.

Kornheiser: Everytime he runs if he wins it's good for NASCAR because he is the most popular guy out there and they want to get the ratings back up. I think the suggestion here, someone I talked to who covered auto racing for a lot of years, said she believed there was a 60% chance that Junior qualified with a car not quite up to code and people looked the other way.

There are no points involved, the other drivers don't get hurt and running three good laps is not the same as running 500 miles. Everybody in NASCAR is going to feel good about this.

Needless to say, even though Kornheiser's comments lasted less than two minutes, the damage done was pretty thorough. What Kornheiser did was dredge up an issue that has plagued the sport for years. That is integrity.

Last season, Denny Hamlin was fined fifty thousand dollars for commenting on a late caution flag in one race. All Hamlin did was say he expected it and it did not bother him. The hint that NASCAR put out a caution to close up the field for a better finish lightened his wallet.

Kornheiser chose to ignore almost all the reality surrounding Junior's qualifying run in order to make his point. He chose to not reach out to NASCAR for a comment or help with an understanding of the situation. More than that, he did not take a moment to speak with Rusty Wallace, Dale Jarrett or Andy Petree.

The allegation that the NFL fixed a coin toss to give the home team a favorable starting position would cause outrage. The suggestion that Major League Baseball allowed a corked bat for a slumping hitter to get better results would get a phone call from the league.

What NASCAR chooses to do with this should be interesting, especially because ESPN has a scheduled preseason press conference with all the NASCAR reporters in the Daytona Infield Media Center at 11:30AM on Wednesday.

It will be VP of Motorsports Rich Feinberg along with Marty Reid, Dale Jarrett and Andy Petree talking about the network's approach to NASCAR this season. Perhaps the two analysts will be asked about one of ESPN's top rated programs alleging that Junior was placed on the pole to help with slumping TV ratings.

It is ESPN that televises the final seventeen Sprint Cup Series races, including the entire Chase for the Championship. Any negative fan reaction during the off-season is a direct result of ESPN's efforts down the stretch.

Kornheiser was once suspended for remarking on the retro 80's fashion sense of a certain female ESPN anchor. In this case, he simply alleges that one of the top professional sports in North America orchestrated the pole position for the biggest Sprint Cup Series race of the season.

We welcome your comments on this topic and will update this post after the morning press conference. To add your opinion, just click on the comments button below. This is a family-friendly website, please keep that in mind when posting. Thanks for taking the time to stop by.