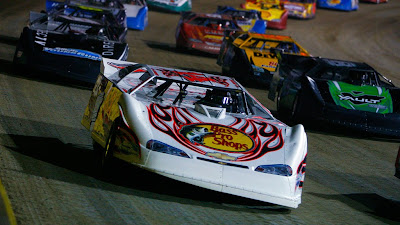 It's that time of the year again to dig out a little money for a good cause and get some racing in return. Wednesday night is the seventh year for the Prelude to the Dream charity race from Tony Stewart's Eldora Speedway in Rossburg, Ohio.

Eldora is a little half-mile track that lets NASCAR fans take a look at some of their favorite drivers interacting in a very different way and driving Late Model Stock Cars on dirt. Pretty much, it's a blast.

There are four charities that benefit from the dollars raised by the PPV telecast:

The format is pretty simple. The guys get hot laps, qualify and then run in heats that lead to a main. The track is tipped 24 degrees in the corner and 8 on the straights. The reason this is called the Prelude is because there is another feature race called The Dream that runs at Eldora later in the season.

Basically, first up is a preview show on your cable or satellite PPV channels that lets you locate the right channel and then use your remote or telephone to order. The DirecTV channel is 121 and DISH is 455. The preview should be running at 7:30PM ET. The charity event is $24.95 and gives you a show from 8PM through midnight Eastern or the conclusion of the feature race. It also re-airs for those authorized.

The TV folks donate their time for this one. It's ESPN's Marty Reid in the booth with Darrell Waltrip and Larry McReynolds from FOX. Matt Yocum hosts the event while Dick Berggren and Junior's crew chief Steve Letarte are the pit reporters. Veteran Pam Miller who is currently the Pit Producer for NASCAR on FOX will produce the telecast.

This is a fast track. Stewart holds the qualifying record at 116.8mph. The speedway seats about 23 thousand and it is always packed for this night. It's just a nice glimpse into the reality of short-track racing. DW has driven the water truck before, Tony runs around checking the track as the owner and the fans do the wave.

Click here for the official Prelude to the Dream website. There is a little more info and some videos that offer a look at the participants.

Happy to have your comments on this topic as well as reaction to the telecast. To add your opinion, just click on the comments button below. This is a family-friendly website, please keep that in mind when posting. Thanks for stopping by.