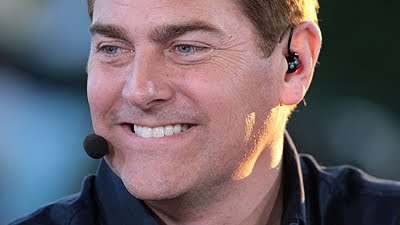 John Roberts is back in the TV booth this weekend for SPEED but Darrell Waltrip is not. Waltrip is getting ready for next Wednesday, when the network will cover the selection of the new nominees for the NASCAR Hall of Fame.

Roberts will be joined by Jeff Hammond and Larry McReynolds in the booth at the Auto Club Speedway. This crew starts with Nationwide Series practice at 2PM ET. They take a break for ESPN2 coverage, then resume with the second round of practice at 4:30PM.

Throughout the day Wendy Venturini, Bob Dillner, Randy Pemberton and Hermie Sadler will rotate on the different SPEED shows as reporters.

ESPN has Dr. Jerry Punch, Dave Burns, Jamie Little and Vince Welch as reporters this weekend. Tim Brewer is also in the Tech Garage. Allen Bestwick will be working from the Infield Pit Studio with Rusty Wallace and Brad Daugherty.

The day ends with Trackside on SPEED going up against NASCAR Now on ESPN2 at 8:30PM. Krista Voda hosts on SPEED with guests Jeff Gordon and Ryan Newman. Nicole Briscoe is in the ESPN2 studios hosting with analyst Ricky Craven.

This post will serve to host your comments on the Friday TV coverage from these two networks as the day goes by. To add your TV-related opinion, just click on the comments button below. This is a family-friendly website, please keep that in mind when posting. Thanks for taking the time to stop by The Daly Planet.
Posted by Daly Planet Editor at 5:00 AM 15 comments: