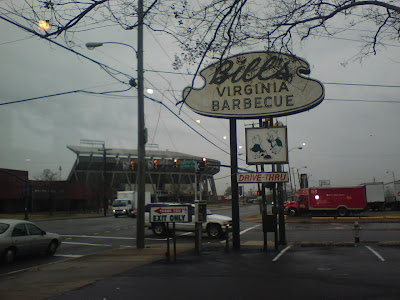 During my college days at VCU, a Sunday doubleheader normally involved some barbecue from Bill's and a walk over to The Diamond to see the Richmond Braves. After the weather from Tropical Storm Hanna, a Richmond doubleheader has taken on a whole new meaning. Although, there will probably still be some barbecue involved.

This weekend in Richmond was supposed to signal the transition from ESPN to ABC of the Sprint Cup Series. Trading in the world of cable TV, NASCAR was going to get a chance to hold one of the most anticipated races of the season in prime-time on Saturday night. It never happened.

Now, after a cluster of what seems to be bad decisions by the sanctioning body, both the Nationwide and Sprint Cup Series races have been shuffled to Sunday. Clearly, the focus of the weekend was the Sprint Cup Series race. The final regular season event before The Chase begins, this racet was being discussed all over the Internet, TV and radio. Now, it is about to take-on the NFL head-to-head.

At 9PM on Saturday night, the ESPN.com TV schedule listed none of the NASCAR TV changes for the weekend. No one had moved the Sprint Cup race, the Nationwide event, or any of the support programming. Any fan who went to ESPN.com for TV information and checked the listings was disappointed.

Over the last two years, ESPN has made a decision not to mention the Jayski.com website on-the-air. There is plenty of time to promote this ESPN-owned business on NASCAR Now, NASCAR Countdown and the races. Ironically, fans who want to know what is really going-on with NASCAR head to Jayski for the most up-to-date information. The situation with Richmond was no different.

One big winner of the weekend shuffle was SPEED. That network handled the Craftsman Truck Series race from Gateway live on Saturday and showed most of its taped SPEED Stage programs as well. The big bonus was the fact that NASCAR Raceday was going to take center-stage on Sunday afternoon.

Normally ending one hour before ESPN takes the air for the NASCAR Countdown show, this time RaceDay gets to air from 11AM to 1PM. ESPN could not find a TV network for NASCAR Countdown, so RaceDay has no competition. In essence, RaceDay on SPEED becomes NASCAR Countdown and leads directly into the ESPN race.

ESPN has NFL Countdown from 11AM to 1PM Sunday and over on ESPN2 there is the live finale for the Indy Lights Series at 12:30PM. Unless the company chose to use ESPNEWS or ESPN Classic Network for the NASCAR Countdown show, there was basically nowhere to put it.

At 1PM, ESPN will carry the Sprint Cup Series race and then at 6:30PM it will be ESPN2 hosting NASCAR Countdown and the Nationwide event.

Currently, there is no NASCAR Now listed for 10AM Sunday morning. But, there will be a wrap-up version of that show immediately after the conclusion of the Nationwide race.

As many of you know, NASCAR and RIR are planning to empty the entire racetrack of fans after the Sprint Cup Series race. Then, they are going to open the gates for the Nationwide Series event scheduled for 7PM. This process may be just as interesting as the racing action.

If all goes well, there should be a two hour window to make this transition. The key words there are "if all goes well." Should rain, numerous caution flags or several red flag periods push this race back it could end much later than the anticipated 4:30PM. This element should be interesting to keep in mind as the race unfolds.

ESPN has one announcing team that serves both the Nationwide and Sprint Cup Series. That means that Dr. Jerry Punch, Dale Jarrett and Andy Petree will basically be calling back-to-back races on Sunday. With the announcers usually in position about two hours before the race start, this should make for a ten-to-twelve hour day on-the-air for the booth announcers.

Playing a critical role in giving that group a break will be Allen Bestwick and his team of Rusty Wallace and Brad Daugherty in the Infield Pit Studio. Bestwick can carry the commentary anytime and is usually used coming out of commercial break to give the guys in the booth a breather. Look for that more frequently than normal on Sunday evening.

Unfortunately, while the live Nationwide Series race is running on ESPN2, SPEED will be showing their popular Sunday night line-up that includes The SPEED Report at 7PM and Wind Tunnel at 9PM. The latest information is that SPEED will delay Victory Lane until 10PM, but we will work to verify that on Sunday and update this page.

That is going to split the audience a bit, but hopefully technology will help most race fans record one while they watch the other. Speaking of technology, NASCAR.com is offering Sprint RaceView free for the Richmond race. This is an Internet broadband computer application that lets users control three cameras, listen to driver and team scanners and lot of other fun things. Just click here to be taken directly to the free RaceView page.

TDP will have a new post up for the Sprint Cup Series race at Noon Eastern and will update any additional information on this page until that time. Please feel free to add your TV or racing-related opinion on the Richmond weekend rain out to this post.

Just click the COMMENTS button below and follow the easy instructions. The rules for posting are located on the right side of the main page. Thanks again for dropping by.
Posted by Daly Planet Editor at 9:20 PM 25 comments: 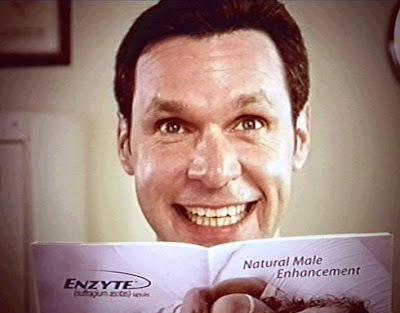 Few topics have generated as much email as the interesting ads featuring "Smiling Bob" and his permanently smiling wife.

Many NASCAR fans felt that Bob and his rather thinly disguised pitch for an "performance enhancer" called Enzyte should not have been seen in NASCAR TV programs oriented toward the family.

While medical drugs like Viagra and Levitra focus their advertising on tasteful and sometimes humorous approaches to promoting their product, Enzyte was different.

The advertising never crossed any line that involved nudity or profanity, but the entire character of "Smiling Bob" was beyond tasteless for many. The themed commercials pitched Bob as a dolt who simply made his way through life blissfully unaware that his wife liked to tell her friends all about Bob's "new found confidence."

Apparently, many men went directly to the phone and picked-up a free supply of Enzyte after seeing Bob and his wife smiling a lot. Unfortunately, there was a problem with the Enzyte product. It was all a scam.

A credit card number was required to pay the shipping fee for the free samples. The company then began to charge that credit card for monthly deliveries of the herbal mixture. When you got the free sample, you had automatically enrolled in the monthly plan.

Complaints were referred to a non-existent department within the company and customers who said the product did not work were asked to go to their doctor and get a note to verify the "problem." Needless to say, eventually some folks were going to be heading for jail.

Click here for the story from the AP about the 42 year-old president of the company that sold Enzyte going to federal prison for 25 years. Conspiracy, fraud and money laundering were going-on at the company constantly even while the ineffective but harmless mix of herbal suppliments continued to be shipped nationwide.

It was several years ago that complaints first began to surface about the male enhancement product. Click here for a USA Today story about the real ingredients of Enzyte. "It makes no sense medically," said one well-known Urologist.

All the same, many TV networks were happy to take the cash from this company despite the on-going federal investigation and publicity. Perhaps, the final result of this scam will be a new set of standards for national TV advertising of herbal solutions that are not federally tested and have no actual medical value. The TV networks were the conduit that made this corruption possible.

All of this took place in the Cincinnati area, and you can click here for the final article where the details of just how corrupt and devious the company practices actually were to customers. The judge in the case had trouble with the sentence because no one could really calculate just how many hundreds of millions of dollars this scheme had generated.

So, "Smiling Bob" will not be returning to the airwaves and will slowly fade to become just another fascinating element of this culture and a Wiki page on the Internet forever.

The remaining ED products advertised in NASCAR are prescribed medical drugs promoted by well-known pharmaceutical companies and prescribed by a physician. It certainly was an interesting run, but so long "Smiling Bob."

The Daly Planet welcomes comments from readers. Just click on the COMMENTS button below and follow the easy instructions. The rules for posting are located on the right side of the main page. Thanks for taking the time to stop by.
Posted by Daly Planet Editor at 5:52 PM 25 comments:

Saturday on SPEED: Trucks and Shows 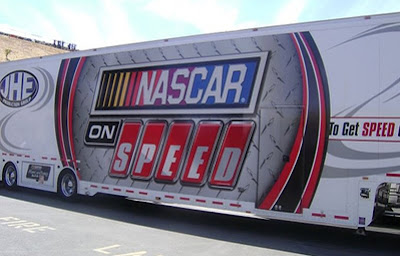 This should be a fun day to watch SPEED with the diverse NASCAR programming and the unusual circumstances taking place in Richmond.

The Craftsman Truck Series crew is in Gateway and will originate three programs on Saturday. Rick Allen will host qualifying at 11AM live with Phil Parsons and Doug Richert alongside this weekend. Krista Voda will be back with The Set-Up at 2PM. Coverage of the race itself will start at 2:30PM. Ray Dunlap and Adam Alexander will round-put the TV crew as pit reporters.

Over in soggy Richmond, SPEED will bring Tradin' Paint with John Roberts and Kyle Petty along at 12:30PM. This week the media guest will be Jenna Fryer, who is one of the most popular guests. This AP reporter always had some interesting opinions.

NASCAR Performance is next at 1PM. Hosted by Larry McReynolds along with Chad Knaus and Bootie Barker, the show offers a discussion of NASCAR topics from a crew chief perspective.

Next up is NASCAR in a Hurry at 1:30PM hosted by Randy Pemberton. The show catches viewers up-to-date on the events at the track since the Cup Series arrived.

This post will host your comments about the Saturday line-up on SPEED. To add your TV-related comment, just click on the COMMENTS button below and follow the easy instructions. The rules for posting are located on the right side of the main page.

Thank you for taking the time to stop by, the full weekend NASCAR TV schedule is listed on the main page.
Posted by Daly Planet Editor at 10:25 AM 27 comments: