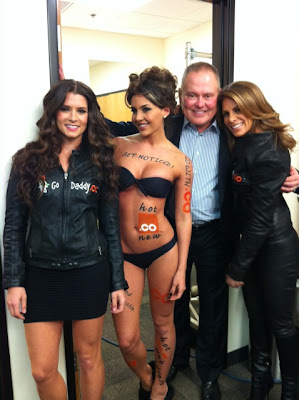 2nd Update Friday 10/19: ESPN's Women's themed website has lept to Danica's defense with an article from motorsports veteran Brant James. Click here to read about Go Daddy saying just how much they value the Danica "brand."

Update: This Daly Planet column was first published back in June. Click here for a current story in USA Today reinforcing the fact that Patrick has not been seen in new Go Daddy ads since the company switched advertising agencies. Patrick is ready to drive full-time in the Sprint Cup Series next season. There are also some great reader comments from the time of the original posting. Feel free to add your opinion.

The images are burned into the minds of motorsports fans nationwide. Danica Patrick and her GoDaddy girlfriends pushing sexual innuendo across the TV screen. Danica and the stripping cop, Danica taking a shower and Danica joking about keeping her "beaver" safe are just a few of the tasteless offerings.

The engineer of the economic train that ultimately brought Patrick to NASCAR is Bob Parsons, the man pictured above. The founder of GoDaddy might be the ultimate creep to many, but like most self-made billionaires he sees himself as above it all. It's just a game to him driven by sales.

Last summer Parsons finally cashed out of GoDaddy in a deal that saw a group of private equity firms pay a total of $2.5 billion for the company. Parsons stepped aside from running the day-to-day operations and Warren Adelman became the company's new chief executive. Parsons remained connected to the new group and is being called executive chairman.

Little changed immediately, but Adelman has been dropping hints that the company is planning to go in a different direction. Not in terms of changing it's basic service of registering Internet domain names, but in presenting the overall image of the company to the public. Now, that change has begun.

Tuesday the New York Times confirmed that GoDaddy has hired a prestigious advertising agency called Deutsch New York to reshape the company's image. The rebranding will begin immediately with the first new TV commercials airing later this summer in sporting events including the Summer Olympics.

The chief executive at Deutsch New York is quoted as saying GoDaddy did a "terrific job generating awareness." That same chief executive, who will now be in charge of the Internet company's new TV commercials, also called the older ads disruptive.

The chief executive of Deutsch New York, called one of the most powerful people in TV advertising, is a woman named Valerie DiFebo.

Elliott asked her to comment on the current GoDaddy ad campaign:

"As a woman, is it my favorite work?” she asked rhetorically, then replied, “No.”

On the topic of the future of the GoDaddy Girls:

They "will still have a role, but more in balance with what the brand has to offer," said DiFebo.

On the theme of the new ads for the company:

"The ads will tell more of a story about GoDaddy’s technology rather than entice consumers with appeals like 'To see more skin, click here,'" she added.

While Patrick and her management team have worked to broaden her commercial appeal, GoDaddy is the foundation that funded her current Nationwide Series ride and was said to be poised to continue that funding for a full time Sprint Cup Series team.

The immediate effect of this change in GoDaddy's philosophy and advertising is that Patrick's presence on TV will be reduced dramatically in just the next few weeks as the company shifts to the new commercials and image campaign. So no more body painting, dangling bikini's or veiled threats of nudity during NASCAR races.

The sport has seen a wide variety of sponsors come and go. The big question on the table is just how long Patrick's current GoDaddy contract is at this point and whether the rumored shift to the Sprint Cup Series next season is still in the works.

It won't make much sense for GoDaddy to play in NASCAR if the driver is not actively part of the company's rebranded ad campaign. This story has a lot more to be revealed over the next few weeks. Ironically, those words sound familiar.

We invite your opinion on this topic. Comments may be moderated prior to posting.
Posted by Daly Planet Editor at 6:00 AM 60 comments: