Click On The Title To Read The Latest
Anonymous Sources Rule Wednesday
Will "NASCAR Confidential" Answer The Lingering Questions?
Jarrett Speaks His Mind On The "Total Disaster"
Sprint Cup Practice Sessions Finally Get On TV

TV News:
Here is the link everyone has been sending me. Krissie Newman sounds off on David Newton without ever saying his name.

Chad Knaus will be back with Michael Waltrip and Steve Byrnes on Monday's TWIN. All 4 ESPN pit reporters on NASCAR Now.

SPEED's Tom Jensen on Tradin' Paint with Kyle Petty, who is not driving at Pocono. Kevin Harvick guests on Trackside. Kiefer Sutherland on RaceDay and is also Grand Marshal.

We have opened this post to comments. Just click on the COMMENTS button below. The rules for posting are on the right side of the main page. Thanks.
Posted by Daly Planet Editor at 6:30 PM 48 comments: 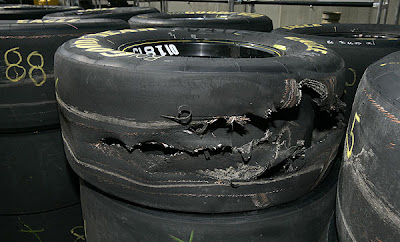 There are almost no NASCAR-related TV series on-the-air aside from the programs produced from the Sprint Cup Series tracks. Fans searching the 500 cable TV channels on weekdays find a daily news show on ESPN2 and one Monday talk show on SPEED.

Chomping at the bit to provide more long-form NASCAR TV programming is the official TV and media arm of the sport, called The NASCAR Media Group. This season, they have been walking a very thin line with SPEED by providing that network only one limited long-form programming series. It is called NASCAR Confidential.

This behind-the-scenes look at the sport deserves to be on SPEED after every Cup race. But, instead of 38 episodes SPEED ordered only 6. Now, after the unprecedented problems at Indy, it will fall to a special newly-added episode of NASCAR Confidential to show fans the reality of that difficult Sunday. Somehow, there is a large dose of irony in that fact.

“NASCAR Confidential continues to deliver a viewpoint never before offered to race fans on a regular basis,” said SPEED SVP of Programming Steve Craddock. “The scale of what happened last weekend is unique and required quick-thinking and pressure-filled decision making from everyone involved. This program will show race fans just how complicated the process was and how everyone rose to the occasion to pull off a complete race under incredibly adverse conditions.”

In other words, this type of programming series has value, but only once and a while. NASCAR Confidential is one of those point-of-view programs that uses a background announcer and features the real people in the real circumstances as NASCAR events unfold. This season, the characters featured on the series have been just as diverse as the sport itself.

The first airing of this special program, titled NASCAR Confidential: What We Learned At Indy, will be on Friday at 6PM ET. It will be re-aired on Saturday at 11PM. The key to this show is that The NASCAR Media Group has all the original footage from all the angles during the entire weekend. In addition, they have exclusive footage that has never been seen before documenting the growing problems as the Indy weekend went forward.

This is a great response by NASCAR and SPEED to the growing unrest among the fans and shows the power that NASCAR TV has when it is used effectively. Nothing can substitute for showing the fans first-hand what went on at the track, be it a positive or a negative experience. Fans are willing to forgive, but only when they believe the truth is being presented.

This announcement comes on the heels of SPEED adding live coverage of the Sprint Cup Series practice sessions for the rest of the season. The network already has the TV franchise when it comes to the weekend SPEED Stage programming that fans have been watching for years. In addition, the Monday night This Week in NASCAR series is finally back-on-track and creating a buzz.

Nothing would be better than watching SPEED continue to open the doors to some quality NASCAR programming and help get this sport back-on-track in this difficult time. Our review of this program will be available on Friday, shortly after the program concludes.

The Daly Planet welcomes comments from readers. Simply click on the COMMENTS button below and follow the easy instructions. The rules for posting are located on the right side of the main page. Thank you for taking the time to stop by.
Posted by Daly Planet Editor at 6:00 PM 27 comments: 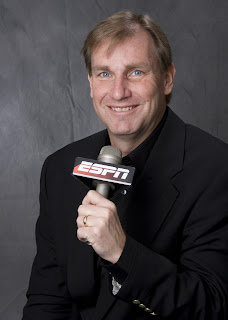 The barren wasteland of Wednesdays continues to haunt the NASCAR Now gang in 2008. The last race is long since done, the previews don't make sense until Thursday and the industry news is slow. What to do?

ESPN2 has tried to answer this question over-and-over again on this NASCAR show. One solution is apparently to just make things up. When NASCAR Now needs that, they summon David Newton. Even after Newton's recent public relations disaster with Martin Truex Jr. and DEI, there he was front-and-center once again. Here is the Truex reaction to Newton's original report.

On this Wednesday, Newton stated exactly the same thing about Ryan Newman that he had said about Truex. Newton's assertion was that Ryan Newman had signed with Stewart-Haas Racing. He knew this from an anonymous source. He also knew that there were lots of details that needed to be worked out, so there probably would not be an announcement about this topic for a long while. How convenient.

While on-camera, Newton spoke quickly and nervously about this topic. He sometimes spoke so fast it was hard to understand what he was saying. Host Ryan Burr was quick to interject that a Stewart-Haas spokesperson had denied Newton's report by saying talks were on-going with several drivers. Burr actually said "that is their reaction to your news today."

Newton was next quizzed about Kyle Petty's future since the announcement that he would sit-out Pocono and Michigan. Newton said he "talked to somebody in the garage" who told him Kyle was contemplating what to do next season. Newton said Petty was considering becoming a full time (TV) analyst next season. That would mean Petty would unseat either Phil Parsons, Dale Jarrett, Rusty Wallace or Jimmy Spencer. Is that really what Newton wanted to suggest?

Burr was not letting Newton off-the-hook and the experienced news anchor had a lot more questions. Next up was the Truex fiasco and Burr asked Newton point-blank if "anything had changed" since Newton's original story and Truex's angry denial. The answer was once again that the reason Newton's story had not been confirmed was that "there are details to be worked out."

During this entire segment, it seemed that Burr was questioning Newton's credibility. In fact, when Brad Daugherty was brought-in to the program, Burr's first question to Daugherty asked about "Newton's report" of a signed Newman contract. Unfortunately, new Sprint Cup Series owner Daugherty ran away from the issue at a very high rate of speed.

"I think its an outstanding opportunity." said Daugherty side-stepping the question. Daugherty referred to the potential combination of Stewart and Newman as the "dynamic duo." It was Daugherty's assertion that things between these two would go fine, unless the cars did not run well. Sometimes, Daugherty just misses the mark in this solo role as a commentator.

Burr was still not done with Newton's credibility. NASCAR Now next played-back a videotape of Newman shot Wednesday while he visited the Buffalo Bills training camp. On it, Newman is asked about Stewart. "He has his stuff to do and I have my stuff to do and there are other options out there," was his response.

"That doesn't necessarily seem like a guy that is 100% committed," said Burr of Newman. Burr asked Daugherty about this issue and again Daugherty ran for the hills. His response was about Roger Penske's ownership history and the fact that if Newman made the move to Stewart-Haas, he would be starting from scratch. As most fans know, Haas is one of the most well-equipped smaller teams and Newman would be getting, among other things, a wind tunnel.

This show had almost a creepy dynamic to it as Newton made his way through his NASCAR stories. That feeling grew as the host openly challenged one of ESPN.com's own NASCAR writers about the validity of his "sources" and the information that resulted. When is the last time we have seen that?

Last season, ESPN's reporters provoked strong reactions in the garage with their tabloid style of journalism. All three of those reporters, David Amber, Bob Holtzman and Wendy Nix were quietly removed from the NASCAR beat this year.

NASCAR Now has enjoyed a re-birth since February and has been one of the best surprises on the NASCAR TV scene. Now, things seem to be taking a turn for the worse. Long before ESPN returned, NASCAR had an extensive network of experienced journalists working full-time on the sport's top circuit.

Today, between 24 hour radio channels and thousands of websites, NASCAR is one of the most well-covered professional sports in America. To simply believe that Newton can develop and then report stories before other Charlotte-based media members is ridiculous.

The reality is simply that he is being allowed to report them on-the-air without the verification that experienced journalists would require.

Judging from the internal tension on Wednesday's NASCAR Now, perhaps this practice will cease before drivers and teams decide that talking to any ESPN reporter for the rest of the season might be a bad idea.

The Daly Planet welcomes comments from readers. Simply click on the COMMENTS button below and follow the easy instructions. The rules for posting are located on the right side of the main page. Thank you for taking the time to stop by.
Posted by Daly Planet Editor at 5:01 PM 32 comments: