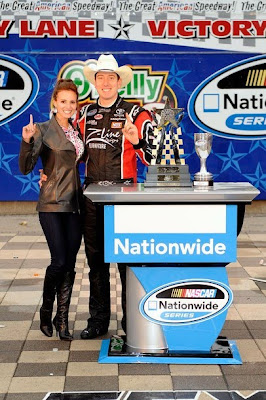 What a Monday of NASCAR TV. FOX got the day started with the Sprint Cup Series race. Chris Myers and Jeff Hammond stayed in the Hollywood Hotel although there was no pre-race show. Mike Joy, Larry McReynold and Darrell Waltrip were in the TV booth.

The telecast followed the formula that we have seen from FOX this season. Mike Joy was low-key with Larry McReynolds providing the excitement. Darrell Waltrip offered his opinions and sometimes needed a little help on the specifics.

There was no rain delay, but there was a major accident that caused a red flag. The action was typical of the Texas track, focusing on several laps of racing after restarts until the field gets strung-out. The Hendrick cars were featured for a large portion of the race and the FOX announcers spoke extensively about the Hendrick organization.

The FOX pit reporters were Steve Byrnes, Matt Yocum, Dick Berggren and Krista Voda. After being on the air for several hours on Sunday, they had a full-length Cup race to do on Monday. FOX is the network that under utilizes the pit reporters and did again in this race.

The FOX telecast concluded with almost an hour of time left for post-race. FOX used about twenty minutes and left before 4:30PM ET. Most viewers reported local shows inserted by the FOX stations. No explanation was given when FOX did not fill the timeslot or at least remain on the air until the half-hour.

ESPN2 was next and blasted onto the air with the Nationwide Series race. Marty Reid, Rusty Wallace and Andy Petree were in the broadcast booth. Dr. Jerry Punch, Jamie Little, Dave Burns and Vince Welch handled the pit road reporting duties.

Reid has changed the ESPN coverage and never let down his high energy style. Wallace is a bit awkward in this role, since he is an NNS owner, but held his own. Petree has been solid for ESPN since this TV package began in 2007.

The race was the normal parade of the Cup drivers vs. the Nationwide regulars. Credit ESPN for keeping the pictures wide and searching for the racing on the track. The pit road reporters provided recaps during the race and followed the pro-active style of the "new" NASCAR on ESPN team.

These two races began at 12 and ran through 7:30PM ET. There was about a 45 minute break between races for TV viewers and NASCAR fans. There were no technical problems, which is a big credit to the networks and the NASCAR Media Group who maintain the TV compound.

This post is your opportunity to offer your comments on both the FOX and ESPN coverage of the Monday doubleheader. To add your TV-related comments, just click on the comments button below. This is a family-friendly website, please keep that in mind when posting. Thanks for hanging in there and stopping by The Daly Planet.
Posted by Daly Planet Editor at 12:15 PM 22 comments: