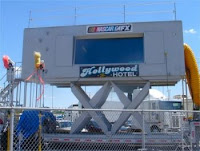 Several weeks ago, the NASCAR on Fox gang unveiled the new 2007 version of "The Hollywood Hotel." Fox updated this infield production and studio unit to be completely enclosed, eliminating the window views and direct connection to the NASCAR pit road and garage area. In the first week, things were awkward. Now, things are just bad. Let's face it, just like the COT, the new "Hollywood Hotel" needs some tweaking.

In the old model, the "background" was real. Whatever was happening in reality at the track was happening in reality at the "Hotel." Rain, sun, wind, and even snow has been featured over the years. It allowed the fans to "connect" with the location of the "Hotel," and feel that Chris Myers and Jeff Hammond were watching the race...just like them. So to turn a phrase, it "kept things real."

Now, it quickly becomes apparent to viewers that the "Hollywood Hotel" actually could be located in Hollywood. Other than a brief visit by Darrell Waltrip in the opening segments, Myers and Hammond could be on the Fox Lot on West Pico Blvd. in Los Angeles. The rear screen projection image on the set during the pre-race just "sits there." It does not change, give a panorama, or play a role in any part of the actual show itself. The problem is that the image used as the background confirms for the viewers that the "Hotel" is "really not right there." It is video from a camera not mounted on the "Hotel" itself, but selected from the array of NASCAR on Fox cameras around the track.

In TV land, a multi-person set has to have "ease of flow." This means whatever the announcers need to do on the set can be done without any problems. Unfortunately, the biggest flaw in "Hotel-land" are the live shots. A small box on the far "stage right" of the set shows the guest, and the on-set gang has to look over ninety degrees to the right to even see the box. Poor DW was actually leaning over both the desk and Jeff Hammond to "see" Kyle Busch during an interview. This needs to change, and there are plenty of easy solutions.

During the race, it now appears that Chris Myers truly is in the Fox Studios in LA. There is no noise, no crowds in the background, and absolutely no "reality" involved. The air conditioner hums and the lights are bright and the host has great hair and all is perfect. What a big mistake. The entire appeal of the "Hollywood Hotel" was that Fox Sports made a commitment to be live in the garage and pit area throughout the entire race. It clicked with fans, it made Hammond a star, and it gave Fox a location to use new toys like cut-a-way cars and explain what just happened on the track...because they were there.

Now, Fox could save some money by just parking the "Hotel" on the Fox lot, and letting Myers and Hammond stay in-town. Scatter some car parts outside, pump in some at-track video, and the "Hollywood Hotel" would have truly come home. The sad part is, no one would be the wiser.
Posted by Daly Planet Editor at 1:48 PM

It took America a while to get it, but we did. The "SPEED-a-palooza" that is RaceDay has become a franchise for the SPEED Channel. At first Jimmy Spencer and Kenny Wallace had a little trouble fitting in with the TV pros like John Roberts and Wendy Venturini. Then, things came together and both Spencer and Wallace found their roles. Now, the drivers watch it, the fans watch it, and there is no doubt that NASCAR loves it.

This season, as this two hour live show continues to build, SPEED faces the challenges that every successful TV series must deal with sooner or later. RaceDay now finds itself burdened with extreme advertising sponsorship, and many sponsored segments that pop-up awkwardly in the flow of the show itself. In addition, the network has recognized that RaceDay is a huge opportunity for promotion of the SPEED Channel, and the result is obvious. Lots and lots of on-air promotion for both the good and not-so-good programming on SPEED.

While these two elements have taken a little bit of fun away from the show, host John Roberts has used his smooth and casual style to bring out Spencer and Wallace as never before. In their "SPEED Court" segment, the threesome dress-up in black judicial robes and white wigs to "hold court," and then "pass judgement" on issues of the day. The outfits hide the fact that RaceDay is trying to address the type of pressing and sometimes controversial issues that resulted in the demise of "Pit Bulls," and the sanitizing of "Trading Paint." These two SPEED shows tried to step outside the tightly controlled NASCAR box and address controversial issues, only to be flattened like a blade of grass by a Lawn Boy. RaceDay deserves some credit for hanging in there, even if Jimmy Spencer in a wig leaves a big opening for creative humor.

Finally, we once again address the talented Wendy Venturini, who many times has been suggested as a person who could step into the struggling Inside NEXTEL Cup Racing series for Dave Despain. Wendy has used her RaceDay role to cement herself as the top NASCAR NEXTEL Cup reporter. Give John Roberts and the crew credit, they give Wendy free reign in terms of her interviews, her opinions, and her fearless ability to chase a story. There are bigger things in store for this young lady, and it will be interesting to see what she is offered in the future.

RaceDay is working hard to strike a balance between the irreverent and the corporate. As the season hits its stride, we all will witness the success or failure of this challenge as NASCAR heads for the bigger tracks, with more on the line.