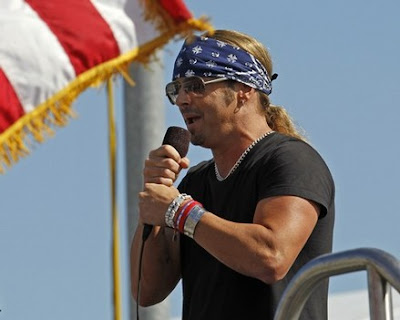 Update: We are starting our look back at the 2010 season with one of the most popular topics. Click here for a listen to the Bret Michaels and friends version of our national anthem at the Sprint Cup Series finale in Homestead, FL. This was just one of the many interesting versions of this song heard along the NASCAR trail in 2010. We invite your comments on this topic as NASCAR and the various tracks make plans for next season.

This column was originally published August 17, 2010:

One Twitter user referred to the Saving Abel rendition of the National Anthem at Michigan International Speedway as "The Star Mangled Banner."

Click here to see what folks are still talking about and what got the MIS phone lines lit up for hours.

Here are some other comments from around the media world:

Even by the woeful standards of NASCAR national anthems, the rendition before the MIS race, by members of the band Saving Abel, was wretched. (Monte Dutton, Gaston Gazette)

The band Saving Abel performed on Saturday night and apparently didn't save much for Sunday's national anthem. Several folks commented it was the worst rendition of the anthem at the track in years. (George Sipple, Detroit Free Press)

NASCAR and track promoters have sold out what should be the privilege of presenting the American national anthem to whatever singer has a new CD to promote, without regard for any sense of patriotism or talent. (Carol Einarsson, Race Journal Online)

While recent anger may be directed at Saving Abel, one only has to click here to remember the disaster at Loudon, NH when the remnants of the 1970's rock group Foghat delivered the anthem.

A favorite of many TDP readers is Jesse McCartney, a former Dream Street boy band member, who did the honors last October in Fontana, CA. Click here to see McCartney forget the words on a very public stage.

It may well be the individual tracks that provide the singers, but the impression is very different for fans watching on TV and even at the track. NASCAR and the associated TV partners, especially FOX, have tied themselves to patriotic and military themes since the new TV contract began in 2007.

At a time when the military is actively engaged in dangerous missions, the presentation of this song is the centerpiece of a pre-race show that has real meaning for fans and TV viewers. We pray, sing, flyover, start engines and race in America.

NASCAR has been more responsive to ongoing issues this season then ever before. Town Hall meetings have addressed financial, technical and competition topics. It's time to NASCAR to step-in and make sure the anthem is presented by a properly dressed singer capable of fitting into the pre-race show of a major professional sport.