Interesting Friday Ahead For SPEED 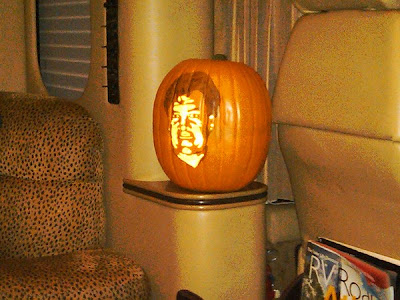 Just when you thought the Chase was getting a bit boring, business is about to pick up. SPEED has an all-day NASCAR Marathon from Talladega that should feature something for everyone.

On the track, there will be two sessions of Sprint Cup Series practice and coverage of qualifying for the Camping World Truck Series. Away from the track, things are getting stranger by the hour.

After Michael Waltrip's recent accident and subsequent questionable sobriety behind the wheel, AJ Allmendinger was stopped Wednesday night while driving through the very same town. This time, the intoxicated NASCAR personality was not so lucky.

Allmendinger was arrested for DUI, but instead of spending time behind bars with a public mugshot he was sent home after being cited and signing a promise to appear in court. That decision might have been just as positive for his career as picking up the #43 ride for next season. After the Waltrip warm-up, Allmendinger's mugshot would literally have traveled around the world online.

John Roberts starts the day for SPEED with NASCAR Live at 1:30PM. It should be interesting to see who the producer assigns reporters Randy Pemberton and Hermie Sadler to interview. If Allmendinger is not on the list, there are others who should be. One of them is named Larry McReynolds.

Wednesday, McReynolds took to Sirius Satellite radio to vent his new found anger about the recent series of interview articles published by veteran reporter Dustin Long. In a very public way, McReynolds basically blamed Long for painting him in a negative light. He went so far as to suggest that NASCAR personalities should no longer talk with Long due to issues of trust.

Long is currently the president of the National Motorsports Press Association. He has a long track record of accurate reporting mixed with informed opinions. Perhaps, McReynolds might like an opportunity to clear the air on TV. At least that would give him the opportunity to wipe whatever egg is remaining off his face.

On the track, McReynolds and company will cover both Sprint Cup Series practices. These sessions are often more exciting than parts of the race as the drivers practice seeing how their cars run in the front and back of the pack, as well as how well they draft. This is one session where in-car camera views are a blast.

Rick Allen will lead Phil Parsons and Michael Waltrip through Camping World Truck Series qualifying at 5PM. Waltrip has been silent on his recent impaired driving issue. It should be interesting to see if the Allmendinger incident gets a comment.

The evening caps with Trackside at 7PM that brings McReynolds into view again. The panel also includes host Steve Byrnes with Jeff Hammond and Elliot Sadler. Kevin Harvick and Carl Edwards are the guests.

Adding the outstanding Dave Despain on Assignment program about Talladega and a repeat of Inside the Headsets gives SPEED a solid nine hours of NASCAR programming on Friday.

With the topics noted above and two NASCAR series on the track, this should very much be an interesting Friday for SPEED.

This post will serve to host your comments about Friday's NASCAR TV. To add your TV-related opinion, just click on the comments button below. This is a family-friendly website, please keep that in mind when posting. Thanks for taking the time to stop by The Daly Planet.
Posted by Daly Planet Editor at 11:00 PM 85 comments: 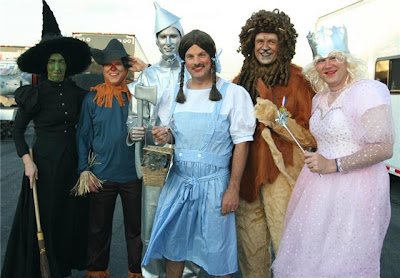 The picture above does not do justice to the faces of the drivers in the garage when confronted by Ray Dunlap as Dorothy (complete with Toto and the picnic basket) and Adam Alexander in full Good Witch gear, including the wand.

This was one of the many things that has endeared SPEED's truck series TV crew to the fans over the past few years. A lot of SPEED's NASCAR programming is produced by the NASCAR Media Group. This includes the programs from the SPEED Stage and the Monday night TWIN series.

The trucks, however, are produced by SPEED's own staff and operate as a stand-alone unit. The results have been great for years. However, after a groundswell of fan support last season that began to give the trucks a solid identity and great ratings, the bottom fell out.

After the troubles with the economy, the trucks took a huge hit. Sponsors were instantly gone, teams were parked and the bottom feeders came out to fill the field. Earlier this season in a race, 12 trucks in a field of less than 40 started and then simply parked to get paid. It's now a regular situation.

Salvation for the series and a new lease on life for 2010 may come with the Saturday afternoon race from Talladega. With the Sprint Cup Series along for a Sunday race, Kyle Busch will cross over to the trucks. In addition, a wild collection of drivers from Max Papis to Steve Park will also be in the field.

As many fans have heard, Mike Wallace and his daughter Chrissy are trying to be the first father-daughter team in the truck series. Chrissy has to qualify on time, but she has ARCA experience on this track and should get in the field. Mixing those two in with fast guys like Johnny Sauter, Todd Bodine and Ron Hornaday Jr. should make for some great TV storylines.

It's been the Krista Voda show for a long time in this series. Voda puts together a straightforward nothing fancy pre-race that last week consisted of her splashing in puddles and looking like anyone else at a rainy racetrack. The fans eat it up. Instead of goofy acting or tightly scripted conversation, Voda just lets it roll.

Rick Allen provides plenty of excitement with his play-by-play call and works hard to find the racing on the track. Originally, he was joined by Phil Parsons alone. Parsons is a great historian of the series and knows the racing connections among the teams from top to bottom.

It was the addition of Michael Waltrip that really shook up the status quo. Waltrip talks a lot. Despite his connections and Cup schedule, SPEED has stuck with Waltrip on this package and it is paying off. Having a high-profile NASCAR personality in the TV booth has brought the fans in who either enjoy or detest Waltrip's on-air style.

Solid production from a TV team that does not need bells, whistles and gadgets normally results in a fun race to watch. It looks like the vast majority of the 38 trucks entered are going to try and run the full race. The different storylines should be fun to watch. Imagine Steve Park, Max Papis or Mike Wallace getting to the front. The great Timothy Peters story from last week could also play out again.

On the flip side, if ten trucks decide to park, then one big accident could leave 15 trucks driving nose-to-tail on this huge track like it was practice. This is one time that heads-up driving and an understanding of the bigger picture for the sport really needs to play a role for all concerned.

SPEED hits the air on Saturday at 3:30PM with the pre-race and the green flag should fall around 4:10PM Eastern Time. SPEED will not reveal what might happen on this Halloween, but the pre-race show should be memorable. TDP will live blog this race, please join us then.

In the meantime, please feel free to leave your comments on the SPEED coverage of the CWTS, including your reaction to last season's Halloween high jinx. To add your opinion, just click on the comments button below. This is a family-friendly site, please keep that in mind when posting. Thanks for taking the time to stop by.
Posted by Daly Planet Editor at 6:00 AM 17 comments: