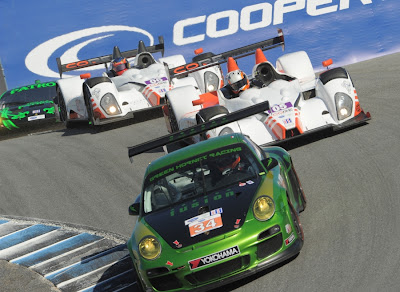 It was a news item that snuck right past many NASCAR fans. After all, sports car racing is for a different breed of motorsports fan. All the different types of cars on the same track is confusing. The drivers are mostly foreign, rarely well-known and there is little national media coverage surrounding the sport.

Well, all of that is about to change. The two major professional sports car series operating in the US have merged. The American Le Mans Series was owned by Don Panoz. The Grand Am Rolex series was owned by Jim France. Now, they are both owned by NASCAR. That's right, NASCAR.

Click here for a review of the official merger announcement from Jeff Olson at USA Today. As Olson reported, the total value of the deal was approximately $10 million. Aside from the under-used Road Atlanta and the crumbling Sebring track, the concept that NASCAR wants to totally control this brand of racing in the US is fascinating.

It's not hard to remember France talking about his Grand Am plans long ago. For the top series, he took the NASCAR template of requiring teams to use basically one chassis and gave them a choice of tires and engines. This was the polar opposite of the classic Le Mans style sports car environment of manufacturer prototypes fighting it out while trying to avoid the racing dentists in their rent-a-ride Porsches.

The result of the France plan was that Grand Am got a TV package and some media, but ultimately detached from the global sports car community. The season opening Rolex 24 race from Daytona took on an entirely different look. Grand Am's own "company cars" raced against each other without the feel and flair of real sports car racing.

France is NASCAR's executive vice president and vice chairman. He and Panoz will share senior management duties of the newly-merged sports car series with France taking the senior position. Lesa France Kennedy, who oversees the family's racetrack properties, and NASCAR's deputy general counsel Karen Leetzow are also prominent members of the new organization's board of directors.

All of this leaves a lot of unanswered questions on the table. The new organization has no name but will begin racing in 2014. There are no technical rules in place, no class configurations and few specifics available. Guarded optimism has been the polite response from various manufacturers.

""While we await further details on the homologations and rules for the individual classes," Ford director of racing Jamie Allison told Olson, "the new, unified approach has a lot of appeal to Ford due to the potential international alignment."

The bottom line is that this unholy alliance is essentially a buyout of ALMS by France and NASCAR. Click here for another take on the deal from Chris Gill of Gatehouse News Service. While it makes sense for the two weakened series to unite, even trying to imagine what configuration or classes the series may run is an exercise in futility.

Grand Am makes use of Kennedy's International Speedway Corporation tracks and runs several weekends with various NASCAR series. Now, France has cornered the market on professional sports car racing in the country and can essentially set the tone for the future with a blank piece of paper. While Panoz was the sole connection to Le Mans and the international set, his tone seems to have changed.

"This series that we are putting together is the American Sports Car Series," Panoz told Gill. "We have to take care of our own business, our own market, addressing our sponsors, our fans, our teams, and that’s exactly what we are going to do. Of course we are going to pay attention to what’s going on around us, but we’ll be acting responsibly in our own best interests."

Those words may foreshadow yet another switch in the strategic direction of sports car racing in North America. Whether this new series becomes more closely aligned with NASCAR in terms of racing, business practices and shared media resources is yet to be determined.

One thing is for sure, France and company will have a very busy 2013 trying to build a healthy sports car franchise amid a rapidly changing automotive marketplace and shrinking sponsorship environment. This may be the very last chance for sports car racing to get a toehold in North America and slowly try to climb the ladder of racing success.

We invite your opinion on this topic. Comments may be moderated prior to posting.
Posted by Daly Planet Editor at 10:34 PM 22 comments: