"Two And Done" For NASCAR On Fox 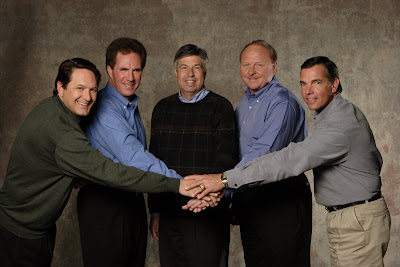 The days after the All-Star race mark the unofficial mid-point of the Sprint Cup season. Everyone takes a deep breath, and enjoys some time-off from the grind.

In "TV land" this is also an interesting moment in time as the remaining races in the NASCAR on Fox package dwindle down to just two. The Coke 600 will be next, and then the Fox gang moves to the Monster Mile in Dover as their finale.

The conclusion of the Fox portion of the NASCAR TV package signals several changes that fans know all too well. Some of these changes affect the personalities involved in the SPEED coverage of practice and qualifying.

However, the biggest change is the arrival of Bill Weber and the entire NASCAR on TNT crew for the next six events.

The NASCAR On TNT website sits quietly with Weber's last NASCAR story posted in November of 2007. The Hinder "Born to be Wild" video sits ready to be played. The banner at the top says NASCAR will be "coming soon."

TNT has no role in NASCAR before it arrives and no role once it leaves. TNT produces no other NASCAR TV programming and had a very difficult 2007 season. It is a six race package that brings endless promotion for TNT programming that overshadows and interferes with the racing. The contrast between Fox and TNT is remarkable.

Now, as the Fox season winds-down, the reality of the final 23 Sprint Cup races without Mike Joy gets very real. Joy has been a staple of so many NASCAR seasons he just seems to be a part of the sport. Fans will first transition to Bill Weber and then Dr. Jerry Punch will begin his second season in perhaps the highest-profile NASCAR TV job in the nation. Punch will call the final seventeen Sprint Cup races.

This is also the time of the year where Darrell Waltrip reduces his role on TV. His place on SPEED's Trackside is turned over to Elliott Sadler. His role in the TV announce booth becomes the property of Kyle Petty. Waltrip has once again been the highest-profile member of the NASCAR on Fox team this season.

Waltrip comes as a fascinating package for those who remember him from his prime days as a driver. While his enthusiasm for the sport is as vibrant as ever, he presents a combination of expert analysis and conflicts of interest that is as complicated as the man himself.

One moment talking passionately about safety and in the next selling Digger t-shirts on his own website, the mix has been polarizing for fans this season. Add-in his comments about both the success of Kyle Busch and the frustration of Dale Earnhardt Jr. and the result has kept Internet boards humming and call-in radio shows busy.

Chris Myers turns the Hollywood Hotel role over to TNT in-house announcer Marc Fein. Last season, Fein was in over-his-head where NASCAR TV was concerned. Seated on TNT's very strange spinning outdoor stage, Fein and Weber seemed to often be at-odds over who was actually hosting the pre-race programming.

Jeff Hammond will continue to be seen regularly on SPEED once the Fox package is over. He and sidekick Larry McReynolds seem to enjoy the experience of working every race weekend. No one, however, is harder working than McReynolds. He will return once again to the TNT package. Last season, it was often McReynolds and Petty that carried the TNT broadcasts.

The Coke 600 is rumored to be a possible TV nightmare with the new COT car. Dale Junior said very clearly after the All-Star race that merely hanging-on to the car for full fuel runs is going to be a challenge. As TV viewers saw, there was very little passing and track position was key.

So, the NASCAR on Fox gang has their work cut-out for them next week. After an Indy 500 telecast on ABC that might be the most interesting in years, it should be a challenge to present four or five hours of COT cars struggling at Charlotte. Look for a lot of on-air content to be generated by the pit reporters as the laps begin to grind-away and the race becomes a potential lesson in survival.

Far from the glamour of the Daytona 500 or the thrills of Talladega, the NASCAR on Fox gang will close-out 2008 with two grinding races on tough tracks. Last season, Kyle Petty's third place finish at Lowe's got a standing ovation from the fans but was not seen by the TV viewers.

That led to this Daly Planet column after a season of issues with the finish line. Missing the Coke Zero car finish the race in third place at the Coke 600 on national television was not something that went over well with the sponsors or the fans. Given the fact that Kyle was about to step-out of the car and into a TV job with TNT just made it all the more glaring.

This season, not showing the lead lap cars finish the race has still been a speedbump in what has been a solid production effort since Daytona in February. Hopefully, good weather and some actual racing from the COT cars will send the NASCAR on Fox gang off in style.

The Daly Planet welcomes comments from readers. Simply click on the COMMENTS button below and follow the easy instructions. The rules for posting are on the right side of the main page. Thank you for taking the time to stop by.
Posted by Daly Planet Editor at 11:28 PM 35 comments: 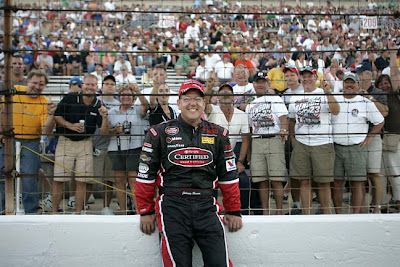 The weekly Monday NASCAR TV programs from SPEED and ESPN2 have now had a good three months to mature. Both the Monday version of NASCAR Now and the new This Week In NASCAR have been fun to watch this season as they develop.

With the All-Star race to review and the Coke 600 to preview, ESPN has once again shuffled the NASCAR Now on-air deck and brought in a new combination of "talent." Joining Allen Bestwick this week will be fan favorite Johnny Benson, veteran reporter Mike Massaro and NASCAR Now's Lead Reporter Marty Smith.

This one hour of conversation at 5:30PM Eastern Time features Bestwick running the panel through the race highlights and then talking about the upcoming event. This season, Bestwick has added a new dimension to this TV series and changed the entire Monday NASCAR TV dynamic.

Still attired in suits and ties, the panel talks about the topics of the day and often Bestwick brings up controversial subjects. Since February, Bestwick has been staring across the studio at a wide variety of personalities. This constantly changing landscape has resulted in some very good and also some very politically correct programs.

What Bestwick really could use down the stretch is a panel that consists of "regulars." Now that the initial interest in the format of the program is over, viewers would be well-served to begin to develop a relationship with the type of regular panel Bestwick had on Inside Winston Cup Racing back on SpeedVision.

Mike Massaro is the best example of that so far, as he is a semi-regular and has been allowed to show parts of his personality and voice his own opinions like never before. In all his years of working for ESPN, Massaro has finally come into his own because of this Monday show. Bestwick deserves some credit for that.

Once the ESPN panel is done, Steve Byrnes plays host to Michael Waltrip and Greg Biffle for This Week in NASCAR on SPEED. Starting at 8PM, Byrnes this week has his work cut-out for him with two drivers as the full panel. When Waltrip and Chad Knaus are on this program, things are presented from both the driver and crew chief perspective.

With two drivers, the perspective is the same and the differences of opinion don't have a third voice to keep things non-personal. Biffle has been a big story recently, and hopefully Byrnes will be able to draw-out Biffle's feelings on some of the on-going topics that concern his future.

Waltrip has been hit-and-miss on this show, working well with Chad Knaus and beginning to establish a good on-air relationship with Byrnes. Waltrip always seems to have his own agenda, but has managed to keep his sense of humor despite the many changes in the format of this program. It should be interesting to see how things develop with Biffle.

There will be columns up for your comments shortly after both shows finish, and please feel free to add your opinion to this post about the line-ups for both of these Monday TV shows.

To add your comment, just click on the COMMENTS button below and follow the easy instructions. The rules for posting are on the right side of the main page. Thanks again for stopping by.
Posted by Daly Planet Editor at 11:04 PM 21 comments: