No Jacket Required For "NASCAR Now" 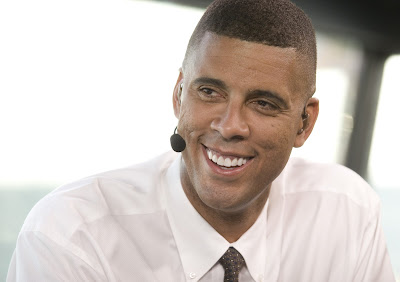 In the middle of the college basketball season, ESPN's NASCAR Now team stepped-up to the free throw line with everyone watching. The TV cameras were on, there was a high-profile visitor watching and there was an hour to fill.

The starting line-up ESPN chose to put on the floor was Allen Bestwick, Marty Smith, Andy Petree and Brad Daugherty. These veterans were ready for action.

Bestwick led the show with an explanation of the lack of suit jackets on the panel. The last time Brad Daugherty forgot an item of clothing, it was his suit pants. While ESPN was able to find a pair in time for the show, there was going to be no such luck in finding a suit jacket for a seven foot tall adult in Bristol, CT. Even the Men's Warehouse could not fill the void.

Without a Cup race, the manner on the show was easy and relaxed. This is exactly what the show needed as it continued to build momentum. A feature on the season-in-review led the panel into a serious discussion of pressing NASCAR issues. Daugherty, Smith and Petree all raised big topics that had not really been raised by the mainstream NASCAR media.

The type of free-ranging discussion led by Bestwick is the key to the success of this show. Daugherty was criticized at first, but often puts his views on the table so they can be discussed by the more experienced members of the panel. Give Daugherty credit, his enthusiasm never wanes and this is a good TV venue for his skills.

Early on, it was clear that the program would be an issue-oriented discussion. As the show went on, it then became apparent it would be the theme of the entire hour. What a nice change of pace for fans who are lambasted with highlights on most NASCAR TV shows on a regular basis.

Continuing to erase the painful memories of last season, it was clear that the NASCAR Now Producer had been given the green light to throw the doors wide open and talk about everything and anything under the NASCAR sun. From dollars to tires, and from personalities to failures, this show may have taken its format from the NASCAR message boards on the Internet.

Time-and-time again, the conversation came back to money. The country's economic crisis has taken a toll on NASCAR and is now actively affecting all three series. All four panel members were very clear in making solid points about the problems, and what can be done to address those issues. It was not a pretty prognosis.

At halftime, Bestwick changed the strategy and offered one topic for a quick comment from the panelists. The COT, Toyota, and Goodyear got some great reactions and some interesting comments from the panel. Petree was outstanding in his hardcore racing comments from his crew chief perspective, and his knowledge served to set the table for the comments from Smith and Daugherty. It was a nice mix of talent.

Surprisingly, Bestwick launched the most controversial topic when he said the words "NASCAR officials." To have an ESPN TV series that focuses on NASCAR having an open discussion about officiating borders on amazing.

The show included a nice recap of the Saturday stand-alone Nationwide Series race at Nashville, TN. It included soundbites from the winner and a good selection of highlights that told the story of the race. The Kyle Busch spinning discussion was interesting, and the panel pointed the finger at Busch for his actions.

IRL driver Danica Patrick was at ESPN promoting the upcoming season opener at Homestead. In another statement about the maturing of this series, she was quickly asked to come on the show and talk racing. The results may have done more to promote the IRL race than all her other ESPN appearances. Does anyone watch First Take?

Patrick was made to feel comfortable right-off the bat, and responded with a good interview. She was blunt in her response to her failure to win an IRL race, and was clear that she was gunning to win this season. In terms of NASCAR, she put her perspective on the table and then asked the panel why she should "come over" to NASCAR?

As the discussion progressed, it was clear that she was a politician and left the door open to the other "art form" of racing in the closed-wheel ranks. It was fun to watch her put the panel on the spot, and the "guys" struggle to tell her why she should change series. If she ever did decide to jump ship, it certainly would bring some new fans over to NASCAR.

As you might expect, the panel closed the show with a look ahead to the Martinsville weekend. This preview really put a nice end to a fast-paced and interesting hour program. NASCAR TV is being well-served on Mondays, and the mix of personalities in this show really clicked.

ESPN2 answered the question of how this NASCAR Now team would fill an hour with only one race to review. Each panelists came through with some interesting opinions and Petree predicted firmly that Hendrick Racing would be back up-front at Martinsville.

The result of this hour was that NASCAR fans are going to make plans to return next Monday, get some great NASCAR information and see if the ESPN2 dress code has changed once again. Maybe the panel could take turns forgetting a suit jacket, because the shirts-and-ties edition of NASCAR Now really clicked.

The Daly Planet welcomes comments from readers. Simply click on the COMMENTS button below and follow the easy instructions. The rules for posting are on the right side of the main page. Thanks again for taking the time to stop by.
Posted by Daly Planet Editor at 5:35 PM 35 comments: