Repost: When Media And Marketing Collide 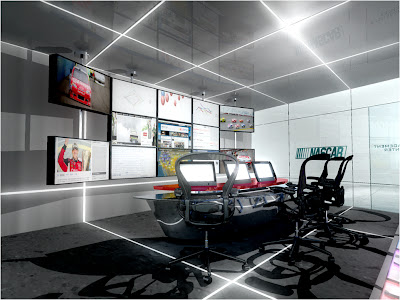 Update: The Fan and Media Engagement Center is now open. Here is my column on that topic originally published in July.

Change has been a buzzword in NASCAR for quite some time now. On the heels of the tragic passing of Dale Earnhardt Sr., a movement was set in motion to change the equipment in the sport. Now, over a decade later, it is the sanctioning body itself that continues to change.

Just as the COT became a familiar term for fans during the equipment transition, the term "brand marketing" has become a central theme as the sport reacts to the new media landscape. Long gone are the days of a powerful and robust NASCAR media presence at the track and across the nation.

The digital revolution has closed newspapers and magazines. It has ended the careers of many print journalists. Veteran fans can click-off the names of NASCAR reporters, writers and columnists who are now gone from the sport. The list of NASCAR-related print publications now out of business or limping along in an online form is familiar.

Over on the TV side, the last few months have seen the president of the NASCAR Media Group resign. The head of NASCAR's in-house TV production wing also left in the same shuffle. The Executive Producer of that same group, responsible for many of the sport's best TV and film projects, was fired late last year.

Just like the print media, NASCAR's TV presence has been a victim of change. Away from the track the demand for NASCAR TV programming has virtually ceased. In February, Showtime cancelled the high-dollar Inside NASCAR program. Over the last few years, SPEED stopped buying original NASCAR series and shifted to non-racing reality-style shows. Efforts to expand NASCAR program sales to other cable networks proved fruitless.

NASCAR was faced with a dilemma. While there was plenty of action on the track, the media pipeline to communicate that excitement was broken. Without enough reporters and writers to act as messengers, the media presence of the sport was shrinking. Without the TV shows dedicated to the sport, NASCAR's ability to cultivate new fans and to sell sponsors on the basis of national exposure was fading.

NASCAR chairman Brian France, after commissioning a professional review of these issues, decided to make a major internal shift. Instead of a stand-alone independent media presence reporting directly to him, NASCAR's entire public and media relations function would be moved to the marketing department.

Click here to read the official announcement. Ultimately, France hired the very executive who had done the review to become the new Chief Communications Officer. Brand marketing executive Brett Jewkes joined NASCAR to work for Chief Marketing Officer (CMO) Steve Phelps. In the blink of an eye, the pendulum had swung from the classic media and PR approach to a marketing-driven agenda.

In one way, the changes are easy to understand. The marketing department is used to creating content about the sport and directly distributing it. The pipeline established over the years to deliver information about teams, tracks and other topics to the media is still firmly in place.

The new configuration is called the Integrated Marketing Communications (IMC) department. Even Larry McReynolds would have been proud of the statement describing the IMC function. "The IMC will provide overall thought leadership in the communications space," said the news release.

The driving force behind this change takes us back to the digital world. Social media has changed the traditional role of the press by allowing direct interaction between sports organizations like NASCAR and the fan base. Facebook, Twitter and emerging specialty sites are now providing a bridge that lets NASCAR itself replace the role formerly held by the media.

NASCAR speaks directly to 3 million fans when it posts to the sport's official Facebook site. The sport's Twitter account has crossed the 500 thousand follower mark and is growing by the week. NASCAR has recently taken control of its own website and will providing all the content starting in 2013.

For the remaining media members, NASCAR provides a double top-secret website at NASCARmedia.com. Not only does this site provide raw content like press releases, photos and stats but it also provides complete stories on NASCAR topics that can simply be downloaded and used by news and sports content providers. It's a one-stop digital media shop.

While the Infield Media Center at the Sprint Cup Series tracks used to be the hub of activity for the sport, it now houses a group of reporters often all tweeting the exact same content for hours at a time. Follow ten reporters during a race on Twitter and you will get ten copies of basically the same running race commentary. The challenge for fans today is how to sort-out the best way to "consume" the race outside of the TV and radio coverage. NASCAR believes it has an answer.

Weeks ago, NASCAR embarked on a project with Twitter to jump in and control the flow of information being seen on the NASCAR twitter account. Now during races the content stream is "curated" by a Twitter representative as it happens. The resulting stream of PR-friendly information is dry as toast but fully under control. That is a familiar theme.

The most recent development speaks volumes about the future of the sport. In the NASCAR Hall of Fame studios in Charlotte, right next to the new NASCAR.com offiices, will be the Fan and Media Engagement Center (FMEC). A drawing of the new project is shown above. It might as well be called the Misson Control of Marketing. Click here to read the media release on the topic.

"A platform that facilitates near real-time response to traditional, digital and social media," said NASCAR about the FMEC in the release. "This is a clear example of our commitment to using cutting-edge technology to better inform our sport," said CMO Phelps. "Ultimately, this tool will help our industry connect with media and fans more effectively and efficiently."

What the FMEC also does while it engages fans and media is measure things. "Measurement also will be a key function of the FMEC," said the release. "Those capabilities will expand across qualitative and quantitative measurements and include tonality, volume, proximity and other coverage attributes in regular reports the FMEC will generate."

Now several IMC staffers can see, hear and respond to any snippet of information about the sport being sent by TV, radio or the Internet. On the new digital playing field, NASCAR is establishing a presence it had roundly rejected up to this point. Next season your Facebook post, tweet or chatroom comment could be weighed and measured in Charlotte without you knowing it ever happened.

The fear is that what goes missing from this configuration is critical throught. That is, the fundamental ability to disagree. While media relations types love a good debate, that is the last thing a marketing person cares to participate in. Opinion in the media is sacred, but in the marketing world it simply dilutes the message.

It will be October before the FMEC begins weekend duty and 2013 before NASCAR unveils its new website. While it's clear how we arrived at this place in time, that does not make it any easier to digest. Ultimately, the challenge for the IMC is to provide content that allows fans to believe they were informed about NASCAR without being sold a product or message at the same time.

That challenge could perhaps be described as simply passing along news about the sport vs. providing "thought leadership in the communications space." Makes you wonder just what Dale Sr. would have thought about all these bells and whistles.

We invite your opinion on this topic. Comments may be moderated prior to posting.
Posted by Daly Planet Editor at 10:00 AM 26 comments: