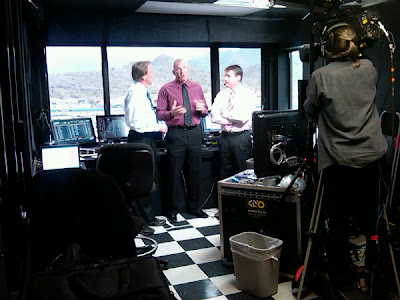 Nothing can describe the post-race chaos that happened to the NASCAR on ESPN team last weekend in Daytona. The audio failed on the Nationwide Series winner interview, then the network suddenly started a Daytona 500 preview show.

There were no interviews of key Nationwide finishers and a long delay of almost twenty minutes before a replay of the Nationwide winner interview with sound this time. It was just awful.

The icing on the cake was veteran broadcaster Marty Reid calling the wrong car dramatically crossing the finish line as the winner. Channeling his best Rick Allen, Reid tried to call the side-by-side battle, but wound up being embarrassed on national TV once again.

ESPN returned the same cast in front of the camera with the exception of Ray Evernham, who left to work on a project with Rick Hendrick. Jamie Shiftan is the new line producer and was a popular choice with the crew. Ultimately, the network returned to exactly the same type of coverage and ended the first telecast with a thud.

Phoenix is going to be a challenge for the ESPN TV director who likes to shoot the races tight and show only one or two cars at a time mixed with in-car camera views. PIR demands keeping a perspective for the TV viewers and that can only be done by effectively mixing wideshots with low-angle camera views.

The race off pit road is going to be key all night long and it will be important to use and hold the triple-split until all three cars are done with service. Otherwise, the viewer perspective will be lost. As we know from past telecasts, pit road at PIR both on the way in and the way out can be tricky.

Reid needs to rebound with a strong performance and cut-out the nonsense and hype. The Nationwide Series race looks to be dominated by three or four Cup drivers who are crossing-over and racing despite getting no driver points for a win this season.

It should be very interesting to see how ESPN handles two stories. The first is Danica Patrick, who is at her home track (Arizona resident) but struggling in the series and secondly keeping viewers up to date on the driver points race. That is, focusing on the drivers who have declared to run for the championship.

There is no catch-can man on pit road, so watching teams make adjustments on cars will be important. With the gas man busy, it will be up to one of the over-the-wall gang to get it done. It may be that the rear tire changer carries the first tire with him to free-up a crew member. Hope we see this on camera.

Allen Bestwick will handle the pre-race with Rusty Wallace and Brad Daugherty. Wallace is feisty already, mixing comments that are clearly motivated by his own perspective as a team owner with items like sponsor mentions. Daugherty has nothing to add except his enthusiasm and without Ricky Craven things may be a little less exciting in the pit studio.

There are plenty of good names in the field, which was short so no one went home. Several are still expected to start and park, while there are some new faces in the rear of the field who might make it interesting once lapping begins.

PIR makes for a beautiful aerial shot and has a ton of scenery. Hopefully, ESPN makes use of this for bumpers into and out of commercial instead of pre-packaged content. Dr. Jerry Punch, Dave Burns, Vince Welch and Jamie Little should be busy with pit stops but little else unless a multi-car incident happens. The red comes out quickly here as the track can be blocked instantly.

This post will serve to host your comments about the ESPN2 coverage of the Nationwide Series race from PIR. To add your TV-related opinion, just click on the comments button below. This is a family-friendly website, please keep that in mind when posting. Thanks for taking the time to stop by The Daly Planet.