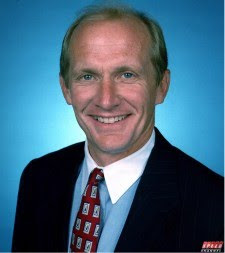 The saga of the network now known as SPEED is one of the most interesting stories in cable TV history. This week the evolution continued.

It was called SpeedVision and was a business partner to the Outdoor Life Network when I came across it operating out of Stamford, CT in 1996. Bob Scanlon was the executive producer and ran the programming and production departments. Scanlon is now running the new Velocity HD cable network owned by Discovery.

The Speed Channel name came next when Jim Liberatore ran the show as the network transitioned to Charlotte, NC. Liberatore was interactive with the fans during a time when the network began searching for a real identity. Liberatore is now the president of the Sportstime Ohio regional sports network.

Hunter Nickell, shown above, arrived in 2005 after running the SportsSouth and FSN South networks for more than a decade. A good FOX soldier, Nickell helped negotiate NASCAR and Formula One programming deals for the network now simply called SPEED.

This week brought more changes. Here is an excerpt from a network media release:

"Hunter Nickell, the president of SPEED, is leaving the network at years end. Nickell will finish several projects with SPEED over the next few months and continue to explore opportunities within the FOX Sports Media Group. An interim replacement will be named shortly." Click here to read the full release.

So, just like that another page is turned in the history of a TV network still trying to deal with a unique combination of issues. For the past several years, SPEED was criticized for not having a NASCAR daily news program or a studio show on weekends for race highlights. In 2010, Nickell took a step to solve that problem.

Motorsports TV veteran Patti Wheeler was brought in to become the Executive Vice President of both the production and programming divisions of SPEED. Wheeler formerly ran TNN Motorsports for a long time and also headed up World Sports Enterprises, a company that produced motorsports of all types.

Wheeler got the Race Hub NASCAR news show sorted out and then went about creating the SPEED Center concept for in-studio highlights and news on weekends. Suddenly, SPEED viewers had an informative presence to pass along all the information on racing weekends of any kind. That concept may now be over.

Last week, after only a year or so on the job, Wheeler decided to step away from SPEED and her executive duties. Personal reasons were cited, but clearly there is an ongoing dynamic at SPEED right now that has the ground shifting under the feet of those still employed.

What is driving this upheaval is even bigger changes for SPEED's parent company out on the West Coast. Heading up the FOX cable networks is Randy Freer, an experienced executive who took this position in January of 2011. Click here to see Freer talk about sports subjects in a Jon Weinbach interview for Fan House.

Nickell was not a person Freer chose for SPEED. In the world of sports TV, it's common for changes at the top to affect those executives on a lower level. There is little doubt that the new man at SPEED will be hand-picked by Freer and there will have been an existing relationship already in place.

You can imagine that perhaps Wheeler was not very happy finding out that after working for 12 months revamping SPEED, she would suddenly have to answer to yet another Los Angeles-based executive in order to get things done in Charlotte.

All of this swings the door open for major changes at SPEED, but as we know with the television world the pace is not rapid. We documented the new line-up of "lifestyle programming" SPEED has purchased and is now in production. Click here to read about stuff getting blown up, people quizzed at the gas pump and searching for car parts in the Bronx.

SPEED at one time featured cars, planes, boats and motorcycles in equal parts. Then, it moved to European racing shows, World Rally Cars and a weekly night of motorcycles. Now, it continues to look like two rival fraternities slugging it out on the cable TV airwaves.

Friday through Sunday are dominated by racing with solid programming, good information and informed on-air announcers. Monday through Thursday, however, continue to be a hodge-podge of programming that has never been able to make any daypart work effectively.

Nickell championed shows like PINKS, Stealth Rider and Wrecked, the "reality" show about a family operating a tow truck service in Chicago. Ultimately, a lot of what Nickell put on the air looked like imitations of A&E, Discovery and truTV. He called it "lifestyle programming" but many motorsports fans called it garbage.

NASCAR has no financial investment in SPEED. At one time, NASCAR was a partner with the FOX cable networks group. That partnership was dissolved and other than the TV production from the tracks on weekends, the NASCAR Media Group is just another program provider trying to get SPEED to invest in new programming for primetime.

The bottom line is that SPEED moved lock, stock and barrel to North Carolina to get more NASCAR content on the network in whatever form possible. Now, the challenge facing the senior executives at FOX in California and whoever steps into the new SPEED role is to once again try and define what programming model makes sense in these tough economic times.

Either SPEED is going to use the NASCAR Media Group (NMG) to generate new ideas for programming or we are going to see yet another shift further away from actual racing and motorsports. It's gotten so bad at NMG that company has actually been producing college football content in order to generate some revenue.

In the backyard of NASCAR, with the incredible happenings we have been seeing in the sport this year, there is absolutely nothing new on the table for SPEED from NMG. Not a reality series, interview program or morning talk show. None of the existing Sirius weekday radio shows are on TV, including the one done from the Hall of Fame.

We will all find out together the agenda of the new management group at SPEED when they are in place. In the meantime, we can just once again think about what could have been and hope that a robust and diverse motorsports and racing network has a place on the cable TV dial.