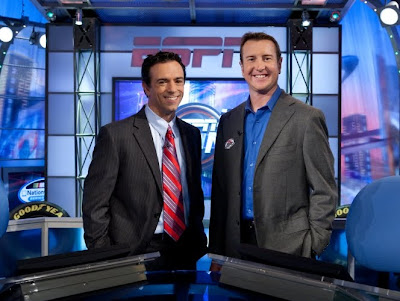 A new hat was thrown in the TV ring this week. From out of left field, a new daily NASCAR TV show has appeared at a very strange time and for rather suspicious reasons. The network is SPEED and the show is called NASCAR Race Hub. This expands the weekday NASCAR TV to three original series.

It will be Mike Massaro hosting ESPN's entry on Monday at 5PM ET in a show that does not re-air. NASCAR Now has been a big winner for ESPN2 this season. While normally hosted by Allen Bestwick, Massaro has been solid filling-in as the host.

The big gift for Massaro is that he has an all-star panel. Ricky Craven, Ray Evernham and Randy LaJoie will be making conversation and taking NASCAR. These three are absolutely the best combination on this Monday hour. Chemistry is tough to find on a three man TV panel, but this group is just great to watch.

Next up will be the new kid on the block. NASCAR Race Hub will be co-hosted by Adam Alexander and Krista Voda for the inaugural show at 7:30PM. This duo has been doing very well on The SPEED Report and is a good choice for this assignment.

Richard Petty will guest on this program. Voda will also update the rather interesting truck series test going on at Rockingham starring some unusual racing personalities. The location of the new thirty minute show is the SPEED studios and the network promises a new and unique setting. It should be interesting.

The day is capped with This Week in NASCAR at 8PM. This week the mix of personalities makes it a can't miss episode. Steve Byrnes gets the assignment of hosting this show which has recently undergone some personality and format changes. Byrnes is a veteran who can go with the flow on most anything.

Greg Biffle made the Chase and then struggled from the start. He had conflict with the Logano family on Saturday and then would up getting spun after a strong run on Sunday. Biffle has been working hard on his TV presence. Monday should give him a good opportunity to do a lot of explaining.

Michael Waltrip quietly made his way into the top twenty in the Sprint Cup Series race without as much as a peep from the ABC telecast. He has also been rumored to be courting Danica Patrick for a rent-a-ride and spoke to the media about wanting to run the entire Nationwide Series himself in 2010. This week, Waltrip may have to answer some questions from another panelist on those topics.

Jimmy Spencer returns after an outspoken weekend on NASCAR RaceDay. Spencer has lots of opinions on the teams and drivers in the Chase. It should be interesting to see if he is allowed to express them this Monday or continue to be the muted and user-friendly version of himself that appeared last week. Let's hope SPEED turns him loose to shake-up this TV series.

Monday is setting up to be a good day of TV viewing or recording, depending on your time zone and viewing habits. While NASCAR Now is sometimes rather scripted, the two SPEED shows both have lots of unknown factors and lots of potential.

TDP will have a column up shortly after TWIN to allow you to comment on all three shows. In the meantime, please feel free to offer your opinion about this topic on this post. Just click the comments button below. Thanks for taking the time to stop by.
Posted by Daly Planet Editor at 4:00 PM 45 comments: