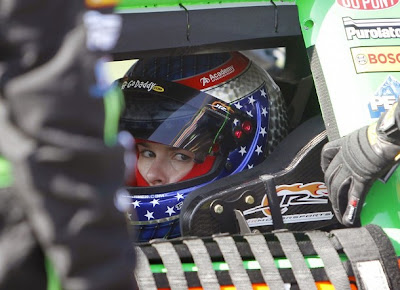 ESPN did it for Daytona and SPEED is doing it for Fontana. In the blink of an eye, the Nationwide Series Friday practice sessions from Auto Club Speedway are now live on SPEED at 2 and 4:30PM ET. Imagine that.

It seems that the TV ratings increases from the ARCA and Nationwide Series races in Daytona did not go unnoticed by the powers at SPEED. It should be interesting to see how they present the practice coverage knowing all too well that there is an elephant in the room they must acknowledge.

Steve Byrnes hosts the 2PM practice coverage. He is paired with his regular partner Jeff Hammond but SPEED has a surprise in store for viewers. Kyle Petty will be the third man in the booth for the first session. Reporting from the garage will be Wendy Venturini and Hermie Sadler. No word on which reporter has Danica.

The network will also slip in that other series, I think it's called the Sprint Cup. Those guys practice at 3PM and qualify at 6:30PM live. As usual, it's Mike Joy, Darrell Waltrip and Larry McReynolds to call both sessions. Dick Berggren and Matt Yocum handle practice while Krista Voda teams with Yocum for qualifying.

Mike Massaro and his NASCAR Now gang over at ESPN2 have a show at 6PM and SPEED's Trackside will round out the night at 8:30PM. Daytona 500 winner Jamie McMurray and driver Clint Bowyer are the guests.

ESPN was under the Danica microscope last weekend, now SPEED gets a turn for practice on Friday. The network will also handle qualifying on Saturday at 12:30PM before handing off to ESPN2 for the 5PM race telecast.

This post will serve to host your comments about this Friday on NASCAR TV. To add a comment about the coverage, just click on the comments button below. This is a family-friendly website, please keep that in mind when posting. Thanks for stopping by The Daly Planet.
Posted by Daly Planet Editor at 4:30 AM 37 comments: