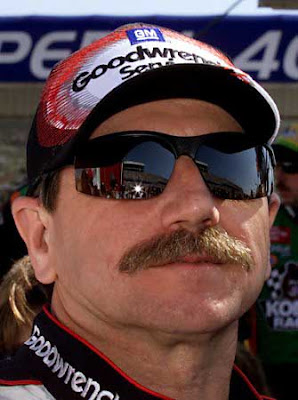 The power of classic NASCAR races on TV was never on display more than Monday afternoon at 2PM Eastern Time.

With Mike Joy and his veteran announcing crew calling the action, fans got to sit back and re-live an incredible moment in NASCAR history.

New fans or old had to experience a very deep emotional connection to the one man so vocal in his frustrations about not winning the Daytona 500. In Victory Lane at that speedway many times before, Dale Earnhardt Sr. had never been able to capture "the big one."

Fans who have been watching this on-going six weeks of historic NASCAR races on ESPN Classic had already witnessed the ultimate moment of frustration for Earnhardt as his tire went down and Derrike Cope sped-by to victory.

Now, there would be no problem and no issue in the way for Earnhardt. Ken Squier put the previous races into perspective while cameras showed a walk down the beach by the great NASCAR champions of the past. Highlights then showed the classic Daytona 500 finishes up to the 1998 race.

The CBS crew included Ned Jarrett. It seems to be appropriate that Ned's son Dale was just named as the lead analyst for the 2008 NASCAR races on ESPN and ABC. In this program, Ned teamed with Buddy Baker in the booth to offer the "old school" type of open and honest commentary sadly lacking in today's telecasts.

Mike Joy split the spotlight with Ken Squier, as Joy was being eased into the play-by-play role that Squier made so famous. In this race, Joy was simply outstanding. He seemed to be inspired by the great racing and good company in the booth. Over-and-over again he demonstrated the key ingredient to his success.

Joy could both direct traffic and call the action with a fluid ease. Like veteran announcers Eli Gold and Barney Hall, Joy can get your attention immediately with a simple change in the inflection of his voice. This was a NASCAR race that fans actually wanted to turn...up.

The CBS trademark style of using the cameras as wide as possible and then zooming-in only when needed continues to be the most remarkable change between the coverage of the past and today's "tech dominated" broadcasts were the cars appear between multiple on-screen graphics.

The program Director skillfully used the "video boxes" to keep interviews and on-camera pit reporters from dominating the screen. It was clear for the entire program that the focus of all the TV activity was the race itself.

As Earnhardt continued to be in contention, Joy slowly began to build the excitement. An interview with Richard Childress heard him say that his heart was with Earnhardt, because we all knew what this one race meant to him.

Inside of twenty laps to go, everyone knew just who the story would be. Jarrett began to raise his voice, in anticipation of what he knew would be coming. That was success or failure once again for Earnhardt.

With ten laps to go, Joy let loose. He began to recap the stakes for the drivers in the front of the pack, with the focus on Earnhardt. CBS made sure to show brief shots of the crowd, which had begun to surge in anticipation of a possible Earnhardt victory.

The CBS in-car cameras showed Jeff Gordon, Rusty Wallace and Jeremy Mayfield trying their best to catch Earnhardt. With only five laps to go, the CBS cameras kept almost twenty cars in the camera shot, and told the story of the entire field.

As Earnhardt took the caution flag with one lap to go, CBS stood back and let the reality of the moment unfold. Earnhardt had finally won. In the now famous shot, CBS used several cameras to document the crew members from every team standing patiently in line to congratulate Earnhardt as he made his way to Victory Lane.

Veteran NASCAR fans could only take a very deep breath as an excited and humble Dale Earnhardt stepped from his car to thank a lot of people. With so little footage of this late driver seen on TV, it was emotional to see the big smile, the big moustache, and the big heart of this man on display once again. This truly was a moment in time to remember forever.

The power of these telecasts is apparently lost on both ESPN Classic and SPEED, as neither chose to show any classic NASCAR races during the off-season. It was only a sudden switch of the programming schedule several weeks ago that brought these six Daytona 500 programs to the air.

ESPN Classic has twenty-four hours a day to re-air taped programming to tens of millions of viewers nationwide. With their eight year investment in NASCAR that cost billions of dollars, it is a shame that more powerful and classic races do not appear on-air. This one program might be the most dramatic NASCAR race...ever.

There are a couple of weeks left in this six week series that airs on Mondays at 2PM, clearly intended to be recorded for later airing by NASCAR fans.

The Daly Planet welcomes comments from readers. To add your comment, simply click on the COMMENTS button below and follow the simple instructions. Thanks again for taking the time to stop by.
Posted by Daly Planet Editor at 7:44 PM 28 comments:

It certainly is rare these days to break new ground in TV, but SPEED sent their crew to Las Vegas to continue the expanded coverage they are calling Pre-Season Thunder.

During the Daytona testing, several drivers told the network that this Las Vegas test will be critical to many teams. The reality of the COT is finally being revealed to the fans on national TV.

John Roberts and Larry McReynolds anchored this show from the Infield Media Center, and immediately jumped into the morning highlights. McReynolds was all over the information and updates on the first test session.

Driver soundbites told the tale very clearly that Goodyear brought the right tire and the apprehension about the COT was gone. In the afternoon, high winds and increased speed brought about several accidents.

While SPEED had that footage, the amount of on-track footage was a little light in comparison to the announcers time on-camera and the other talking heads. Not even one complete lap of one car was shown amid all the other features and interviews.

Roberts pointed to the high winds that affected the afternoon session, and perhaps that caused the less-than-stellar amount of on-track footage. As SPEED has continued to grow this pre-season franchise, they are faced with deciding if the shows should more resemble the network's qualifying or SPEED Stage type programming.

Bob Dillner provided reporting from the garage, and then took McReynolds place in the infield studio. Dillner expanded on the topics raised by McReynolds, and gave a good overview on the feelings of different drivers to the weather conditions.

It certainly is interesting that SPEED continues their lower third "ticker" during national commercial breaks. This feature adds almost nothing to the program, as it repeats the same information contained in the program that the viewers are currently watching.

McReynolds continues to add great technical features on these programs. This week, McReynolds pointed out the changes that the team were allow on the COT at Las Vegas. These are really the first substantive changes the teams could make since testing began. Great points that were easy for all the fans to understand.

Again, as McReynolds and Roberts were talking in the studio, cars were circulating on the track over their shoulders. Fans want to see cars on the track, and perhaps that could be an increased agenda as these testing shows go forward.

Dillner did an interesting interview with Matt Kenseth, who reinforced the words of McReynolds about the importance of this Vegas test. Kenseth provided good information in his own unique manner. It certainly would be nice to see Kenseth smile on TV just once this year. It did not happen Monday on SPEED.

SPEED did a solid job under tough circumstances to put together a thirty minute show with good content. For those of us who miss the on-track action, it sure would be nice just to see some packs of cars running at full speed while the announcers offered their information.

With good weather expected in Vegas on Tuesday, it will be nice for the network to have the opportunity to show fans the Speedway's fantastic infield fan area. The next two days should be interesting, before the coverage moves to Fontana.

The Daly Planet welcomes comments from readers. Simply click on the COMMENTS section below, and follow the instructions. Thanks again for stopping by.
Posted by Daly Planet Editor at 6:58 PM 17 comments: