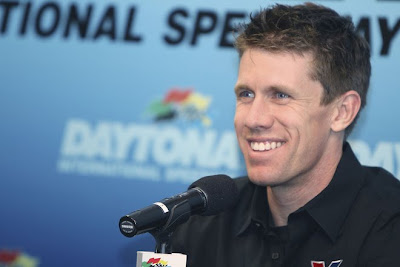 Now into the month of February the vast majority of on-air personalities working on race coverage for all four of the NASCAR TV partners are well known. We still need a TNT host to replace Lindsay Czarniak and wonder what Marty Reid's future holds, but there is one other big ticket item that seems to be still pending.

"Roush Says Edwards Headed To ESPN" was a TDP story from September of 2011. Jack Roush was addressing the media in the infield after a Nationwide Series race at Iowa Speedway. In an ironic twist, the speedway staff had put a live video feed of that interview on UStream.com.

In response to a question about the growing tension between Ricky Stenhouse Jr. and Carl Edwards, Roush gave this response to the media and the UStream live audience.

Although the small group of assembled media never followed-up on the topic, the fact that Roush confirmed Edwards would not be returning to the track in the Nationwide Series was news. The fact that Edwards would supposedly be joining ESPN was big news.

It had become quite clear in 2011 that ESPN had fallen in love with Edwards. In a "man crush" that rivals ESPN's current fascination with Tim Tebow, Edwards seemingly was invited to be on ESPN's NASCAR telecasts as much as possible.

Edwards often appeared as an ESPN pre-race guest from the Infield Pit Studio. If he fell out of a race, he would then appear on TV. Unlike other drivers, he was not being interviewed from the garage by a pit reporter. He was now back in the Pit Studio as a guest analyst. Edwards was also the only Sprint Cup Series driver selected to offer post-race analysis on ESPN for all the Chase races.

The Roush comments made even more sense when it was publicly confirmed just two weeks ago that Edwards will not run any Nationwide Series races in 2012. Edwards told Dave Rodman of NASCAR.com that he wants to concentrate on his Sprint Cup Series efforts, especially since a full time Cup driver can no longer win the Nationwide Series driver's title.

This week, Edwards continued to work on his television skills. Edwards was at the Tournament Players Club in Scottsdale, AZ on Wednesday, where he served as a roving reporter for the Golf Channel during the Pro-Am tournament leading up to the 2012 Waste Management Phoenix Open.

Luckily, NASCAR reporter Becca Gladden who writes for Insider Racing News lives in that area and was able to sit down with Edwards for a one-on-one interview. Since Edwards was there to work on TV, it only made sense for Gladden to ask him about his NASCAR television plans for this season.

Love him or hate him, Edwards is a master at leaving doors open for for things to "just suddenly" develop. In this short interview excerpt, he does just that once again.

This is the first time we have heard Edwards reference a perspective he has not experienced and one that has not been discussed. He speaks about being up in the TV booth and looking down at the racing. As veteran NASCAR fans know, folks just don't "show up" in the broadcast booth and work a race on national TV.

ESPN's current partnership is Dale Jarrett and Andy Petree for the Nationwide Series races. While Petree is an ironman, Jarrett takes a good bit of time off and his TV replacement in the booth is Rusty Wallace. Ricky Craven also filled that role last year on occasion.

Live NASCAR TV telecasts require an incredible amount of coordination long before the network even arrives on-site. Conference calls, meetings and assignments start the sequence of assembling the production elements, equipment and manpower that results in a race being produced for TV.

Of all the NASCAR TV networks, ESPN is by far the most organized and buttoned-up when it comes to who is on the air and what they are going to say. The ESPN announcers in the TV booth have to be prepped on many production elements inside the telecasts and the entire on-air team has to coordinate their efforts to make things work.

In a few short weeks, ESPN will unveil the network's NASCAR broadcast team for the 2012 season while the NASCAR media is assembled in Daytona. In the past, the network has used this occasion to offer some surprises. Ray Evernham showing up out of the blue to work for the network a while back is a good example.

This year, it should be interesting to see if Edwards puts on his suit and tie and takes a position alongside Jarrett, Petree, Wallace and Brad Daugherty. Judging from his most recent words, he is certainly leaving the TV door wide open.