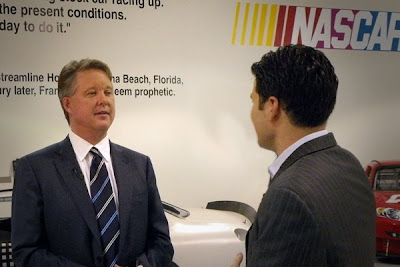 What a wild triple-header it is going to be when NASCAR TV hits the air on Thursday.

The first order of business is a TV special on CNBC at 9PM ET. CNBC's Sports Business Reporter is named Darren Rovell. He is pictured above with NASCAR Chairman Brian France. Rovell tries to cover the economic issues involved in all sports, but that task is impossible. Normally, he winds-up covering exactly the same stick-and-ball beat that appears on SportsCenter every night.

This week, a special is airing called Inside Track: Refueling The Business of NASCAR. Although that title might not be as long as the ones over at Frontstretch.com, it does drive home the point that this is not going to be a regular series. CNBC has simply dipped a toe in the NASCAR water.

Click here to take a look at the official web page for this special. You can view the video on this page if you have broadband access. Even good old Kevin Costner sneaks in as a Web Extra.

The economy has been a topic at TDP since January. The sponsor loss and team mergers during the off-season were painful. Many veteran NASCAR team employees lost their jobs. Many drivers lost their rides. Into this situation, several months late, comes Rovell and CNBC.

What questions he brings and what conclusions he draws will be interesting. Like the IRL, the NHRA and other professional motorsports organizations, NASCAR has seen a significant loss in revenue from manufacturers and sponsors. Hopefully, Rovell will keep things in perspective and stay away from singling-out NASCAR as alone in these troubles. TDP will review the show and have a column up for your comments shortly after it concludes.

There are only two more episodes of NASCAR Now to go before ESPN reaches a milestone. Once Nicole Manske ends the 10AM Saturday version of the show, ESPN will have gone through the entire Fox and TNT season without promoting a single Sprint Cup Series race on television. What an accomplishment for the Worldwide Leader in Sports.

ESPN held NASCAR hostage for almost six months and no one lifted a finger about it. Do you think when NASCAR agreed to let ESPN originate a daily NASCAR news program that not promoting the Sprint Cup Series races was even a possibility? Well, it has happened. Chicagoland is the final non-ESPN Sprint Cup Series race.

Starting Monday, the entire tone of NASCAR Now will change. Each race will be endlessly promoted with detailed "advancer" pieces and interviews arranged specifically to promote the final seventeen Sprint Cup Series events.

ESPN had demanded that Fox and TNT promote the ESPN Nationwide Series races within the Fox and TNT live race broadcasts. In return, ESPN would be nice enough to promote the start time and TV network of the race they had just spent an hour previewing. Needless to say, neither Fox or TNT cared about NASCAR Now so no deal was made.

As we said during the season each time we reported on this ego-driven fiasco, the only people being hurt in this deal are the fans. At a time when NASCAR needed all the TV partners on the same page, ESPN decided to play politics. Six months of not promoting a single Sprint Cup Series race on the NASCAR Now TV series. Shameful.

Click here for the amazing story of "Wrong Way Jeremy Mayfield" and his adventures with the NASCAR drug police. How this did not make it to NASCAR Now, SportsCenter or even the local Charlotte area TV stations is amazing.

It will be even more amazing if Mayfield somehow shows up at the Chicagoland Speedway on Thursday. Stranger things have happened. Regardless of Mayfield's guilt or innocence, this comedy of errors is more reminiscent of the Keystone Cops than a top-notch drug testing company working for a professional sports organization.

While ESPN has taken the challenge of reporting on Mayfield head-on, SPEED has gone to any length to avoid dealing with this subject. Only the RaceDay program has broached the subject, with carefully worded comments towing the NASCAR party line. It should be interesting to see if John Roberts and Hermie Sadler update the Mayfield situation on NASCAR Live at 4:30PM ET from the track.

The complete weekend NASCAR TV schedule is posted on the right side of the TDP main page with times, TV announcers and guests listed.

We welcome your comments on the topics discussed above. To add your opinion, just click on the comments button below. This is a family-friendly website, please keep that in mind when posting. Thank you for stopping by and enjoy your Thursday.
Posted by Daly Planet Editor at 5:00 AM 55 comments: