SPEED Returns To Qualifying And Practice At MIS 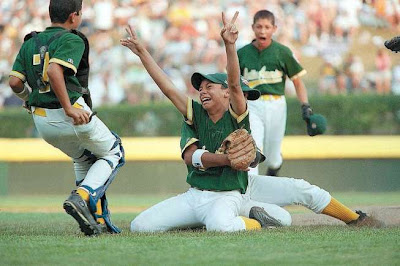 Three races into the seventeen race TV package of the ESPN/ABC group, something comes along each year moves the coverage of practice and qualifying back over to SPEED.

It is something so powerful that nothing can stand in its way. That, my friends, is the Little League World Series.

Arranged well in advance, SPEED is going to once again be in-charge on Friday and Saturday as the network will air over thirteen hours of NASCAR programming. This returns NASCAR to a familiar scenario, as SPEED handles this assignment during both the Fox and TNT portions of the Sprint Cup Schedule.

Both Steve Byrnes and John Roberts may soon consider renegotiating their TV contracts to be paid by the hour. These two are the work-horses of SPEED at the NASCAR tracks and Michigan International Speedway will be no different.

Friday it will be all-Byrnes-all-the-time on SPEED as the network handles everything on the track. The day will begin at Noon Eastern Time with Sprint Cup practice. Byrnes will be joined by Jeff Hammond and Larry McReynolds, this time in the broadcast booth "upstairs" instead of the SPEED Stage.

NASCAR fans are in luck, because during the one hour break at 6PM for Byrnes, Hammond and McReynolds to eat dinner, SPEED will re-air the NASCAR Confidential episode showing the workings of race control and following various officials and inspectors through their day.

Back to work for the crew at 7PM as Trackside is live at MIS and the crowd should be rocking. This show is always a fun way to cap-off the day and get a glimpse into what to expect from both of the weekend races. Larry McReynolds is especially good at keeping fans up-to-date on the stories from the garage.

Saturday, John Roberts hosts NASCAR Live with Randy Pemberton and Hermie Sadler as reporters to kick things off at Noon ET. Byrnes and company return with the first Sprint Cup practice at 12:30PM and then deliver Happy Hour coverage at 1:30PM.

Fans get a chance to compare TV network styles as SPEED offers this coverage for two consecutive weeks. Live tennis coverage and LPGA golf are on the ESPN2 schedule next week, so SPEED will handle all the practice and qualifying sessions from Bristol, TN.

The Daly Planet welcomes comments from readers. Simply click on the COMMENTS button below and follow the easy instructions. The rules for posting are located on the right side of the main page. Thanks again for taking the time to stop by.
Posted by Daly Planet Editor at 1:00 PM 13 comments: