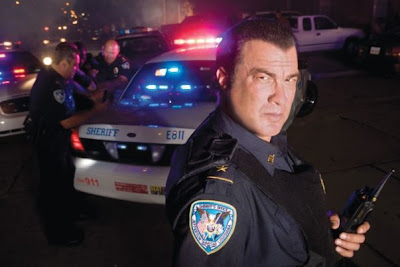 In one of Pete Pistone's many rants against this website and the free expression of opinion on NASCAR television coverage, he dubbed us the "TV police." Well, thanks to Pete that will be the name of our post-race wrap-up for the rest of the season. That's our favorite TV cop above, Steven "The Lawman" Seagal.

NASCAR Countdown was hosted by Allen Bestwick and followed the script of focusing on the Chasers to the letter. A tribute to the late Jim Hunter was brief and did not include any personal observations from the likes of Rusty Wallace, Ray Evernham, Dale Jarrett or Andy Petree.

The program avoided reviewing the yellow line rules on the final lap, despite the controversial finish of the truck series race. Highlights of that race were shown. The final lap and the run to the finish has been a key element of many of the past races at Talladega.

After Bestwick, Brad Daugherty, Wallace and Evernham finished the pre-race show it was up to Marty Reid to call his first Talladega Chase race. His opening focused on the Chasers before introducing Dale Earnhardt Jr. as the in-race reporter. That appears to be a role that Junior does not relish.

Once the race was underway, the difference between the styles of SPEED and ESPN was made very clear. ESPN's tighter perspective meant split-screen shots and cameras zoomed into the pack focusing on the leaders. On Saturday, the truck series telecast featured wide and high-angle shots that showed the track and the entire field.

Putting this race into an exciting TV package depends on the ability of the play-by-play announcer to drive the telecast. In stark contrast to MRN radio, ESPN's Marty Reid has begun simply talking about what is on the TV screen

A true play-by-play announcer like Bestwick, Mike Joy or Eli Gold would have moved fans to the edge of their seats on a regular basis as the pack circulated at almost 200mph. The racing was great, the stories were compelling and once again NASCAR did its part by putting on a great show. Reid was never in that mix.

It seems like ESPN just does not get it. The producer only tells the stories of the leaders, with teams suddenly showing-up who have battled back through the pack unseen. The director frames the racing so tight there is no perspective for TV viewers. Just a clump of cars on the screen and then another clump and another.

Reid struggles with wave arounds, Lucky Dogs and updated information. His limited NASCAR knowledge does not allow him to make easy conversation or references. Make no mistake, Reid is an accomplished TV veteran who was outstanding on the NHRA telecasts for ESPN and has a long history in motorsports.

Regardless of whether it's the communication or the personalities, it's pretty clear that things are just not meshing. Often, the voices from the Infield Pit Studio are much more exciting and informed than the three in the TV booth. Leaving Bestwick and returning to Reid is nothing short of the same letdown viewers experienced with Dr. Jerry Punch in that role.

One bright spot is that Punch has raised the level of pit road reporting and is having a solid season back in the role that he helped to define. Speaking to Dale Earnhardt Jr. after his accident, it was once again clear that Punch had the respect of one of the top drivers in the sport.

During one incident, Reid began to scream that we were having the big one. There was no accident at all, just some good driving. It seemed that Reid and ESPN were going to be very upset without a major accident in the race. It was talked about in NASCAR Now, during NASCAR Countdown and throughout the telecast.

It was somehow fitting that with only nine laps to go, a caution for debris came out and ESPN was unable to find what car caused it or even show a replay. This was the defining moment of the race as the front pack was paired-off and ready for the run to the finish. TV had no answers for what had happened to stop the action.

On the final lap, the director missed the incident that put AJ Allmendinger on his roof. The split-screen effect had the leaders in the big box and some of the field in the smaller one. Tight shots again doomed ESPN as they have for the past four years.

On TV, the final lap was a disjointed mess. On the radio, it sounded like an amazing finish to a fantastic race. MRN had the details and all the information as it happened. It should be interesting to hear your comments on what you saw.

Update: Fan emails asked why no AJ Allmendinger interview post-race. Also, why no Mike Massaro in the ESPN studio instead of a SportsCenter talent. Finally, why didn't ESPN replay various angles of the last lap leaders for TV viewers instead of just waiting for NASCAR to make a decision on the finishing order. All good topics for discussion.

This post is designed to get your opinion of the TV coverage of the Sprint Cup Series race from Talladega on ESPN2 and ESPN. To add your opinion on this topic, just click the comments button below. This is a family-friendly website, please keep that in mind when posting. Thanks for taking the time to share your viewpoint.