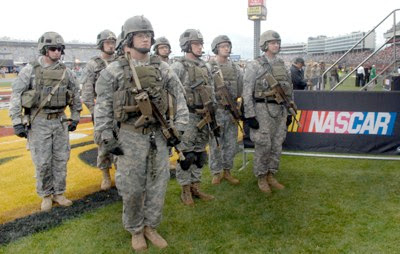 The second half of the motorsports doubleheader is next with the Sprint Cup Series racing in Charlotte. This is the last race for the NASCAR on FOX team.

Chris Myers will start the coverage from the Hollywood Hotel. Darrell Waltrip and Jeff Hammond will be alongside. It is a one-hour version of the pre-race show. This has been one of the parts of the FOX coverage that has struggled. So often, the real stories of the race are not told and the hype, promo and sponsor agendas are put before the NASCAR news.

It should be interesting to see what content FOX chooses to include today. There are NASCAR stories like the Gibbs team feud, the Memorial Day festivities involving the military and the FOX agendas of promoting other sports programming.

Mike Joy will end his TV run with this telecast, but Darrell Waltrip will join SPEED's RaceDay show and Larry McReynolds will move to the infield for the TNT races. Waltrip will fill-in for Kyle Petty over the next six events.

FOX has the strongest team of pit reporters. Steve Byrnes, Krista Voda, Dick Berggren and Matt Yocum have been once again underused this season. Instead of being a big part of the overall telecast, Waltrip and McReynolds have again been featured.

If the FOX director begins this telecast with tight shots of one or two cars, the viewers will head for the exits. 600 miles needs a presentation that makes sense for five hours. That is not random shots of cars while the announcers play catch-up.

No one knows what will unfold in Charlotte between potential weather issues, feuding teammates and COT's with aero issues. The role of TV is to tell the stories as they unfold and let the TV viewers experience the race as if they are at the track.

Good luck to all of the NASCAR on FOX team with their final telecast of the season.

This post will serve to host your comments about the NASCAR on FOX coverage of the Sprint Cup Series from Charlotte. To add your TV-related comments, just click on the comments button below. This is a family-friendly website, please keep that in mind when posting. Thank you for stopping by!
Posted by Daly Planet Editor at 4:40 PM 450 comments: 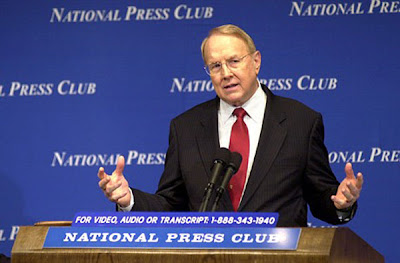 This week, emails arrived on two very different topics. First, the folks at Showtime were promoting the fact that Richard Petty was going to be the featured guest on Inside NASCAR. They also wanted to make sure and remind us that the scanner audio used on the show was uncensored.

Secondly, the Charlotte Motor Speedway announced the line-up of dignitaries for the Coca-Cola 600 on Sunday. The invocation before the race will be delivered by none other than Dr. James Dobson, pictured above. Dobson is the founder of the non-profit Focus on the Family organization. He was called "the nation's most influential evangelical leader" by Time magazine.

Shortly after Showtime posted a video "teaser" of Petty's exclusive Inside NASCAR interview online, the fan anger started again. It centers around the fact that NASCAR fans must subscribe to Showtime just to see this one TV series. There are some rather compelling reasons to discuss that topic.

Dobson fits into the conservative slice of the NASCAR pie, but pushes the envelope with his hardline views on issues like child discipline, religious tolerance and homosexuality. Dobson attracts religious controversy like a magnet.

Inside NASCAR was the first time a TV series was produced by the NASCAR Media Group for a premium network. "Partnering with a brand such as Showtime for a high-end weekly NASCAR magazine news show in primetime is big news for our fans going into a brand new season," said NMG executive Jay Abraham back in January.

Among the other Showtime series is The Secret Diary of a Call Girl that follows the adventures of a high-priced London escort. A reality show called The Real L Word is new this season. It documents the lives of successful lesbians who live in the Los Angeles area. Series like Dexter, the Tudors and Californication are quite familiar to Showtime viewers for a lot more than just catchy titles.

Asking fans to sign-up for Showtime just to see Inside NASCAR avoids the entire issue of adult-oriented programs, including those based on homosexual themes, being on the very same channel. You can't order Inside NASCAR without Family Business being delivered as well.

Dobson also co-founded the Family Research Council back in the 1980's with a man named George Rekers. Many considered Rekers, Dobson and a Colorado pastor named Ted Haggard to be the leading anti-gay activists in the country for years. Then, things changed. Click here to read an article about Rekers and a recent vacation.

It was back in 2006 when the married Haggard admitted to a multi-year homosexual relationship with a male prostitute. He then resigned as the national leader of the evangelical movement. Rekers also resigned but denies he is gay, despite the fact that his vacation companion was hired through a website featuring gay escorts. Haggard now says he is "cured" of his homosexuality and is growing a new Christian ministry in Colorado with his wife.

Showtime's email reminder to the media after last weekend's race was that moments like Kyle Busch calling Denny Hamlin a motherf***er over the team radio could be heard on the Wednesday Inside NASCAR show.

Chris Myers, Brad Daugherty, Randy Pemberton and Michael Waltrip may be the faces on camera, but uncensored scanner traffic is now an important part of the program. Profanity on cable TV to promote stock car racing. That's a new concept.

Smack dab in the middle of this muddled morality mess sits NASCAR.

Dobson in Charlotte surrounded by military heroes on Memorial Day weekend while leading NASCAR fans in prayer on national TV is a de facto stamp of approval by the sport for his teachings and beliefs.

Kyle Busch's profanity-laced tirade and other adult language from teams and drivers is now routinely heard in a TV series being produced by NASCAR at the Hall of Fame studios in Charlotte, NC.

The late Rev. Hal Marchman used to end the Daytona 500 invocation with the words "Shalom and Amen." Although Marchman was a Baptist, he often said that he tried to accommodate all faiths. "I don't ever pray a Baptist prayer or a Catholic prayer -- we're all God's children," Marchman said.

It should be interesting to hear Dobson's invocation on Sunday and then watch Inside NASCAR on Wednesday. Unless Dobson chooses to spice things up quite a bit, he does not stand a chance of making Showtime's NASCAR highlights.

We welcome your comments on the topics above. To add your opinion, just click on the comments button below. This is a family-friendly website, please keep that in mind when posting. Thank you for taking the time to stop by The Daly Planet.
Posted by Daly Planet Editor at 4:00 PM 57 comments: 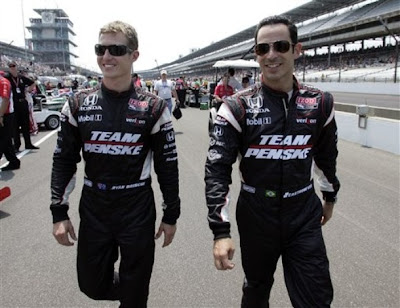 Every year we live blog the Indy 500 because there is simply nothing else like it. Over the past several years the event has seen its ups and downs, but this year the race has come roaring back into the global spotlight.

ABC goes on the air at 12PM ET with a fast-paced one hour pre-race show. Unlike NASCAR, this program is actively coordinated with IndyCar and contains several elements including live driver introductions.

Here is what ESPN put out to the media about the coverage:

ESPN will use 59 cameras to televise the race fully in high definition, including a 360-degree rotating onboard camera mounted behind the driver on multiple cars. Unique views will be provided by Track Cam, a high definition camera running on a cable over pit road and the frontstretch that can move at more than 80 mph. All 33 cars will carry GPS boxes for the Sportvision RaceFX system to provide telemetry and pointers to help identify the cars for viewers. And ESPN will use a radio replay system that can record, playback and edit radios from any of the 33 drivers.

The one-hour pre-race show will include interviews with many of the 33 starting drivers as well as special features, including a look at the up-and-down past year of polesitter and defending race winner Helio Castroneves, from beating tax evasion charges to winning Indy to becoming a father. Ryan Hunter-Reay is featured in an ESPN Sports Science piece comparing driving an IndyCar to flying a fighter jet and drivers who have and have not won at Indy talk about the Blueprint for Success at the famous track. ABC Good Morning America host Robin Roberts, the pace car driver for the Indy 500, conducted a unique sit-down interview with Danica Patrick that will appear both on GMA and in the pre-race show and another feature looks back on ABC’s 46 years at Indy with on-camera interviews with some of the iconic announcers who were part of the history. The telecast also will include a Memorial Day tribute salute to veterans.

ESPN International’s networks and syndication of the Indy 500 will reach more than 252 million households. In addition, U.S. troops serving overseas and on Navy vessels around the world will watch via a broadcast agreement between ESPN and the American Forces Network, bringing the total to 213 countries and territories.

How about that for an attention-getter? ESPN's NASCAR team plays a prominent role in this special live event. Punch returning to Indy for the first time in many years is a great story. Marty Reid has also been putting in solid work on the NASCAR trail and he is tuned-up for this one.

Indy is a mix of strategy, luck and skill. Racing is done on the straightaways and simple mistakes can cause disaster in the corners. Translating this to TV has always been a challenge. Wideshots down the straights have served to be the most efficient camera angle for decades. Restarts in this series often tell the tale.

This post will serve to host your comments about the ABC coverage of the Indy 500. To add your comment, just click on the comments button below. This is a family-friendly website, please keep that in mind when posting. Thanks for taking the time to stop by The Daly Planet.
Posted by Daly Planet Editor at 11:30 AM 311 comments: