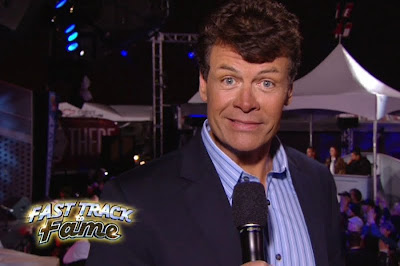 All kinds of things are going on in the NASCAR TV world. Here are some notes:

Tuesday afternoon, Charlotte Observer reporter Jim Utter said on Twitter that he heard SPEED had cancelled What's the Deal? with Jimmy Spencer and Ray Dunlap. As you may recall, this program struggled from the start with a bad set, a rough timeslot and a horrible format. Official comments from SPEED should come Wednesday on both the TV series and Spencer's future role with the network.

On Monday, SPEED confirmed that entertainment director Roger Goodman had been brought in to coordinate production of the NASCAR Hall of Fame induction ceremony. David Hill, who is Chairman of the FOX Sports Media Group, made the call. Hill is now actively involved in the decision making at SPEED since his responsibilities were expanded to include SPEED, FoxSportsNet and the FOX regional sports networks nationwide.

This week has featured the duo of Steve Byrnes and Krista Voda co-hosting the NASCAR Race Hub programs on SPEED. These are the network's two top pro's when it comes to studio shows. Last week, Byrnes said on Twitter that he would be hosting a lot more of Race Hub. That's got to be a tall task for a guy who already hosts Trackside and NASCAR Live, as well as Nationwide Series qualifying and practice sessions. Did we happen to mention Byrnes is also a pit reporter for the NASCAR on FOX races? Yikes!

Fast Track to Fame, SPEED's rather unique Monday night talent show, is drawing to a close. The last scheduled episode is June 7. So, the Monday night 8PM Eastern timeslot is apparently going to see some new program offerings in June. Since This Week in NASCAR was cancelled, the email and comments from fans have been steady. There still seems to be a strong desire to have a one-hour Monday evening review show. Bringing something like this back is made even more tempting by the fact that ESPN2's NASCAR Now continues to be a 5PM ET show with a late night re-air.

"The Weekend Starts on Wednesday" was a book recently released by Andrew Giangola. In it he profiles colorful NASCAR fans. ESPN is featuring select fans from this book on the weekend edition of NASCAR Now. This Saturday at 10AM ET, the feature is on a University of South Carolina professor who is an avid mountain climber. He timed his Mt. Everest effort so that he reached the summit on May 24. You might be able to guess his favorite driver and the flag he planted on the mountain top.

Even after a rough outing in Richmond, ESPN is returning Rusty Wallace to the TV booth this Friday night to work with Marty Reid and Andy Petree in Darlington. Rusty is a multi-car Nationwide Series owner who is often put in the position of dealing with on-track issues that involve his team members. His face-off with Kyle Busch during a recent rain delay should have been a sign to ESPN. It's time for Ricky Craven in the TV booth when Dale Jarrett is away.

The trailer for the film Racing Dreams is now available by clicking here. This documentary will be screened at the NASCAR Hall of Fame on May 18 before being released nationwide. It's a family film with a very good buzz that centers on three youngsters racing go karts.

Wednesday should see updated news from SPEED about talent assignments, new shows and what is next for Monday night. There are also suggestions that major NASCAR sponsor news may break over the next couple of days. Whether that is team, series or race track has not been passed along. It should be interesting.

Whatever happens on Wednesday, we will update this post as well as the TDP Facebook fan page and the TDP Twitter page. We welcome your comments on the topics above. Add your opinion by clicking on the comment button below. Thanks for stopping by!
Posted by Daly Planet Editor at 12:15 AM 26 comments: