Dave Burns Gets The Call For Gateway 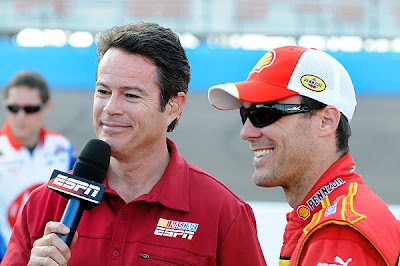 There are few NASCAR TV talent that fly below the radar, but ESPN's Dave Burns has perfected that role. A regular on pit road for four seasons, Burns has hosted several pre-race shows but this weekend gets to tackle a brand new assignment.

As the dominoes continue to fall after the movement of Dr. Jerry Punch from the play-by-play role to pit lane, ESPN is clearly looking for a number two man in the TV booth. Fellow pit reporter Vince Welch already called a Nationwide Series race this season and now Burns get a chance.

It's a one-day Saturday show for ESPN2 at Gateway in St. Louis, MO. Qualifying is at 4:30PM Eastern Time, the pre-race show is at 7PM and the race starts shortly after 8PM.

Burns will handle all three and share the TV booth with Rusty Wallace and Ricky Craven. Mike Massaro, Shannon Spake and Punch will report from pit road. The good news is that all three of the pit reporters are outstanding hosts and can give Burns a break during the pre-race show.

Many TV viewers remember Burns from his rather colorful stints on shows like swamp buggy racing and monster trucks for The Nashville Network. Burns actually got his start calling ASA races in the Midwest. That was a great short track series that gave us Johnny Benson, Mark Martin and other top NASCAR drivers.

Burns' roots in NASCAR TV are strong as he served as a pit reporter for NBC when that network handled a package of Sprint Cup Series races. He also teamed with Punch to work on ESPN during the early years of the Camping World Truck Series.

It should be a good opportunity for this personable announcer to spread his wings a bit and take a shot at calling the play-by-play for once. Gateway has a lot of action and the Nationwide Series should put on a good show.

There are 49 cars on the entry list, so qualifying should be interesting. Kevin Harvick, Carl Edwards and Brad Keselowski are all racing so there may well be two shows on the track for this event. It would be nice to see a full field of cars actually racing the entire event for once this season.

This is a good opportunity for Burns to get himself on the short list of on-air personalities who can fill-in for Marty Reid when he is off working the IndyCar circuit. It seems that Allen Bestwick and Welch are the others on the network's list.

Best of luck to Burns, we would be happy to take your comments on this topic. To add your opinion, just click on the comments button below. This is a family-friendly website, please keep that in mind when posting. Thanks for stopping by.
Posted by Daly Planet Editor at 7:48 PM 13 comments: 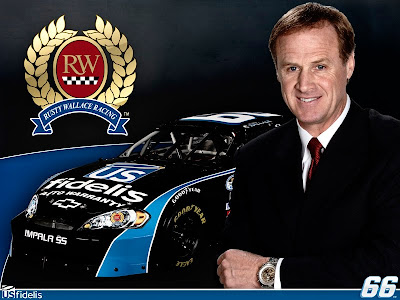 Here is a Wednesday recap of some of the NASCAR TV/media topics happening now and on the radar for later this week.

Rusty Wallace has admitted what many of us suspected, that he is the "Dumbass" culprit:

“At the end of Friday night’s telecast, I made an unfortunate remark regarding Kyle Busch,” Wallace said. “There’s no excuse and I certainly know better. I would like to take this opportunity to apologize to everyone, including Kyle, for my mistake.”

“ESPN has spoken to Rusty and he understands his remarks were uncalled for,” ESPN said in a statement to SceneDaily.com.

The Wallace admission gets the other members of the TV team off the hook, but continues to keep the issue of using NASCAR owners as TV analysts very active.

Click here for the most recent update in the horrific US Fidelis scandal. As pictured above, Wallace assured NASCAR fans in TV ads that buying extended warranties from this company had his seal of approval. Apparently, there is plenty of "Dumbass" to go around where Wallace is concerned.

ESPN has no plans to make changes and both Wallace and Brad Daugherty will continue with their roles on the Nationwide and Sprint Cup Series telecasts.

On that note, it will be ESPN's Dave Burns who will get an opportunity to call the play-by-play on the Nationwide Series race this weekend from St. Louis, MO. Burns will be joined by Wallace and Ricky Craven in the TV booth. Both Burns and fellow pit reporter Vince Welch are going to be put in this role as ESPN continues to work on its NASCAR line-up.

Well, TNT went out this season with a whimper instead of a bang:

A lackluster run in the ratings for NASCAR on TNT concluded with record lows for the Lifelock.com 400.

This marks the lowest rated, least-viewed edition of the Lifelock.com 400 in the nine-year history of the race. As recently as 2005, the race drew a 5.7 rating and 8.958 million viewers. Ratings and viewership have declined each successive year. (from SportsMediaWatch.net)

Not sure if this is a statement on the Chicagoland track, the quality of the TV telecast or the time of the year. Anyway you slice it, not good news.

SPEED has jumped into the Legends world with coverage of the big race on Saturday night:

More than 300 drivers from 36 states and two foreign countries have registered for the one-of-a-kind grassroots Legends Cars race featuring a total purse of $1 million. The A-Feature winner is guaranteed to take home an unprecedented $250,000, while the final spot in the feature is assured $10,000.

This should be interesting, but three hours of Legends racing is a lot.

Finally, click here to read about a huge new partnership between some big hitters aimed at taking on ESPN's online prowess. This article is interesting because NASCAR.com is squarely in the mix. As they say, this could change everything. Thanks to Ken and our friends at the Sports Video Group for the article.

We will update any other stories that pop-up on Wednesday. The NASCAR Fan Council, classic NASCAR races on iTunes and more RaceBuddy this year are on the front burner.

In the meantime, please feel free to give us your comments on these topics. To add your opinion, just click on the comments button below. This is a family-friendly website, please keep that in mind when posting. Thanks for stopping by.
Posted by Daly Planet Editor at 12:30 AM 36 comments: